The race appears to be tightening after Week One

Politics Insider for Aug. 23: Trudeau plans to go on the offensive, Tories are happy with their first week and why it might be time to keep an eye on Jagmeet Singh 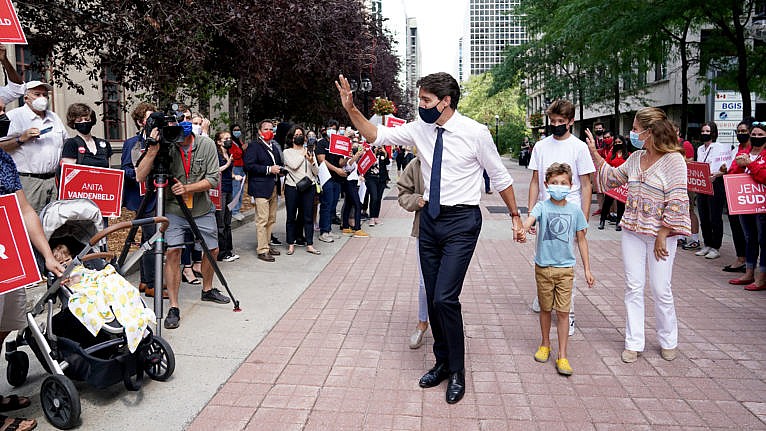 Justin Trudeau greets a crowd of supporters with his family in tow after triggering a federal election, in Ottawa, Aug. 15, 2021. (CP/Sean Kilpatrick)

Maclean’s poll decipherer Philippe J. Fournier surveys the ground after the first week of the campaign and finds support for the Liberals appears to be softening, although they seem to still be ahead.  The polls “suggest the Liberals remain in the driver seat, and are headed towards either a stronger minority or a razor-thin majority,” but two daily rolling polls have “detected a significant tightening of the race between the main parties.”

An anonymous senior Liberal tells the Star’s Alex Boutilier that the party plans to go on the offensive after a tough first week. Justin Trudeau took a day off Saturday after a week in which he “was repeatedly asked to explain why he called a snap election, faced questions about the ongoing crisis in Afghanistan, and processed the provincial Liberals’ loss in Nova Scotia.”

“Stay tuned for the coming days, because I think there will be a lot more that (Trudeau) and the party will have on offer that will be in tune with some of the big thinking that we brought to the fore not just over the last few days but the past number of months,” the Liberal said. “The policies and proposals and ideas, there will be some pretty clear contrasts (with other parties).”

Sure enough, on Sunday, Trudeau flew into Miramachi, N.B., where he criticized Blane Higgs‘ refusal to sign onto a federal daycare plan and his refusal to fund abortions performed at private clinics, CBC reports.

Happy Tories: The Conservatives feel good about the first week, they tell CBC.

Health crisis: On Sunday, Erin O’Toole was in New Westminster, B.C., to propose a plan to treat the opioid epidemic as an “urgent health crisis,” the Globe reports. In a contrast with earlier CPC leaders, he said he would support safe injection sites, and promised $325 million over the next three years to create 1,000 residential drug treatment beds and build 50 recovery centres across the country.

No debate for Max: The leaders’ debates this year  — to be held Sept. 8 and 9 — will not feature Maxime Bernier, the Canadian Press reports. “I do not blame the Commission, whose criteria were clear and objective,” Bernier said in a news release. “Rather I blame the political establishment cartel, which refuses to debate the crucial issues we raise and has done everything to marginalize us since the founding of the PPC.”

Endangering lives: In Maclean’s Paul Wells talks to retired major-general David Fraser, who is part of a group trying to get trying to get 1,650 people out of Afghanistan. Advocates trying to help Afghans say Canadian bureaucrats have been slow to act and to process applications of candidates for transport.

The Canadian government needs to provide “clear guidance” to those people trying to get out, Fraser said. “When do they want them to move? Where do they want them to go? And keep it simple. Because we’ve got groups that have been sitting on the ground 12, 24, 36 hours, making the trip [from safe places around Kabul to the fences and crowds surrounding Kabul’s airport] two or three times. And the conditions—I can’t describe. They have to go through Taliban checkpoints, Afghan security checkpoints, a sea of humanity, panic, to get up to a gate to find somebody to connect with and identify with.”

The right thing to do: Afghanistan veteran Capt. Trevor Greene is observing with sadness events in Afghanistan but they have not shaken his conviction that Canada was right to fight there, he tells the Star. “If we had not joined the war, I think we would have regretted it. Because it was the right thing to do. It was my generation’s evil to fight.”

Capt. Greene is angry that Trudeau called an election when he did: “I’m disgusted. And I’m horrified and really pissed off at the Prime Minister. On the day Afghanistan fell to the enemy, he announced an election. And that just incenses me. I was raging at the TV when I saw that. What he did was he dishonoured those of us who bled there.”

Left behind: Kevin Newman has a disturbing article in the Line about a group of about 100 Afghan support staff who appear to have been left by Canada to fend for themselves in a gas bar near the airport where Canadian flights are leaving. Newman, a former Afghanistan correspondent, had another article Friday  in which he denounced Canada as “slow, risk-averse and selfish.”

CBC has an interview with former Afghan journalist Qais Azimy, who believes Canada should not have promised to resettle so many Afghans without people on the ground to process the requests.

Outside the wire? Harjit Sajjan said Sunday that Canadian special forces have been given the “flexibility” to leave the airport to get Canadians and former Afghan support staff for evacuation, the Globe reports.

Danforth–Layton? In Toronto on Sunday, Jagmeet Singh held an event with Mike Layton to announce the party would introduce a bill to rename the riding of Toronto–Danforth to Danforth–Layton after Mike’s father, Jack. CBC has the story.

In the Star, Jaime Watt suggests we all keep an eye on Singh, “a young, racialized leader who is tuned into the issues of the day.”

Green EQ: In Saint-Hyacinthe on Sunday, Yves-François Blanchet proposed a new equalization system, that would provide extra equalization money to Quebec because of its successful efforts to reduce emissions, la Presse Canadienne reports.