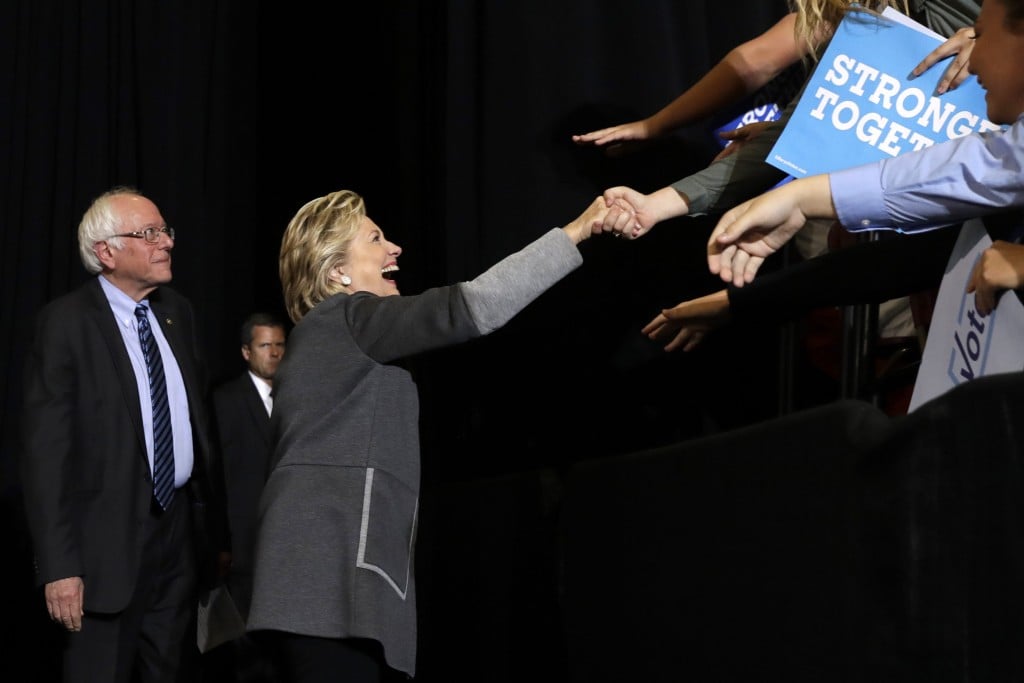 Sept. 28, 2016: Still feeling a surge after the first debate, Hillary Clinton’s team is targeting the battleground state of Florida, considered a must-win for Trump if he wants to become president. Meanwhile, in another competitive state, a Republican-leaning newspaper in Arizona endorsed Clinton, marking the first time in the paper’s long history it endorsed a Democrat for president. Trump, meanwhile, is preparing for the next presidential debate by asking his supporters which topics they’d like him to focus on when he squares off against Clinton.

Clinton doesn’t necessarily need to win Florida to become the next president of the United States. But with 29 electoral votes at play—nearly the equivalent to winning North Carolina, Colorado, and Nevada’s combined 30 electoral votes—Clinton’s camp is reportedly starting to panic about losing Florida. The problem? Minorities aren’t going to turn up in the same kind of numbers they did for Barack Obama.

Her solution: Send in reinforcements. Not only does Obama plan to campaign at least twice on Clinton’s behalf in Florida before Election Day, her campaign just released a radio ad narrated by first lady Michelle Obama.

Meanwhile, former president Bill Clinton will be travelling across Florida by bus, starting on Friday, to get out the African-American vote. Right now, the polls are practically a coin flip for who wins Florida.

After Monday’s debate, Trump was immediately tweeting about his supposed win, as “proven” by unscientific online polls—the ones where anyone could click and vote multiple times. On three occasions, Fox News hosts referenced these polls as proof of Trump’s win. But they probably won’t be doing much of that anymore.

Such a great honor. Final debate polls are in – and the MOVEMENT wins!#AmericaFirst #MAGA #ImWithYouhttps://t.co/3KWOl2ibaW pic.twitter.com/sfCEE3I5pF

Fox News VP of public-opinion research Dana Blanton reportedly told the network’s TV producers not to give these unscientific online polls much credence on air as they “do not meet our editorial standards.” In a memo obtained by Business Insider, Blanton wrote, “News networks and other organizations go to great effort and rigor to conduct scientific polls—for good reason.” She added later that the online polls referenced previously “are nonsense, not true measures of public opinion.”

Obama knows that Trump hasn’t been able to rouse black voters. But he also knows if African-Americans don’t show up at voting booths for Clinton this election, as they did for him four and eight years ago, Obama may be cleaning out his room at the White House to make room for a President Trump. With that in mind, Obama called in Wednesday morning to chat on the radio show of Steve Harvey (he of Family Feud fame and Miss Universe infamy) with a message for black voters: “If you don’t vote, that’s a vote for Trump. If you vote for a third-party candidate who’s got no chance to win, that’s a vote for Trump. […] My legacy’s on the ballot. All the work we’ve done over the last eight years is on the ballot.”

Debate prep: What do you think I should do?

After a lacklustre first debate in which many criticized Trump for a lack of preparation, the Republican nominee is asking his own followers what he should prepare for in the second debate. In a campaign email, the 30-question survey asks which topics people felt Trump was strongest, and whether or not she should have brought up certain topics—from Clinton’s role in Benghazi to her calling half of Trump supporters “deplorables.”

If the survey shows people believe he should spend more time highlighting his plans and attack Clinton on every scandal he lays out, then Trump’s got a lot of prep to do with less than two weeks until the next debate.

The Arizona Republic is a pretty conservative paper. In its Wednesday editorial, the paper said that since its launch way back in 1890, the paper has “never endorsed a Democrat over a Republican for president. Never.” But it also wrote that this year is different—which is why the paper is endorsing Clinton. The editorial explained how Trump’s flaws are deeper than Clinton’s, how Arizona already tried a hardline approach to curb illegal immigration (it failed), and how Trump panders without offering real solutions.

You can add the Arizona Republic to a growing list of papers endorsing a Democrat for the first time. And it’s not just right-wing papers either: on Wednesday, John Warner—the popular Republican state senator for Virginia from 1979 to 2009—said he’d be voting for Clinton this November.

Trump’s doctor’s letter, which the candidate provided after his appearance on Dr. Oz, showed the Republican’s body mass index is hovering around 30: borderline obese. So in the aftermath of Trump complaining about a former Miss Universe—repeating on Fox & Friends earlier this week that “she was a winner, and she gained a massive amount of weight. It was a real problem”—Democratic Sen. Claire McCaskill called on Twitter for Trump to have daily weigh-ins.

The D women Senators have talked & we’re concerned about Donald’s weight. Campaign stress? We think a public daily weigh-in is called for.

When asked if she was joking, she tweeted back: “Ummm. Yes. Obviously. A pointed one.”

The saddest poll of the day

American politics are so divided, friendships are breaking up. According to a Monmouth University poll released Wednesday, seven per cent of respondents said this presidential race has cost them friendships—and more often it’s the Clinton supporters saying that they’re losing friends or ending things.

No person speaks in absolutely perfect sentence structure. But if it sounds like Trump is often repeating himself—and not saying a lot with a whole lot of words—it’s because he might be. One of the New Yorker’s copy editors took a stab at copy-editing Trump’s words from the first debate to make it clearer.