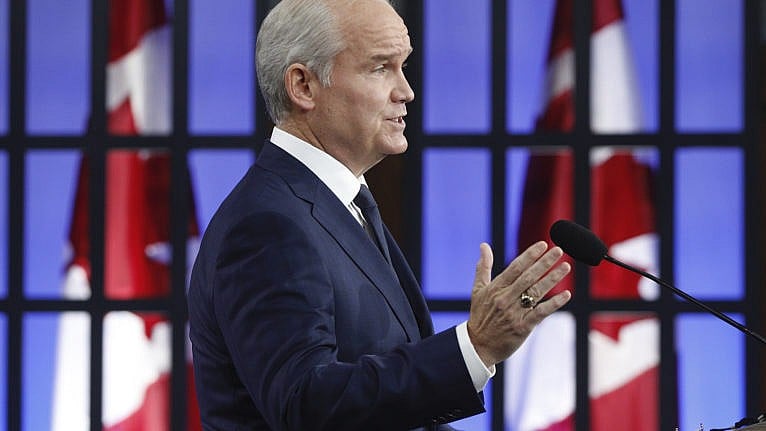 As the Liberals and Conservatives trade attacks on health care, Paul Wells takes us back to 2000 to remind us of the time that Stockwell Day “held up a hand-lettered NO 2-TIER HEALTH CARE sign.”

This election, like every election since, has revolved around misleading claims on health care, giving Wells a “weapons-grade case of déjà vu.” He notes the debate often works out well, electorally, for the Liberals.

So that’s two decades of Liberals warning, in effect, that only Liberals can be trusted to deliver the kind of health system Conservatives keep promising. It’s sometimes said that only Nixon could go to China. When it comes to health care, the preferred Liberal model is one in which Nixon never leaves China.

It works! Speaking of that, it seems to be working again, according to the Nanos tracking poll, as CTV reports.

The latest nightly tracking shows the Liberals at 35.9 per cent, the Conservatives  at 32.7 per cent, and the NDP down to 16.8 per cent. Likely that’s because of health care, Nick Nanos says: “Maybe this is working. We talked about in the past that last week was about the Liberals and their numbers suffered… didn’t we say they were going to throw the kitchen sink and the kitchen table and the chairs? Well, they did. It looks like that’s in the form of a health-care attack on Erin O’Toole.”

O Brother, Where Art Thou? Maryam Monsef, Justin Trudeau’s minister of women and gender equality, called the Taliban “our brothers” at a press conference Wednesday, which she says is a “cultural reference,” CTV reports. The Sun, which thinks it is bad, has video. Monsef, who was born in Iran and raised in Afghanistan, asked the Taliban for mercy. “I want to take this opportunity to speak with our brothers, the Taliban. We call on you to ensure the safe and secure passage of any individual in Afghanistan out of the country. Erin O’Toole criticized her remarks: “The language used by the Trudeau government is completely unacceptable. I think of the women and girls in Afghanistan who are at risk with the Taliban regime once again coming into place.”

In the Sun, Afghan Canadian Zahra Sultani writes that she is not buying Monsef’s cultural explanation.

On the ground: In the Star, Saba Eitizaz has a heart-rending piece about a diplomat in Afghanistan trying to avoid the Taliban and look after his family.

The fact that thousands of vulnerable and at-risk Afghans would need to be evacuated should not have been the surprise it appeared to be from the chaos on ground. According to the UNHCR, the UN Refugee Agency, 250,000 Afghans have fled their homes since the U.S. troop withdrawal and fighting began. Heartbreaking cries for help are getting lost in the shuffle of paperwork, red tape and exhausting demands made by foreign governments as the clock ticks down.

Winding down: Canada’s last flight out will be on Aug. 26, the Globe reports.

Expect it to get worse: One Canadian foreign affairs expert tells Global it will be “extraordinarily difficult, probably impossible for Canada to make any realistic assurance of a safety guarantee,” after the Aug. 31 deadline the Americans and Taliban agreed on.

Taxing corporations: After getting hit by the NDP on inequality issues every day since the campaign began, Trudeau promised in Surrey Wednesday to raise the corporate taxes paid by Canada’s “largest and most profitable” financial services firms to help pay for a housing program, the CBC reports. Trudeau would raise the corporate income tax rate to 18 per cent from 15 per cent on bank and insurance companies that earn more than $1 billion to “support middle-class Canadians in their goal of home ownership.”

Mental health money: O’Toole promised Wednesday that he would increase funding for mental health support for Canadians by increasing transfers to provinces, CBC reports. He has promised to increase the Canada Health Transfer to provinces by six per cent each year for the next 10 years. While O’Toole has said he would not dictate how the provinces and territories spend this new money, he said he’d work with them to ensure mental health is a “priority,” allowing them to ensure “an additional million Canadians to receive mental health treatment every year.”

Lower mobile bills: In Windsor on Wednesday, Jagmeet Singh promised to force phone companies to cut their prices, Global reports. “What it really takes is having the courage to do so.” Singh said his plan would save the average family $1,000.
Why no briefings? CTV’s Rachel Aiello has a good story wondering why the Public Health Agency of Canada hasn’t had any pandemic or vaccine briefings since the election was called. The agency has issued one statement, last Friday, reporting cases were up 38 per cent from the previous week, which might not be a helpful to the Liberals, since they called an election during a pandemic. Trudeau told reporters the agency is free to do as it likes, but dodged follow-up questions and didn’t directly answer when asked whether he told PHAC to hold off on any press conferences during the election.
Shameless: The Globe has a funny column from Andrew Coyne, who dissects O’Toole’s shifting policy positions and finds a “talent for double-talk” that ought to serve him well in his chosen field.

The Conservatives under Sir John A. Macdonald mowed down a succession of high-minded Liberal leaders, until the Grits recruited a leader, in Sir Wilfrid Laurier, who was just as eely as Macdonald. The Progressive Conservatives ran through Bob Stanfield and Joe Clark, fine men both, before settling on Brian Mulroney, who must have left his sense of shame in his other pants. Most recently, the Liberals dutifully selected as their leaders first Stéphane Dion, then Michael Ignatieff–decent, principled, and thoughtful to boot–then ran off with Justin Trudeau, who is floridly none of these.