Green Party leader apologizes for taste in jokes, her lack of respect for her parliamentary colleagues and her choice of language. 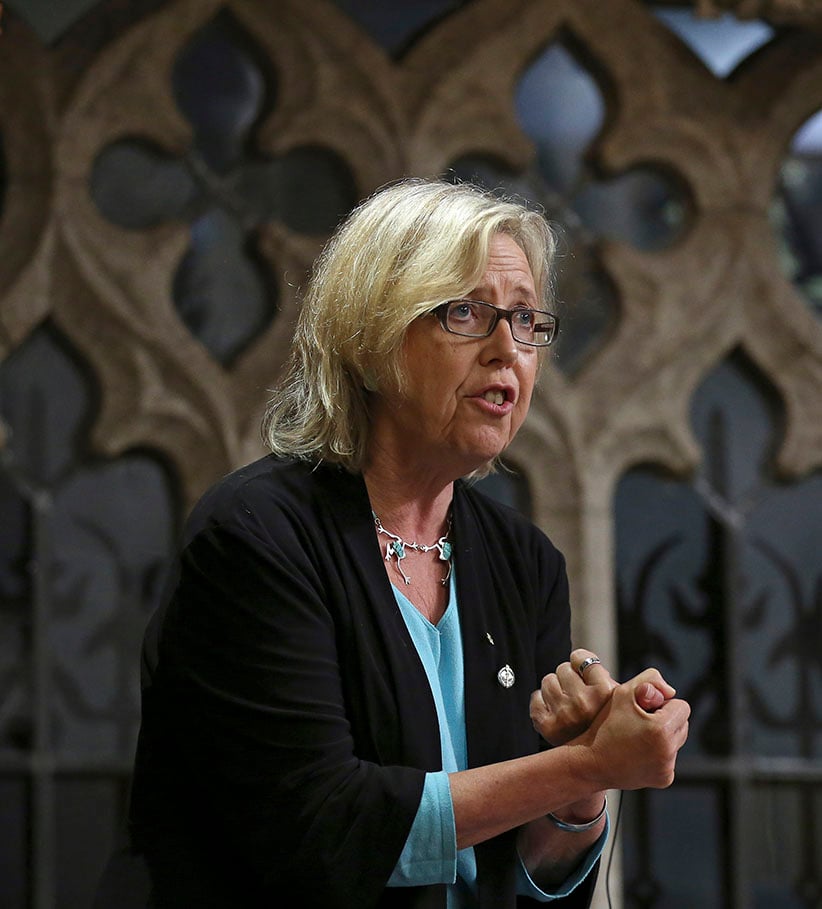 OTTAWA — Green party Leader Elizabeth May says she is “very apologetic” about remarks she made on the weekend that included profanity and insulted the federal cabinet about how it has treated Omar Khadr.

May was among party leaders who addressed Parliament Hill journalists and politicians on Saturday night at their annual press gallery dinner.

But May went on at length about being the only female leader and having to claw her way into televised leaders’ debates.

Transport Minister Lisa Raitt intervened and attempted to persuade May to end her speech, but instead, May played a recording of “Welcome back Kotter” — a theme song from a 1970s sitcom — and stated that Khadr has “more class than the whole f—ing cabinet.”

In a phone interview on Sunday, a hoarse May expressed her regrets for her taste in jokes, her lack of respect for her parliamentary colleagues and her choice of language.

“I wouldn’t want anyone to think I was less than respectful for the people with whom I work,” May said. “I apologize that I made an attempt to be funny and edgy….and it didn’t work.”

May said she was just getting over the flu, had put in a 21-hour work day on Friday, and then had to rise early in British Columbia on Saturday morning to make it to the press gallery event in Gatineau, Que.

“My funny speech wasn’t funny. That’s not the first time a politician has done that.”

In the Khadr section of her speech, May said she meant to make the point that Canada is a country that gives people second chances, and that she hopes Canadians welcome him into their midst.

Khadr, a former Guantanamo Bay prisoner, was set free on bail last Thursday despite repeated attempts by the federal government to keep him behind bars in Canada.

Now 28, Khadr pleaded guilty in October 2010 before a widely discredited military commission to five war crimes — including murder in the death of Speer, a U.S. special forces soldier.

Khadr spent almost 13 years behind bars — four of them as a convicted war criminal.

He was captured, badly wounded, by American forces in Afghanistan in July 2002, when he was 15 years old. At one time, he was the youngest prisoner at the American prison compound in Guantanamo Bay.

May’s remarks left many at the Saturday night gala wondering what had come over her, and sparked a Twitter storm on Sunday.

May said she had no hard feelings towards Raitt for intervening in her speech, and said the two women are friends.