Elizabeth Warren was a formidable candidate. What happened? 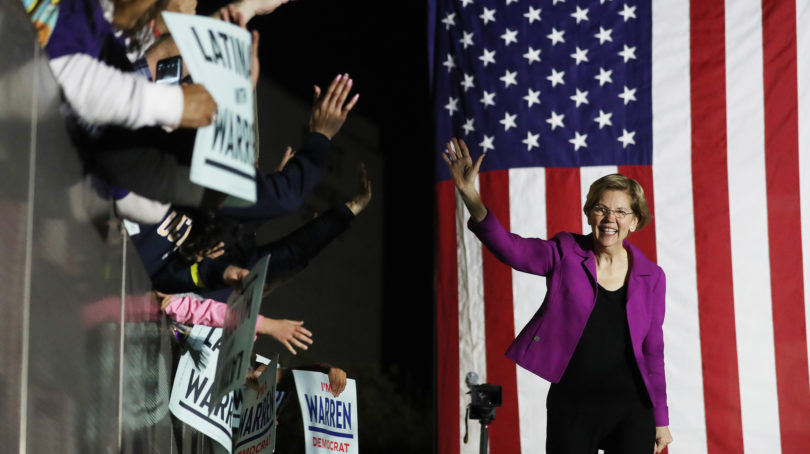 In one of the crueller predictions of the Democratic race for the presidency, nobody—not a single poll—foresaw Senator Elizabeth Warren winning her home state of Massachusetts on Super Tuesday. But it still has to sting for her to come third, losing to both Senator Bernie Sanders (who was expected to win) and former vice-president Joe Biden (who’s risen from his New England grave after collapsing in the New Hampshire primary).

And yet, taking the stage awkwardly early on Tuesday night, before many states had even closed their polls, she sounded defiant.

“You don’t get what you don’t fight for,” she proclaimed with a beaming smile. “I am in this fight!”

READ MORE: Elizabeth Warren, once at the back of the pack, is rallying like a contender

Elizabeth Warren’s campaign trajectory has emerged as arguably the strangest of the entire race. She entered as a sterling progressive, vying for Sanders’s turf by attacking billionaires and promising Medicare for All. For a minute, the former Harvard law professor looked like the one to beat, adopting many of Sanders’s radical ideas while balancing a rags-to-riches background, sincere Christian values and unapologetic feminism. She offered something for everyone: better paid teachers, women’s rights, free health care, eased student debt, affordable housing. And, as she liked to constantly remind everyone, she had a plan for it all.

Throughout 2019, however, she blipped into first place only a couple times. By the year’s end, after failing to steal away enough of Sanders’s supporters, somewhat inexplicably, she zagged into Biden’s territory, proudly calling herself a capitalist and couching her Medicare for All plan in a transition period that looked awfully similar to Pete Buttigieg’s clumsily half-progressive “Medicare for All Who Want It”. Her student debt-relief plan, she revealed, would differ from Sanders’s $1.6-trillion-nix-it-all strategy by maxing out at $50,000 in relief for anyone making less than $100,000 annually. (Those making between $100,000 and $250,000 would see even less, and anyone wealthier wouldn’t catch a break at all.) Aligning with her brand, it was more logical than radical.

And so began a few months of pitching herself as the “unity” candidate, trying to tackle Biden head-on. By the time Super Tuesday rolled around, it was clear that didn’t work. Moderates felt she was too unelectable (or, sadly, perhaps just too female), while progressives felt betrayed. She’d been outdone by Biden’s establishment support, Sanders’s grassroots organization and Mike Bloomberg’s self-funded multibillion-dollar campaign. After proclaiming she “won’t take a dime of PAC money” in February 2019, one year later, she accepted many multitudes of dimes—$14 million from a shady super PAC, to be exact. She attributed the flip-flop to feminism, arguing she couldn’t keep up with the big boys’ budgets. It was not entirely convincing.

RELATED: Elizabeth Warren, haunted by ghosts of sexism past

Rather than win over moderates and progressives, she alienated both groups. Instead of shaving support from Biden and Sanders, she likely bled votes in their favour. She couldn’t win over any communities of colour. The only former rival to endorse her was the barely known Julian Castro, while bigger names like Buttigieg, Amy Klobuchar and Beto O’Rourke all gleefully sided with Biden just hours before Mar. 3. Despite a resounding debate victory at the cost of Bloomberg’s dignity, and having raised $29 million in February, she failed to win a single state, in some cases coming in an embarrassing fourth to Mike Bloomberg—like in Oklahoma, the state where she was born.

One of her campaign slogans may sum it up. “Nevertheless, she persisted,” boasts her swag. Warren’s campaign staff remains convinced she has a path to the presidency. In fact, if you ask them, almost everything is going according to plan.

Step one is already done: outlast all candidates polling at less than 10 per cent nationally. After Buttigieg, Klobuchar and Tom Steyer recently dropped out, a whole slew of votes came up for grabs. Many flocked to Biden’s camp, sure, but clearly not enough to win him decisive victories in enough states.

That indecision will likely lead to a protracted race and possibly a contested convention, which is what Warren’s team is banking on.

RELATED: Iowa, Wolf Blitzer, and the end of America

“As the dust settles after March 3, the reality of this race will be clear: no candidate will likely have a path to the majority of delegates needed to win an outright claim to the Democratic nomination,” wrote Roger Lau, Warren’s campaign manager, in a recent memo posted on Medium. “Our grassroots campaign is built to compete in every state and territory and ultimately prevail at the national convention in Milwaukee.”

Opaquely, that’s where the memo ends. Lau does not explain how, exactly, Warren is supposed to win at a contested convention—especially when, according to new Democratic National Committee rules, after the election is contested, the super delegates—the governors, senators, former presidents and party insiders who essentially define the Democratic establishment—are allowed to step in as arbiters. Who among them will jump out in favour of Warren over Biden?

Her staffers hope more voters will vote with their hearts, rather than resigning themselves to supporting Biden. Data suggests Warren is in fact many Democrats’ first choice, but those same voters simply don’t think she’s electable. Maybe if she sticks around, she must believe, that perception will change.

It’s clear from Lau’s memo, published Mar. 1, that Warren’s camp assumed Buttigieg and Klobuchar would last at least until Super Tuesday and siphon support away from the frontrunners. Unfortunately for Warren, both those moderate candidates dropped out and loudly endorsed Biden hours before the pivotal night. As of this writing, she was trailing Bloomberg in total delegates, having earned just 19 across the country, ranking fifth overall. Buttigieg, who won Iowa before dropping out, is still in third place.

So, yes, it’s still early. If Biden 2020 has taught us anything, it’s that early losses do not spell the end of the campaign trail. But at least Biden knew Southern states were waiting for him. Warren’s whole strategy has hinged on having a plan for everything. Surely she knows the old joke: if you want to make God laugh, make a plan.

Correction, March 5, 2020: The original version of this post described Warren as a former Yale law professor; in fact, she is a former Harvard law professor