Elsie Wayne dead at the age of 84 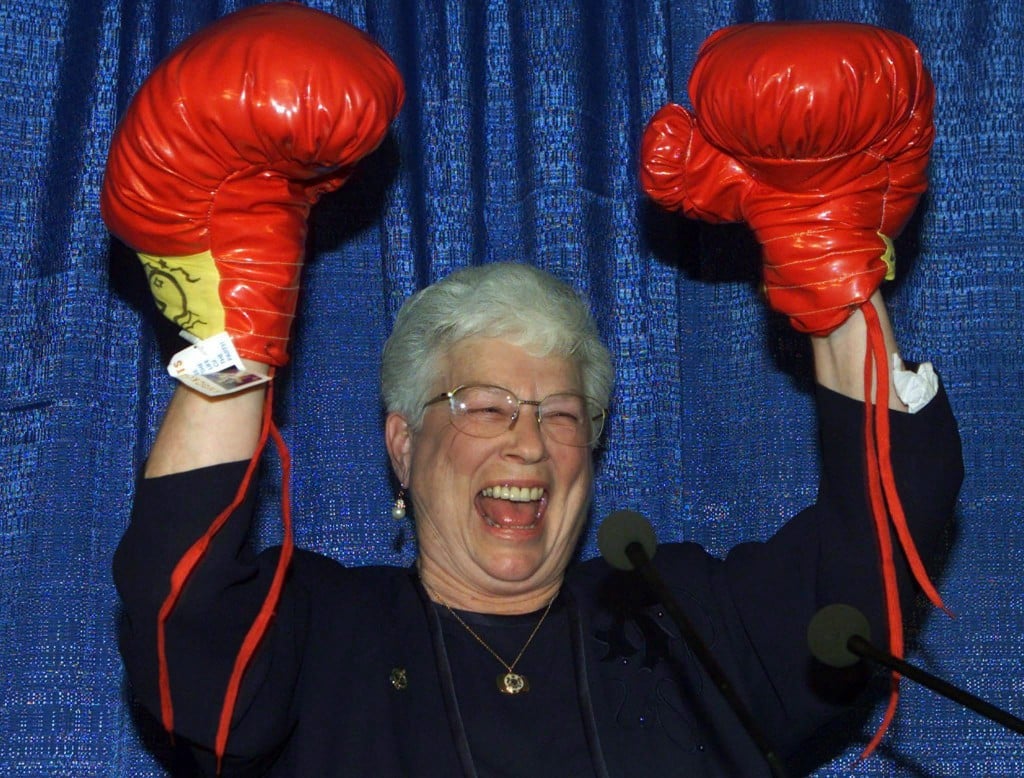 Conservative candidate for Saint John, Elsie Wayne, raises her hands after receiving a pair of boxing gloves from a man dressed in a blue Santa suit during her nomination meeting in Saint John, N.B. Monday Oct. 23, 2000. Wayne, the former mayor of Saint John who was one of only two Conservative M-P’s left standing in the 1993 federal election, has died. THE CANADIAN PRESS/Jacques Boissinot

SAINT JOHN, N.B. – When Elsie Wayne called Saint John, N.B., “the greatest little city in the east,” she made you believe it — and it was that unassailable love of her city that carried her to prominence during a 29-year career in Canadian politics.

The former mayor and New Brunswick member of Parliament has died at the age of 84.

The death was confirmed Tuesday morning by the province’s official Opposition, saying she had died peacefully in her sleep. News of her passing prompted an outpouring of tributes and memories on social media from a wide cross-section of past and present politicians.

“She was one of the last of the large political personalities in Canada,” said former New Brunswick Liberal premier Frank McKenna.

“She shunned political correctness; she said what she thought; she was passionate about what she believed in; she was feisty; and she was intensely loyal to her causes, particularly the city of Saint John.”

Born in Shediac, N.B., Elsie (Fairweather) Wayne moved to Saint John at an early age. She was first elected to Saint John common council in 1977 and became the city’s first female mayor in 1983.

McKenna said, despite the fact they came from different political backgrounds, he and Wayne worked well together, trying to complete many projects in a short period of time.

“Even though sometimes her methods might lack a bit of finesse, nobody could doubt her motivation, it was always in the best interest of Saint John,” McKenna said.

In 1993, Wayne and Jean Charest were the only Progressive Conservative MPs to win their seats in the House of Commons. She represented the riding of Saint John until 2004.

“From the beginning, she was up to the task and never complained about the fact she had been dealt this hand of politics that left her in the rebuilding mode of a political party,” Charest told The Canadian Press.

“She was extraordinary, flamboyant, she said what she thought. She was also very intelligent. But she was the best member of Parliament I ever saw to defend lost causes.”

Trevor Holder, a longtime Tory member of the New Brunswick legislature, called Wayne a “one of a kind.”

“You knew that she was the same person if she was in a boardroom in Toronto, fighting for the interests of Saint John, as she was walking through the City Market. I think that’s what made Elsie special. I think people had a sense that they could reach out and touch her at any time.”

Wayne quickly earned a reputation as a fierce combatant on issues she cared about — the City of Saint John, funding for the Canadian Forces and benefits for merchant mariners.

She was one of only a handful of Canadian politicians known simply by her first name.

In early 2004 she drew criticism for her remarks during debate on same-sex marriage.

During a speech, Wayne said she wondered why men would want to appear “dressed up as women on floats” in gay pride parades.

She also suggested gays and lesbians were only seeking publicity by campaigning for the right to marry.

“If they are going to live together, they can go live together and shut up about it,” she said. The comments drew a rebuke from Scott Brison, her former colleague in the Tory caucus, who described her views as “rabid prejudice.”

She was also known for her staunch opposition to abortion.

During a news conference in 2001, she applauded then-New Brunswick premier Bernard Lord for refusing to fund abortions at the Morgentaler clinic in Fredericton.

The Conservative premier “does not want to have Morgentaler there killing babies every day,” Wayne said.

Despite the odd controversy, Wayne retired from politics in 2004 without ever having lost an election.

She suffered a stroke in November 2009.

“She was never afraid to speak her mind and served her people, her city, her province and her country well. It is with a profound feeling of respect that we say farewell to this grand lady,” Fitch said.

Paul Zed entered federal politics at the same time as Wayne, and was the Liberal member for the neighbouring riding of Fundy-Royal. He later won Wayne’s former Saint John riding in 2004 when she didn’t run.

He spoke of Wayne’s death in a posting on social media Tuesday.

“Elsie’s passion for Saint John will never be forgotten, she will always be our Iron Lady,” Zed wrote.

Wayne was married to Richard Wayne and they had two sons, Daniel and Stephen.

Funeral arrangements were not immediately known.