The Conservative MPs may be seat mates in the House of Commons, but their leadership campaignss couldn't be much farther apart 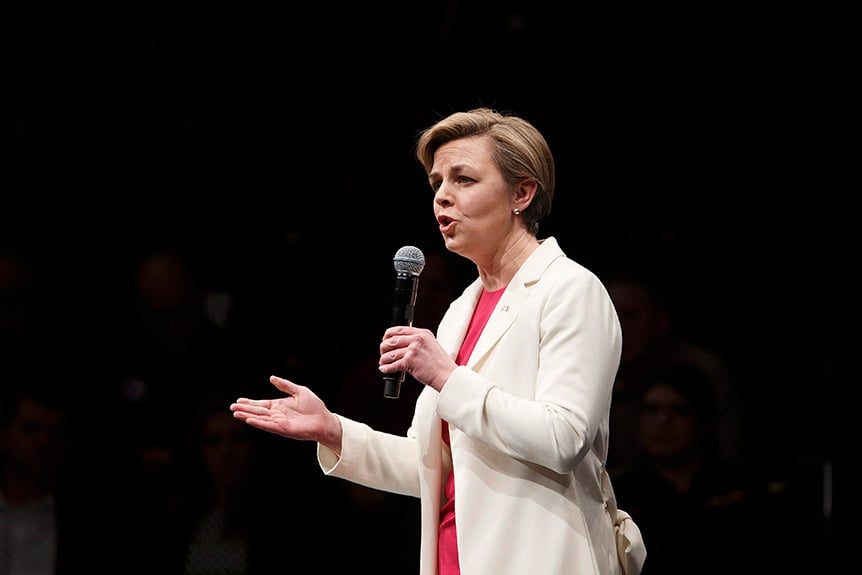 Kellie Leitch speaks during the Conservative leadership debate at the Maclab Theatre in Edmonton, Alta., on Tuesday, Feb. 28, 2017. (THE CANADIAN PRESS/Codie McLachlan)

Leitch didn’t mind — she found a much better place to sit, right in front.

The two Conservative MPs may be seat mates in the back row of the House of Commons these days, but their campaigns to take over the permanent leadership of the party couldn’t be much farther apart.

Leitch is on the populist path; the centrepiece of her campaign is a requirement that all newcomers be interviewed to verify their “Canadian” values. She rails against “out-of-touch elites,” though some suggest the former cabinet minister and pediatric orthopedic surgeon is one herself.

RELATED: How a new Tory leader can beat Trudeau

“I talk about Canadian values, one of those values being hard work. I think when Canadians work hard they are extremely generous back,” Leitch said recently during a roundtable interview with The Canadian Press.

“That’s different than having an elitist attitude of thinking you know best and you can tell people what to do. That’s not what I share.”

Every day on the campaign trail, she said, she hears about the disconnect between working Canadians and their government. Closing that gap, she believes, requires getting government out of the way with “common sense” policies like spending caps and no carbon taxes.

To anyone who watched last year’s U.S. election campaign, it might all sound a bit familiar.

Harping on elites, cracking down on immigration, promising to stand up for workers — all were hallmarks of how U.S. President Donald Trump seized on the schism between the working class and Washington, riding that wave of alienation all the way to the White House.

O’Toole, meanwhile, isn’t convinced that what happened in the U.S. is transferable to Canada, which is why he’s on a different road.

“A lot of people in our race have been trying to say, ‘How can we tap some of the potential that was disrupted in the U.S.,'” he said in a separate interview.

“I haven’t tried to focus on any of that. I think the experience between Canada and the U.S. is very different — we didn’t have hundreds of thousands of people disaffected, because we had Stephen Harper.”

If Leitch frames her campaign as being about values, O’Toole’s is based on ideas, including a lengthy policy platform that’s intended to take Canada into the future.

He does see the potential for young Canadians to become disaffected, however, which is why his platform targets them with “Generation Kickstart,” a program that would increase the basic personal tax exemption in their first three to five years out of school.

Winning over millennial voters is also a big part of front-runner Kevin O’Leary’s campaign strategy, even though the celebrity investor has yet to deliver them much of a platform. O’Toole, meanwhile, finds himself polling firmly in the middle of the 14-candidate pack.

He chalks it up to O’Leary’s celebrity status, something he expects will fade by the time ballots are being counted May 27.

“You can’t build a strong future for millennials or young people just based on social media,” O’Toole said. “If so, they’d be all secure with Mr. Trudeau, who is very good at social media.”

O’Toole, a year younger than Trudeau, doesn’t pooh-pooh social media’s political power. He just thinks policy is more powerful. “I think Conservatives win when we have ideas that fit with what our grassroots want to do for the future of our country.”

Leitch and O’Toole will spend the next six weeks trying to win over upwards of 100,000 party members. Neither expects to win on the first round of ranked-ballot voting, so they’re also keen to be seen as the best choice for second or third as well.

O’Toole needs support from those backing other Ontario rivals, like Lisa Raitt or Chris Alexander, whose ridings are rich with members. Alexander and O’Toole are two of only a few people to whom former justice minister Peter MacKay has offered to lend his support.

Leitch, whose French is a work in progress, needs help from Quebec. There, those helping Quebec MP Steven Blaney could be wooed; the two share similar positions on immigration.

Leitch has faced criticisms from some fellow Conservatives, including former cabinet colleague Jason Kenney, who say the immigrant-screening idea never came up when they were in government, which suggests it’s just an easy way to get votes.

“Others can speculate on who they think I am, but they are not close personal friends, and last I checked they are not me,” Leitch said. “I am going to continue to talk about this because it is an important issue.”

O’Toole, meanwhile, believes his ideas resonate because he’s been talking about them a long time. His position on marijuana, for example, ran contrary to the official party line for years — he supported decriminalization when the Conservative government had no intention of going in that direction.

The Liberal plan to legalize will be impossible to reverse, he suggested, so best to focus instead on public health issues and proper enforcement. Leitch, for her part, would reinstate the existing pot prohibition.