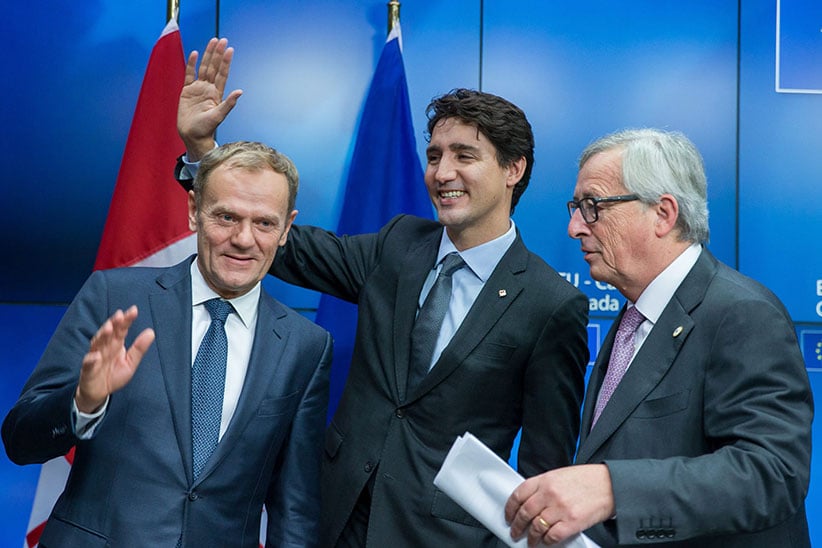 OTTAWA – Lawmakers in Canada and Europe are hailing Wednesday’s approval of the Canada-EU free trade deal by the European Parliament as a win for the values of openness in the face of anti-trade movements, including the Donald Trump administration.

The legislature in Strasbourg, France, approved the Comprehensive Economic and Trade Agreement by a margin of 408-254, with 33 abstentions. The vote clears a major hurdle for the deal that saw its first round of bargaining almost eight years ago and has had to overcome mounting anti-trade populism in Europe.

Canada’s Parliament is also expected to ratify the deal in the coming months, which means 90 per cent of it would come into force under provisional application — a key procedural step that allows the deal to take effect without the ratification of the European Union’s 28 member countries and numerous regional governments.

Prime Minister Justin Trudeau was en route to France to deliver his own pro-trade message in an address Thursday to the European Parliament, a first for a Canadian leader, and to speak to top business leaders a day later in Germany.

On his way into a caucus meeting earlier Wednesday, Trudeau sang the praises of the deal as evidence of the merits of globalization.

“I think it’s an illustration that when you put forward a progressive trade deal that takes into account the responsibility of governments to create good middle-class jobs, create inclusive growth — not just for a few, but for everyone — (and) that focuses on the middle class, we can move forward on globalization.”

International Trade Minister Francois-Philippe Champagne, who was already in Strasbourg ahead of the vote, called it “the right deal at the right time.”

“Good for workers, consumers and a new standard for trade.”

EU Trade Commissioner Cecilia Malmstrom took direct aim at anti-globalization forces in remarks to Parliament, in what appeared to be a thinly veiled rebuttal to Trump’s protectionist and anti-immigration policies.

“With Canada we share the democratic values of tolerance and openness,” Malmstrom said. “We co-operate in tackling common challenges such as migration, sustainable development, climate change and terrorism.”

CETA, as well as its companion strategic partnership agreement, would strengthen not only Canada-EU economic relations but our “geopolitical alliance … making that partnership deeper and more powerful, reaffirming our fundamental values, political principles, and using them to shape globalization.”

The deal will help each side “serve its citizens” in the 21st century, Malmstrom added.

Former prime minister Stephen Harper, whose government opened the long negotiations that led to the agreement, welcomed the European vote with a tweet: “Pleased to finally see the Europeans ratify our CETA free-trade deal,” he wrote. “Good news for Canada and the Canadian economy.”

Ex-Quebec premier Jean Charest, one of the most ardent promoters of the free-trade deal from the outset, said Trump’s protectionist tendencies and the United Kingdom’s decision to leave the European Union made the signature of the agreement all that more important.

“It will allow us to further diversify our trade toward one of the most important markets, in terms of consumers,” he told The Canadian Press.

Charest, who now works for the McCarthy Tetrault law firm, didn’t imagine the process would take so long.

“Honestly, I expected it would be settled within four years,” he said. “In these negotiations, time is the worst enemy. Circumstances change and the file can slip between the cracks. I’m happy because there aren’t many 10-year projects.”

The Conference Board of Canada called the agreement good for both sides, since economic history demonstrates that greater free movement of goods, services and people is a catalyst for economic growth.

“Amid worries of U.S. protectionism, the opportunities CETA creates provide a shining example that international trade is not a zero-sum game,” said Craig Alexander, the board’s chief economist.

Trudeau will bolster the merits of “the progressive trade agenda” when he speaks to EU lawmakers on Thursday, Champagne said in an interview.

“Canada is in a unique position to show that trade is good for people and I think we’re going to make that case across the world.”

Politicians need to do more to sell the merits of free trade to an increasingly skeptical public, but the deal will also sell itself once it is fully ratified, he added.

“When people see in practice what it means for them, I would think that over time people will see the benefits.”

Critics of the deal “may be philosophically driven, just being against any trade,” Champagne noted.

Case in point: Maude Barlow, chair of the Council of Canadians and an ardent free-trade critic, said groups such as hers would continue to oppose the deal.

“European opposition to CETA is strong and 38 national and regional parliaments still have to ratify the deal,” Barlow said in a statement. “Referendums, legal challenges, elections and other obstacles still stand in the way of implementation.”

“The mobilization against CETA has been one of the strongest European democracy movements ever,” the group’s trade policy campaigner, Lora Verheecke, said in a statement.

“A glimmer of hope now comes from the many national and regional parliaments across all of the EU that still have to ratify CETA. Each one of them can bring it to a halt.”

Wednesday’s vote should close the drawn-out approval process across the 28 member states, where some governments and legislatures had tried to modify or scupper the deal. The Netherlands could still block it if it demands an advisory national referendum on the deal.

CETA is designed to unite the markets of 35 million Canadians with 500 million Europeans.

The vote comes as populist parties in Europe and Trump in the U.S. have been looking increasingly inwards, thwarting a trade deal with Pacific countries and floating the idea of tariffs on imports.

David Martin, a European parliamentarian for Scotland, called CETA a “watershed moment” that has had to overcome many obstacles.

“Together with our Canadian allies we are standing firm against growing global protectionism, championing open trade in a time when others are losing faith,” he said in a statement.