Everything you need to know about the Iowa vote 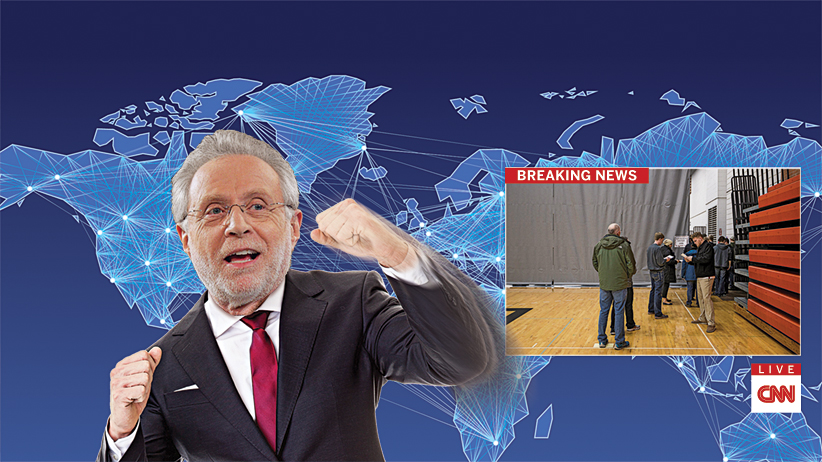 “Breaking news!” Wolf Blitzer was saying as people in Iowa prepared to cast the first ballots of the 2016 U.S. presidential election. “Crowds are gathering!” Even by CNN’s famously loose standard of “breaking news,” that seemed like a stretch. This just in: VOTERS VOTE ON VOTING DAY!

Wolf turned out to be the voice of restraint. “Check out this line!” reporter Brian Todd over-enthused from a Republican gathering in the city of Ankeny. There were five people in the line. He found a longer line and marvelled at it. Then he returned to the first line. “This is the critical line!” Brian said. “You’re seeing this in real time!”

Over in Coralville, another reporter broke in with a scoop. “Watch this line here! This line didn’t exist 30 minutes ago!” An hour later, CNN took us back to Coralville and the line was… gone. VANISHED, I TELL YOU! Good thing Mulder and Scully are back together.

Cue one of the hallmarks of American political journalism: the reading of the candidates’ body language. We were told Bernie Sanders seemed “upbeat” earlier in the day. A correspondent who ran into Hillary Clinton said “she seemed relaxed and perhaps confident.” As though a presidential candidate would ever spot a reporter and respond by scowling and punching a baby. (Well, maybe Nixon.)

Back in Ankeny, our man Brian was losing it. “They keep coming and coming,” he said. “Look at this line! It’s going out the door! Look at how dynamic this crowd is!” I looked: People were standing quietly. One dude waved. “So many people,” Brian concluded gravely, as though he’d just watched the Hindenburg smash into the Challenger and land on Pearl Harbor.

Wolf walked around the CNN set shouting “Breaking news” and, at one point, “OMG.” John King used his finger to draw circles on a big screen known as the Magic Wall, which is definitely something a serious person should be doing on TV. Brian returned with big news from Ankeny. The people who used to be standing in a line out there were now standing in here. “It’s standing room only,” he said, then helpfully added: “People are standing.” Still confused? Brian has you covered. “Look at the people standing back there!”

Ballots were cast and counted. Donald Trump was running a weak second to Ted Cruz. Before the vote, Cruz had declared: “This is in God’s hands”—so at least Trump knows who to blame. It’ll be fun to watch him try to take his revenge: “God, a pretty low-energy deity. Kind of sad. Personally, I wouldn’t hire Him.” Certainly a broadside against the Almighty would have been more authentic than the concession speech Trump actually delivered. “We’re just so happy with how everything worked out,” he said, lying. Come on: Trump as gracious loser? It was perhaps the first time in his life that he failed to sell something.

Trump began the evening as the favourite. A few hours later, he seemed destined to fade away like the ghost of a ballplayer into a field of Iowa corn.

Meanwhile, Marco Rubio was excited to finish third. You could tell he was excited because he accidentally delivered the speech of someone who finished first. “So this is the moment they said would never happen!” he hollered, eyes moist. What, the moment when a career politician attracted fewer votes than a reality show hairpiece and a charisma-deprived Canadian? It’s true— no one thought that would happen.

In victory, Ted Cruz was dull. Ted Cruz is dull. He is a product instruction booklet come to life. He speaks in. Halting sentence fragments. And at each pause. Hopes ignite that maybe. Maybe. He’s done talking. But he never is. Even when Cruz’s message is bright, his delivery ensures the mood remains ominous. Imagine Walkin’ on Sunshine as sung by Darth Vader. It can be hard to take.

Want proof? Cruz was praising his supporters. “We are inspired by each and every one of you,” he said, then continued: “I leap out of bed every morning…“—at which point CNN abruptly cut away to Hillary Clinton’s speech. If Hillary hadn’t been available, a test pattern would have sufficed.

Clinton, by the way, left Iowa deadlocked with Sanders, a curmudgeonly socialist whose Secret Service code name would pretty much have to be Andy Rooney, right? Bernie flew on to New Hampshire, arriving in the pre-dawn hours. Awaiting him—don’t tell Brian; Brian needs his sleep—lines and lines of standing people.