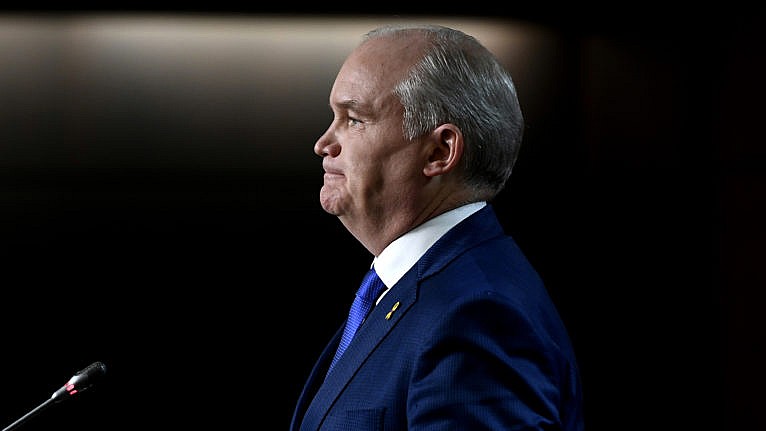 Exit O’Toole, stage right: In Maclean’s, Paul Wells observes that Erin O’Toole, whose party turfed him on Wednesday, was perhaps too blatant. “Running against carbon taxes, then proposing carbon taxes while pretending you aren’t, is not a confidence-building path.”

What will come next? Likely some kind of accommodation with the growing Trumpist wing of the party.

In 2015 a high-ranking Harper Conservative told me, unsurprisingly, that Canadian Conservatives had productive and elaborate relationships with conservative parties in the U.K., Australia and New Zealand. They’d exchange low-level and sometimes more senior staff. They’d copy one another’s ads. They’d exchange information technology. But Canadian Conservatives, this person told me, had less and less to do with U.S. Republicans, because that party was turning “strange” and had little, in doctrine or technique, that could be useful in the Canadian context.

That firewall has collapsed. The people who donate to the Conservative Party of Canada and volunteer for it watch Fox News and read Facebook. Donald Trump’s endorsement of a so-called “truckers’ convoy” inspired by the Capital Hill riot of Jan. 6, 2020 was a genuinely exciting moment for a lot of people in today’s Conservative movement. Including, I’m entirely sure, some part of the party’s national caucus.

Powder keg party: In the Globe, veteran columnist Lawrence Martin suggests the Tories may end up being led by Pierre Poilievre.

The hard right’s stock and trade is visceral anger. If the O’Toole ouster cements its control, as opposed to the centre right, it will have the effect of further polarizing the country, debasing the dialogue, pitting region against region. On the leadership question, Pierre Poilievre is one to watch. He is a gifted politician, exceedingly articulate, more capable than anyone in Ottawa of marshalling arguments with precision and power. He is also underhanded and unscrupulous, a polarizer who will go as low as a crocodile if it suits his needs.

Hideously flawed: Chris Selley has a funny column in the Post predicting the leadership race to come will be a mess.

It was the party’s “true blue” faction that led the successful calls for O’Toole’s ouster, but that faction doesn’t get to install the next leader. The winner of the next race will once again be the person who can best keep both Tory-minded and Reform-minded voters halfway interested as their first choices are eliminated. (Twelve per cent of first-ballot voters in the 2020 contest declined to cast a third ballot.) So the incentive to mislead those voters remains — indeed, it’s probably stronger, because the chances of the Liberals defeating themselves between now and the next election are greater than last time around.

Race is on: CP has a rundown of potential replacements for O’Toole and a good roundup of the day’s CPC leadership events.

After ejecting O’Toole at a caucus meeting Wednesday morning, O’Toole released a gracious concession video. MPs reconvened Wednesday evening to elect an interim leader, Candace Bergen, CTV reports. Bergen, who was deputy leader under O’Toole, represents Portage—Lisgar, in Manitoba. She is the third female leader of the party, following in the footsteps of Kim Campbell and Rona Ambrose. She reportedly bested New Brunswick MP John Williamson for the job as interim leader. She recently defended anti-mandate protesters and has previously been criticized for wearing a MAGA hat.

A video of her defending the protesters and attacking Trudeau recently went viral internationally.

Cheese: After the caucus meeting, several Saskatchewan MPs popped down to take a photo with the protesters who are besieging the city, which Ottawa Mayor Jim Watson found disappointing.

Army time? Earlier, Ottawa Police Chief Peter Sloly told city councillors the security situation is dire enough that it may be necessary to call in the military, the Globe reports.

Peter Sloly said the Ottawa police force is considering options ranging from a negotiated resolution to enforcement. But he warned that any option carries risks. Chief Sloly said there are only two occasions that he is aware of in the past 100 years – the Oka and FLQ crises – when the military was mixed in with police. “It is not a decision to be taken lightly,” he said. “I’ll say it again as I said before, every option is being looked at. None of the options create a beautiful, elegant, simple safe solution. They all come with massive risks.” Chief Sloly also said his service is aware of a significant element from the United States that has been involved in the funding, organization and demonstrating taking place on Parliament Hill and surrounding streets. He also said more protesters are planning to come to the city by the weekend.

The blockade, now in its fifth day, is a protest against COVID-19 health measures. The last several trucks blocking Highway 4 had moved as of 2:30 p.m. and traffic was able to proceed through the open lanes, though a long line of vehicles remained pointed toward the port of entry. Chad Williamson, a Calgary lawyer retained by protesters, said the demonstrators spoke with Mounties and agreed to open two blocked lanes. A livestream video posted to Facebook by one of the protesters shows participants voting on opening the lanes. In the video, a speaker says they are opening the lanes with the understanding the province has agreed to end (some restrictions). He says if this does not happen, protesters will resume the blockade. In a statement, United Conservative Party caucus chair Nathan Neudorf said no such agreement has been authorized.

Headed to Quebec: In Quebec City, police have begun to block streets in preparation for a protest there, CBC reports.

And Toronto: Police in Toronto are preparing for a protest there, CTV reports.

Nofundme: The online fundraising page for the protesters has been shut down, CBC reports, but GoFundMe is not saying what will happen to the $10 million raised so far, much of what appears to come from outside Canada.