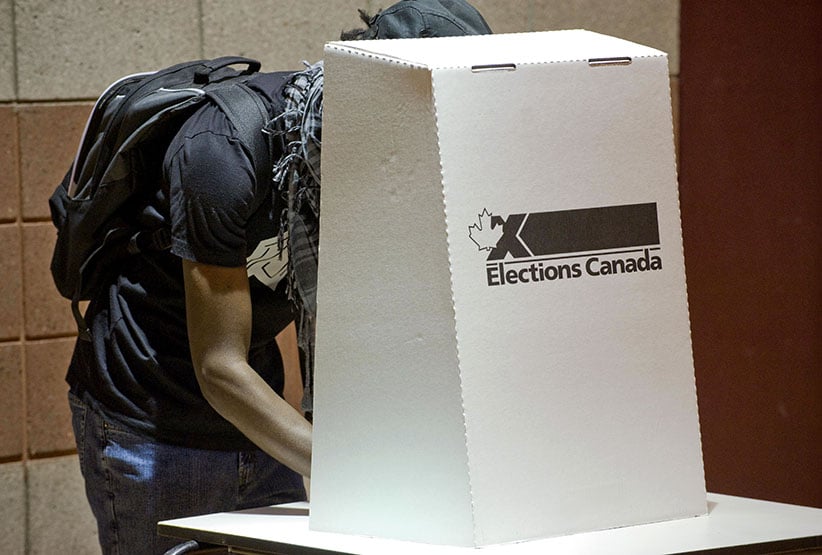 OTTAWA — If Justin Trudeau gets his way on electoral reform, will the Liberals “steal” every federal election in perpetuity?

As hearings on a new voting regime resume next Monday, the Conservatives contend that’s what would be in store if Canada adopts a system of ranked ballots, which the prime minister has in the past touted as his preference for replacing the current first-past-the-post (FPTP) voting system.

Pollsters, pundits and proponents of proportional representation are only slightly less apocalyptic, predicting that a ranked ballot system — also known as preferential ballot or alternative vote (AV) — would certainly give the centrist Liberals an unfair advantage.

Hogwash, say political scientists who specialize in the study of voting systems.

“You can’t say anything would automatically occur once a change in the electoral system happens … The moment you change the rules of the game, the calculations of both the parties and the voters themselves will change.”

Under AV, voters mark their first, second and subsequent choices. If no candidate wins more than 50 per cent of the vote, the contender with the fewest votes is dropped from the ballot and his or her supporters’ second choices are counted. That continues until one candidate emerges with a majority.

Had that system been in place in last fall’s election, polls have suggested Trudeau’s Liberals — who won 55 per cent of the seats in the House of Commons with just 39 per cent of the popular vote — would have won an even bigger “false majority” since they were the most popular second choice among supporters of other parties.

Trouble is, those analyses superimpose second choice preferences onto voting behaviour that was driven by FPTP — which compelled plenty of New Democrat and Green supporters last October to back the Liberals to defeat the Conservatives, rather than risk “wasting” their votes on the smaller parties.

If those strategic voters had been able to support their first choices, marking the Liberals second as surety against Conservative victory, the result could have been much different, experts say. For one thing, NDP support likely wouldn’t have utterly collapsed.

“My best guess, without doing a close riding-by-riding assessment, is that a preferential ballot would likely have produced a hung Parliament rather than a Liberal majority,” says University of British Columbia professor emeritus Ken Carty.

But it’s not just voter behaviour that would have changed. The parties themselves would have been forced to broaden their appeal if they’d been competing for second — and not just first — choice votes.

If AV did wind up benefiting primarily the Liberals, Pilon says the Conservatives would have only themselves to blame.

“The Conservatives have pushed themselves into a corner that’s just too extreme for Canadians,” he says.

So, which party would benefit most under ranked balloting? Hard to say.

It would likely be an advantage for smaller parties that tend to get squeezed by strategic voting under FPTP, says Arend Lijphart, professor emeritus at the University of California San Diego and widely considered the world’s leading expert on voting systems.

Like other experts interviewed by The Canadian Press, Lijphart is a fan of proportional representation, a voting system in which a party’s share of seats in the legislature reflects its share of the popular vote. But, while ranked balloting would not produce a proportional distribution of seats, he says it would still be better than FPTP.

“I think you get a more accurate choice with ranked choice balloting and you’re really also making it easier and more straight-forward for the voter because the voter doesn’t have to calculate how is my vote going to work. They can vote the way they feel.”

The beneficiary of such voter liberation would likely vary from region to region of the country, says Pilon. In some places, like the Greater Toronto Area where voters tend to switch between the Liberals and Conservatives, the two main parties would benefit. In places like B.C., where voters are more likely to switch between NDP and Conservative, those two parties would benefit.

In the handful of countries that use ranked ballots, like Australia, Pilon says the system was introduced deliberately to allow two main parties to work together to shut out other parties — and it’s largely worked out that way. But that hasn’t been the experience in Canada, where the system was used provincially years ago.

Back in the early 1950s, when B.C. was governed by a Liberal-Conservative coalition, Tanguay says those two parties brought in ranked ballots to “keep the socialist hordes out.”

But those assumptions were “shattered” when Social Credit “came out of nowhere” to score the most second-choice votes and win the election.

And that, says Tanguay, underscores the unpredictability of what could happen if ranked balloting were adopted nationally.