Canada's troubadour on Don Cherry, Beluga grads and 'light' and 'dark' in the digital age 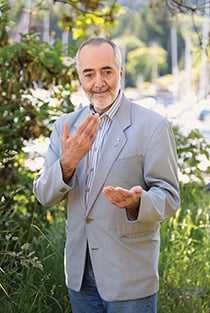 Millions know Raffi Cavoukian by his first name. Just its mention is enough to move people to song—perhaps the chorus of Baby Beluga, a track first recorded more than 30 years ago. He now goes by @Raffi_RC on Twitter, where he is both an enthusiastic participant and an ever-vigilant guardian. Just back on stage after a 10-year hiatus, he’s also the author of Lightweb, Darkweb, a new book that calls for the reform of social media.

Q: You are very active on Twitter at all hours. You tweet about Rob Ford and NHL hockey and robocalls and kale. What does that presence—and your 13,000 followers—mean to you?

A: It’s an interesting opportunity to have a voice in the public discourse on a daily basis.

Q: Earlier this year, you took a Twitter vacation. What precipitated your media fast?

A: That was just for a weekend. I thought, “Let’s put this on hold and see what it feels like,” because I had been on Twitter for two years, engaging in it daily. It was wonderful to see just the subtle difference in my presence in the room that I was in without my mind and my thoughts almost impulsively going to the outside world—as happens when you’re a frequent tweeter. So it gave me good perspective, helped me to understand the attraction of constant engagement, helped me to understand the basis of dependence—social media dependence/addiction—especially for young users because, clearly, this medium that we call social media takes some discipline so that you can use it without it using you.

Q: I first learned of your book on Twitter and then I read it on an iPad Mini. When it comes to balancing what you consider the positive and negative influences of modern technology, how did I do?

A: That’s a good question. I think you engaged in the lightweb. The lightweb is all that we love about social media and the Internet.

Q: Now to the darkweb. You describe a social media crisis in which children of all ages are addicted to smartphones and the compulsion to share experiences rather than live them. Your book advocates for the reform of social media and a re-thinking of our relationship with digital culture. Where do we begin?

A: There are some pressing questions that have been overlooked. If you read the digital utopian books that are out today, or those authors who tend to be cyberutopians—the latest one is The New Digital Age by Eric Schmidt—generally speaking, you’ll find child development and ecology are not on their radar. I think that’s a huge oversight. My book calls on society to take seriously the impact of what I call “shiny tech” on early childhood, on child development, on societal intelligence. We now know that the formative period of life largely shapes a lifetime of behavioural outcomes. We don’t know what’s going to happen with everybody growing up with these devices all over the place and, often indiscriminately, in their hands.

Q: The book is dedicated to Amanda Todd. In the days after the B.C. teen’s suicide, you co-wrote, with former B.C. Crown prosecutor Sandy Garossino, a letter to Sheryl Sandberg and Facebook. What were you hoping the letter would achieve?

A: Certainly, we hoped for some response. We didn’t get any. The letter calls for systemic safety changes by social media providers so that the onus for safety is not on the user, which we think is unreasonable. While we of course underline the importance of parental responsibility and parents making sure their kids understand how to use social media safely with privacy settings and so on, most parents aren’t really able to keep up with the changes regarding privacy. They can’t supervise their kids 24/7. Platforms should be safe by design.

Q: You advocate through the Red Hood project that the onus is on social media companies.

A: Why don’t they say, “As an important step in protecting young-user privacy, we will hire 100,000 new human moderators immediately, and we will increase those numbers until we reach a million.” I mean, it’s a $60-billion company. We’ve seen nothing of the sort from them. It’s disappointing, to say the least.

Q: What do you want from policy-makers?

A: I’m not looking to burden our already-burdened police forces with new criminality implications from online behaviour. But behaviours in the online world have real-world impacts. By engaging safety by design, Facebook and other social media platforms would hopefully save society—and our tax dollars—from having to address these terrible gaps in security and privacy for young users. Society shouldn’t have to be burdened by the negligence of social media platforms.

Q: Parents look to you for advice. What is the most important thing they can do?

A: Parents can co-sign the open letter to Sheryl Sandberg, they can get on the Red Hood project website and become part of the movement that’s demanding safety by design. They can also come to learn the social media landscape, learn the language the kids are using. For the first time, we’ve got kids living in a real world and virtual world, as well. Parents need to restrict the amount of time their kids spend onscreen and online. At night, all shiny tech devices need to be taken out of the kids’ bedrooms. Kids should not be going to sleep with their devices. Setting firm time limits for screening is really important.

Q: You say very young children should not have these devices at all.

A: There is no new model of child development that supports the intrusion by shiny tech into early-childhood development. I challenge any of these billionaire cyberutopians to address that question. “Formative” is the new f-word I want every family to understand. You hear parents say they don’t want their kids falling behind, so they think it’s a good thing to start them early on this technology. That doesn’t stand up to logic. The thing about shiny tech is that it takes no skill to operate it; you can learn how to handle a smartphone in 10 minutes. Emotional intelligence is the key to these formative years. “Tech can wait” is my message to parents.

Q: You follow politics closely. Last week, you mused publicly what it would be like to have Opposition Leader Tom Mulcair interrogate Toronto Mayor Rob Ford. After Jack Layton’s death, you turned his letter into a song. You’re a vocal advocate for a range of issues. Have you ever imagined a life in politics?

A: No, I’m not cut out for that. My role is the role of the troubadour who asks questions.

Q: You’re back on stage after almost a decade away. One person likened it to the return of the Beatles, and someone else described your performance having Springsteen’s energy, Sinatra’s rapport and a late-’80s Guns ’N’ Roses ass-kicking.

A: Where’s Pete Seeger in that description?

Q: You can’t mention Seeger without me asking you if you are really thinking of recording an album of his folk songs.

A: It’s in the back of my mind. I went to visit him a year ago. I think the man deserves all the tributes we can give him. He’s still singing, and he’s a presence. If I can have half the impact that he had . . . he’s amazing.

Q: Why did you leave the stage? And what brought you back?

A: I left because I’d done everything and more that I ever dreamed of doing. I needed a break. I also wanted to take some time to develop the child-honouring philosophy. Ten years went by and I said, “It might be fun to be back on stage and feel that energy of the fans and the songs.” We have all these “Beluga grads”—there are between 20 and 50 million Beluga grads between the ages of 18 and 40 in the United States and Canada—and I thought, “It would be fun to hear their voices, too.”

Q: You’ve appealed to those Beluga grads, now that they’re raising their own kids.

A: I think all of us, as citizens in a democracy, have a duty to be engaged in civic issues. We have a duty to vote, to know what the issues are in our communities and in our nation. We also have a duty to know what our actions—both individually and collectively—are doing to our planet, because this natural world is what feeds us daily. It’s interesting that the Internet revolution has come along and almost hijacked the ecological revolution that the world actually needs. So I see the situation of the lightweb/darkweb as an opportunity. By engaging the best of the lightweb, we might actually be able to connect with one another toward our highest inclinations, and we can only do that by curbing the worst aspects of the darkweb. That brings us full circle in the conversation.

Q: It does. And yet I want to ask you about hockey. On the weekend, you were complaining on Twitter about NHL officials.

A: NHL officiating just throws the rule book away. It’s crazy. What other high-level professional sport does that? Can you think of one? I can’t. All these people say, “Oh, it’ll stop the flow of the game if you call every infraction.” Well, you’re supposed to, there’s a rule book, you know? What does that say to kids? So you watch playoff hockey, you see flagrant infractions, all the cross-checking in front of the net, the slashing, and they call maybe, what, half of it? That’s a problem. But the NHL has many problems in building the game up to a better calibre of decency and sportsmanship.

Q: What about Don Cherry?

A: Cherry’s bullying antics shouldn’t be on our public broadcaster. They don’t set a good role model for kids.