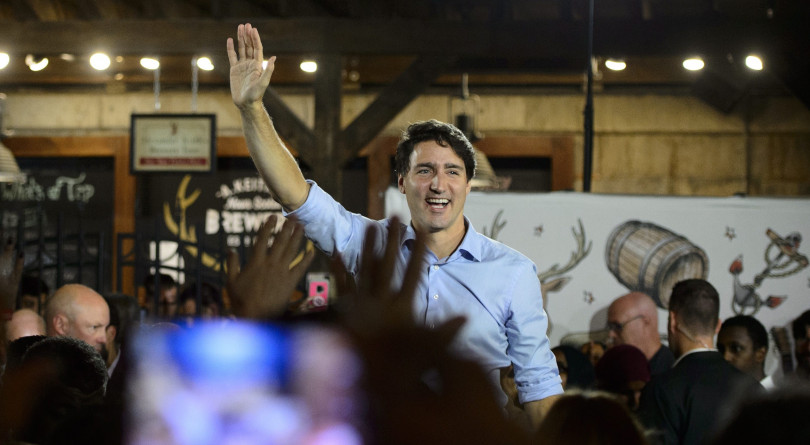 Justin Trudeau remains prime minister but the Liberals will need the support of at least one party to govern a country that emerged bitterly divided from a bruising 40-day election campaign.

With results still pouring in late Monday, the Liberals had 157 seats—13 short of the 170 needed for a majority in the 338-seat House of Commons.

A resurgent Bloc Quebecois scooped up 32 seats, dashing Liberal hopes of making gains in Quebec that could have ensured a second consecutive majority mandate.

LIVE: Watch as the federal 2019 election results pour in

Despite a strong campaign by NDP Leader Jagmeet Singh, his party was leading or elected in just 23 seats and nearly wiped out in Quebec, the province that only eight years ago delivered an orange wave that pushed the NDP into official Opposition status for the first—and so far, only—time.

Nevertheless, Monday’s result leaves the NDP potentially in the driver’s seat, holding the balance of power.

Trudeau, whose Liberals entered the campaign with 177 seats, will need the support of either the NDP or the Bloc to command the confidence of the House of Commons, the first test of which will come within weeks on a throne speech to open a new session of Parliament.

And that could well exacerbate divisions that worsened over the course of the campaign and were apparent in the Liberals’ being shut out entirely in Alberta and Saskatchewan. The two oil-producing provinces went solid blue, delivering every seat to the Conservatives.

Indeed, the Conservatives were slightly ahead in the popular vote overall. But with so much of their vote concentrated in the two western provinces, the party fell short of the Liberals’ tally, taking just 121 ridings.

Singh has signalled the NDP will fight plans to expand the Trans Mountain Pipeline to carry Alberta oil sands crude to the British Columbia coast, en route to overseas markets. Trudeau’s government purchased the pipeline for $4.5 billion to ensure the expansion project would proceed, a decision that cost the Liberals support among progressive voters.

The Liberals owed their lead over the Tories largely to Ontario. The country’s largest province delivered 79 seats to the Liberals, compared to 36 for the Conservatives and just six for the NDP.

In Quebec, the Liberals were down to 35 seats, just ahead of the Bloc Quebecois with 32. The Conservatives were leading in 10 and NDP in one.

WATCH: The most relaxing election results ever

The Liberals also dominated in Atlantic Canada. Early results had the Liberals leading in 24 of the region’s 32 ridings, the Conservatives in six, the NDP in one and, in something of a surprise, the Greens in one: Fredericton.

However, Diane Lebouthillier in Quebec’s Gaspesie-Les-Iles-de-la-Madeleine, where polls closed earlier than in the rest of the province, was in a tight race against the Bloc Quebecois’s Guy Bernatchez. Veteran minister Ralph Goodale went down in Regina, as did Amarjeet Sohi in Edmonton.

The Green party, which had hoped for a big breakthrough in this election, had three seats, up just one.

Maxime Bernier, leader of the fledgling People’s Party of Canada, lost his own Quebec seat in Beauce.

Neither Trudeau nor Scheer seemed able to generate much enthusiasm throughout the campaign, which frequently devolved into mudslinging and misrepresentations of one another’s policies and records.

Trudeau, who had barely recovered from months of controversy over the SNC-Lavalin affair last winter and spring, was embarrassed during the opening week of the campaign when it was revealed that he had at least three times in the past dressed up in black- or brownface. The revelation undercut his image as a champion of diversity and inclusion.

He was also plagued with unsubstantiated rumours and fake reports, spread on social media, about his conduct as a teacher at a Vancouver private school.

Scheer was dogged throughout the campaign by questions about his personal beliefs about abortion and same-sex marriage and repeatedly insisted that he would not reopen debate on either issue should he become prime minister. However, doubt remained whether he would allow Conservative backbenchers to initiate legislation to restrict access to abortions.

Conservative hopes in Quebec took a beating after Scheer put in what was widely considered a bad performance in the first French-language leaders’ debate. And in the dying days of the campaign, he was hit with reports that his party had hired an outside consulting firm to conduct a “seek and destroy” campaign against Bernier, Scheer’s one-time leadership rival.