Anne Kingston: As preview, it delivered in polling gaffes, federal strategies and emphasis on the environment 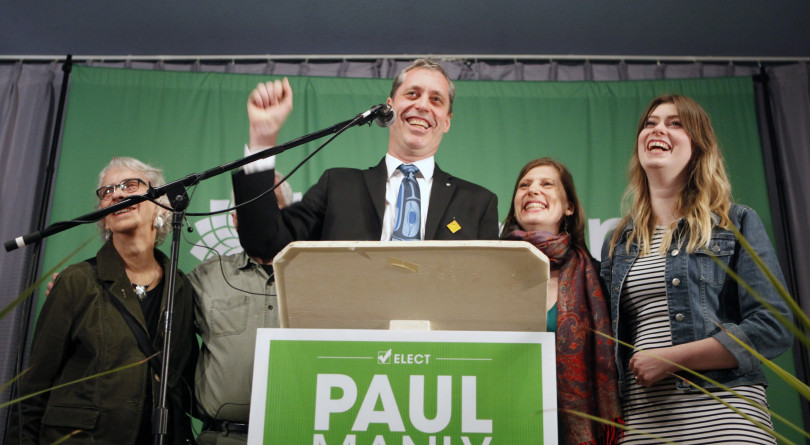 Manly celebrates with his family after results come in for the Nanaimo-Ladysmith by-election in Nanaimo, B.C., on Monday, May 6, 2019. (Chad Hipolito/CP)

The most astute words I heard about the Nanaimo-Ladysmith federal by-election days before a vote that elected Green Party candidate Paul Manly on Monday night to a seat held by the NDP didn’t come from a political operative. They were delivered by a local hotel manager who declared himself non-partisan. Like anyone you spoke to in the riding, no matter what political stripe, he found the by-election a waste of time and money, given that everyone is going to have to gear up to vote again in October. But he knew its importance: “It’s really a message election,” he said, “It’s a chance to tell Ottawa how we feel.”

By that metric, Manly’s decisive victory — 37.1 per cent of the vote with 96 per cent of polls reported at time of writing — signals a sea-change since the 2015 election, as well as frustration with the current political status quo. In 2015, Manly, son of former federal NDP MP Jim Manly, placed fourth, with 19.8 percent of the vote. The seat was won by the NDP’s Sheila Malcolmson with 33.2 per cent, followed by the Liberals (23.5 per cent), and Conservatives (23.4 per cent).

This time out, Manly nearly doubled his 2015 numbers. Conservative John Hirst placed second with 25.1 per cent, followed by New Democrat Bob Chamberlin (22.9 per cent), and Liberal Michelle Corfield (11.1  per cent). Trailing behind were parties that represented differing points on the conservative spectrum:  Jennifer Clarke of the People’s Party of Canada lead by Maxime Bernier (3 per cent), Jakob Letkemann of the National Citizens Alliance (0.2 per cent), and Brian Marlatt of the centre-right Progressive Canadian Party (0.6 per cent).

The election of Manly, a filmmaker and communications specialist, doubles the federal Green caucus from one to two, and brings to an end Green Party leader’s Elizabeth May solitary sojourn in the House of Commons since 2011. “We now have gender parity,” Manly joked on Monday night before a cheering crowd at Cavallotti Lodge, a unprepossessing cinder-block reception hall on the outskirts of Nanaimo. The setting itself was less partisan power nexus than wedding reception thrown by frugal, eco-conscious relative. Flowers and grasses lined the entrance, fairy lights strung overhead. Food — vegetable platters alongside cheese and crackers — was laid out. Only the TV cameras, DJ and screens on mute broadcasting electoral results suggested something else was afoot.

The bump in federal Green representation, while seemingly minute, echoes larger recent gains by the provincial Green parties, most notably last month’s historic breakthrough in P.E.I. where the Greens now comprise the official opposition to a Conservative minority government. Vancouver Island, a traditional NDP stronghold, is strategically vital to the Greens; May represents the riding of Saanich–Gulf Islands, viewed as a toe-hold as the party looks to grow federally. Toppling the strong NDP machine in Nanaimo is significant. One Green organizer boasted about the effectiveness of the party’s “Get out the Vote” program, noting the failure to do so in P.E.I. likely cost them the majority that was predicted.

When Malcolmson vacated the seat in January 2019 to run for provincial politics (a race she won), she announced just before the nine-month cut-off before a federal election — after which vacancies in the House of Commons don’t need to be filled. Malcolmson argued that the seat should remain vacant until the general election to no avail. Elections Canada and the PMO disagreed. Two other ridings, both Liberal strong-holds made vacant in early 2019, remain so: Saint-Léonard–Saint-Michel (Quebec) and Kings–Hants (Nova Scotia), Scott Brison’s former seat. There was also griping that by-election could  deplete war chests of less prosperous parties: the Liberals only spent $22,000 in Nanaimo-Ladysmith in 2015, while Manly raised $145,000, and the Conservatives and the NDP spent over $130,000 each.

The riding is politically engaged: the 75 per cent turnout in the 2015  federal election exceeded the national average of 68.5 per cent. There was standing room only at last week’s all-candidates debate where Manly delivered a message that clearly resonated: “If you elect me, we are going to fire up this country and we are going to get some things done because they are going to notice that people in Nanaimo-Ladysmith care about climate change, you care about the next generation, you care about the future. It’s important what we do here.”

Issues pertaining to the intersection of Man and Nature are writ large here, a place of immense natural beauty where highways lined with ValueLodges, A&Ws, strip malls and car dealerships slice through emerald forests.  The earth’s resources have fuelled the local economy since the 19th century — first coal mining, then forestry. Lumber and fishing remain major industries, augmented by government services and tourism. But concerns are mounting.  As Green supporters awaited poll results on Monday night, talk focused on the news of a chilling UN global assessment report released earlier that day that concluded more than 1 million species were under risk of extinction, putting human society under urgent threat.

A week before Monday’s election, city council passed a motion officially declaring a climate emergency. (Four supporting motions included refreshing an unused emissions reduction reserve incorporating new targets in the community sustainability action plan, requesting 20,000 hours of public transit expansion, and advocating that the provincial government reinstate community emissions reporting.)  Housing affordability is another major worry, given the influx of Vancouver area residents after cashing in on their real-estate lottery. A starter home can run half a million dollars. Gas here costs $1.54 a litre; two retirees report only putting $40 worth in their car because that was all they could afford. Crime is rising, as is drug addiction.

Given the riding’s location, the post SNC-Lavalin timing, and shifts in the political climate it’s not surprising the by-election assumed a preternatural import. It was framed as “a test of political forces.” As Manly wrote in The Straight, it was “voters’ last chance to set the stage for change in the fall” and “to give all the federal parties a preview of the kind of leadership and future they want.”

The by-election also offered a preview to voters — as yet one more cautionary tale of  how trusting polls can be misplaced.  An Advanced Symbolics poll championed by the NDP projected  the NDP and Conservative each with  29 per cent of the vote, and Manly at 26 per cent. A Green Party-commissioned Oraclepoll poll was closer but not on the mark in terms of ranking: it found Manly had support of 36 per cent of decided voters, followed by the NDP at 24 per cent, Liberals at 19 and Conservatives at 17 per cent.

The Nanaimo-Ladysmith race also provided a glimpse into potential federal campaign strategies. In his victory speech, Manly highlighted the Greens running a positive campaign that reframed the conversation around the climate crisis. Calls for governments to take responsibility and to stop the subsidizing fossil fuels were themes he repeated on Monday night. “We’ve moved beyond the cart and and buggy, it’s time to move beyond the combustible engine,” Manly said, pointing to local Harbour Air electrifying its sea plane fleet without government subsidy. He highlighted other platforms in the “Green Vision” policy book less discussed: support for affordable housing, better health care and basic dental care. The loudest cheer in the night went to his call for “good clean jobs in a clean energy economy.”

Liberal candidate Michelle Corfield, a First Nations leader who led the Save the Nanaimo Harbour campaign as chair of the Nanaimo Port Authority, was firmly positioned as #TeamTrudeau. Her campaign’s focus came from the Liberal playbook: “jobs,” specifically “high-paying jobs for new graduates,” investment in infrastructure and transportation. She praised the party’s ocean protection plan, a national housing strategy, and work done toward Pharmacare.  No one ever mentioned SNC-Lavalin when she was door-knocking, Corfield told me. What she did hear, she says, was people enthusing about the Liberal’s Canada Child Tax Benefit: “Eighteen thousand children are benefitting right here in Nanaimo-Ladysmith area.”

All five federal leaders made appearances on the hustings. Singh visited three times, most recently last week. Scheer visited once, as did Bernier. Trudeau appeared the day after the by-election date was announced in March; he worked the phones for the campaign in late April. No less than eight MPs, including Catherine McKenna and Marc Garneau, were deployed to the riding. May was active on the ground in the campaign’s final days, appearing at Comicon Nanaimo on May 4 costumed as Star Wars’ Princess Leia next to Manly’s Luke Skywalker, participating in street waves of Green sign and door-knocking. She even took to the dance floor during Blues Jam at the Queen’s Pub in downtown Nanaimo on Sunday afternoon, where Manly played bass and sang an impressive version of “Let the Good Times Roll.”

The Green leader wasn’t present for Manly’s victory speech, but her new husband, John Kidder, who is running for the Greens in B.C. federally, served as spousal proxy. He joined Manly on stage, holding the couple’s small dog, to read a congratulatory email from his wife who was en route to Ottawa. He offered his own blessing: “Nobody works harder than my wife except maybe Paul,” he said. “They are going to be a force.” Manly put it in optimistic perspective: “Our campaign slogan was ‘Together we can do this.’ And in the fall we’re going to do it all over again.” And that of course is when the real “message” will be delivered.