Justin Ling: The NDP leader was too busy roasting the incumbent to sell himself as a PM-in-waiting 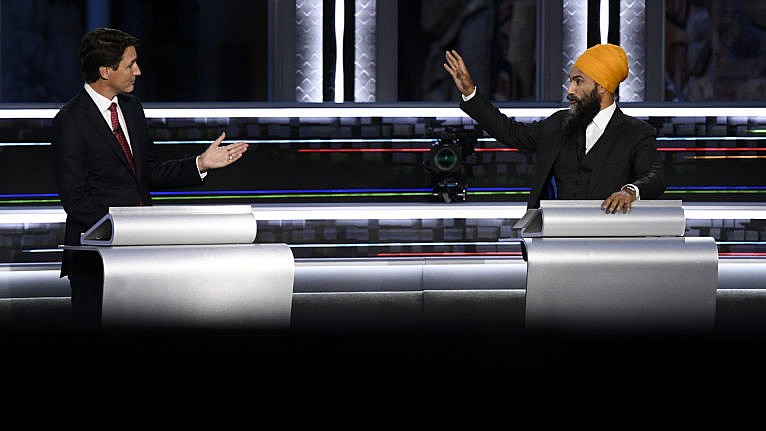 Jagmeet Singh spent so much time making the case that Justin Trudeau is the wrong leader for Canada, he forgot to make the case he’s the right one.

Over a snippy two-hour debate, Singh chastized the Liberal leader for failing on climate, pharmacare and reconciliation with Indigenous peoples—and he was frequently the most effective interrogator of Trudeau’s oft-lauded bona fides.

But when it came to offering voters specifics of how he would govern, or even a compelling emotional reason why he’s better suited to lead than the others, Singh largely repeated the script he’s been reading for the whole campaign.

Would he scrap the Trans Mountain pipeline upon being elected? Who knows. Where would his investments go to get CO2 emissions down by 50 per cent? Couldn’t say. How would he protect Indigenous ancestral rights to logging, fishing and hunting? No idea.

Voters at home would certainly come away from Thursday’s debate knowing that Singh wants to “make the rich pay their fair share,” as if that were ever in doubt. But that often sounded like the deepest policy proposal he had under his belt.

But that doesn’t mean he wasn’t effective on the stage.

Going into the debate, a strategist on Singh’s team told me not expect fireworks from the NDP leader. During the campaign, Singh isn’t even keen to interrupt his own staff when they argue; they said not to expect anything different onstage.

Singh, however, was most effective when he poked Trudeau in the chest.

“You can’t a knee one day and take Indigenous kids to court the next day,” Singh told Trudeau, over Canada’s continued failure to ensure decent care for Indigenous youth.

The Liberal leader was, himself, fact-checked by longtime advocate Cindy Blackstock, who tweeted: “You have a right to litigate against First Nations children and have chosen to do so—you don’t have the right to make false statements about it.”

And there’s pharmacare: “You committed, you campaigned on it, you included it in your throne speech—now you’ve abandoned it,” Singh told him.

On climate, too, Singh caught Trudeau in a falsehood: After needling the Liberals for missing emissions target after emissions target, Trudeau sniped back: “We haven’t missed any targets.”

Of course, that’s not true either. Under Trudeau, Canada has blown past the targets it committed to under the Kyoto Accord (targets, of course, jettisoned by a then Conservative government) and the Copenhagen Accord. As Singh and Green leader Annamie Paul were quick to point out, Canada has been the only G7 country to see its emissions rise in recent years.

But a good effort in keeping the incumbent honest doesn’t exactly build a strong case to elect a party that’s never governed on the federal level.

And to a large degree, Singh walked onto the debate stage either with one hand tied behind his back or with a dirty secret he’s intent on hiding—in their infinite wisdom, the NDP has opted to keep their costed platform a secret until Saturday.

That meant that, with every opportunity to put his “bold” and “ambitious” plan on the table, he lacked any figures to back it up, instead pivoting to platitudes and incessant optimism.

If Trudeau “announces things, then never delivers,” as Singh said at one point, then the NDP strategy appears to be: Never announce things.

It didn’t help that Singh was stood next to Paul, who frequently elucidated the same criticisms of the Prime Minister with a bit more specificity.

At the end of the day, Singh’s gesture towards Erin O’Toole and Trudeau—”let me tell you, you’re not stuck with these two”—might be his most effective gambit, but it won’t make him Prime Minister.