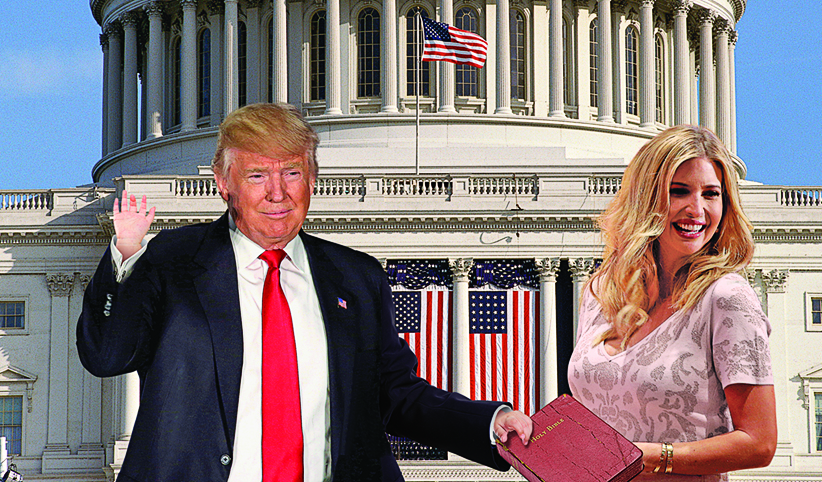 Chief Justice of the U.S. Supreme Court: Please raise your right hand and repeat after me.

Donald Trump: OK, sure. I can do that no problem. And, by the way, you’re going to notice right away: normal hand. Regular-sized hand. Very presidential.

Trump: I do that. I swear it and I mean it, big league. No one is more solemn at this moment. Melania, close second, also very solemn. The kids, everyone. Don Jr. was just saying this morning: “Solemn day.” And I was like, “You’re right.”

Chief Justice: That I will faithfully execute . . .

Trump: And I will, by the way—I will execute very faithfully, if you want to know the truth. Jobs coming back. Wall going up—or a fence maybe. Something wall-like. ISIS—kaboom! Dreams coming true, even for the haters and the losers. We’re going to make America great again for everyone. Even Rosie O’Donnell, OK? Although maybe not her. I know that’s not part of the oath but honestly maybe it should be: “That I, the president, will make America great but not for Rosie, who is the worst.”

Chief Justice: The office of president of the United States . . .

Chief Justice: And will to the best of my ability . . .

Trump: Which is excellent ability, by the way. Very good with the ability. No one’s got more ability than Trump, if you want to know the truth. I was just saying the other day . . .  actually hang on a minute . . .  [takes out phone and types] . . .  I just had to do a tweet because I remembered on CNN—terrible liars, literally the worst and most horrible people, total scum—on CNN they put on this loser with dumb glasses and a stupid face who said, “Trump has no ability. He has the least ability.” And yet many people are saying: not true. Lots of ability. Possibly too much ability, to be honest. Pretty soon the American people, they’re going to be calling the White House and they’re going to be saying, “Mr. President, please stop. Stop having so much ability.” And honestly, I’m not sure I’ll be able to.

Trump: Pretect, profend and deserve. And I do deserve, by the way—meaning this, the presidency. I do deserve. People are saying, “Oh, look, Hillary got more votes”—but people voted illegally. Millions. And they all voted for Hillary probably. Massive fraud. Mexicans. Syrians, maybe. Several hippies. I don’t think she actually got any real votes, honestly. How could she have? Maybe Bill but also maybe not Bill.

Chief Justice: The Constitution of the United States . . .

Trump: Great constitution, by the way. One of the best. The best, actually, and it’s not even close. Other constitutions are like, “I wish I was that constitution.” And can I just say: Is this a great crowd here, or what? Thousands. Millions. Tens of millions maybe. Biggest ever probably. And I love you all! All of you, even those who aren’t staying at the Trump International, just down the street from the White House, very convenient and luxurious. Saw a review online—the guy said, “Great sinks.” And he’s right. He’s very right. The best sinks and the best everything.

Chief Justice: So help me God.

Trump: You betcha. Great oath. Very good job by you, Mr. Chief Justice. So does a guy just come now and give me the nuclear codes? Or is that like an email thing with the Yahoo and the clicking?