Perry Bellegarde: New leader of the Assembly of First Nations 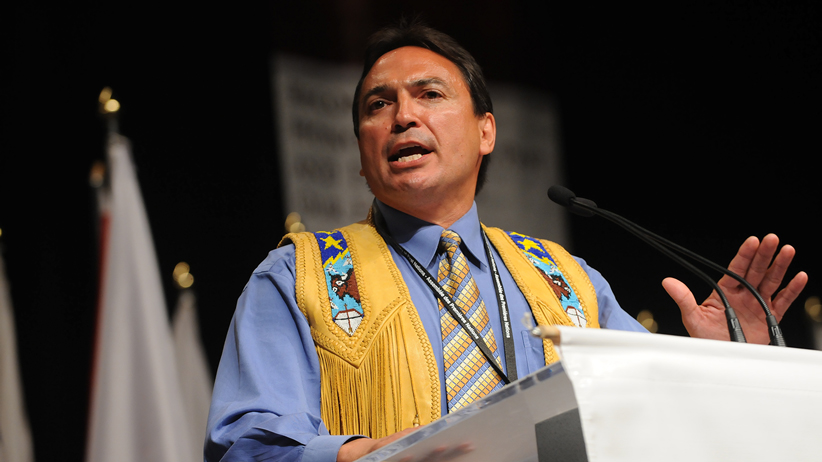 On the surface, little distinguishes the candidates vying to become the Assembly of First Nations’ next national chief at its special assembly in Winnipeg next week. All three are middle-aged men. Each has spent the bulk of his professional life in First Nations governance. And they’re all vowing to tackle the AFN’s most pressing concerns: repairing divisions within the fractured organization, and improving relations between the AFN and the federal government.

It’s far from clear that either goal is attainable. It’s been a tumultuous 18 months in indigenous politics: Idle No More reshaped the national debate, giving voice to a disenchanted grassroots, and Shawn Atleo abruptly resigned—accused by supporters of being too cozy with Ottawa—thereby derailing the hard-won, $1.9-billion federal deal on First Nations education he’d championed. Indeed, some think the AFN could collapse under the weight of its myriad internal divisions and competing regional interests.

Atleo, a pragmatist and modernizer, came in vowing to “smash the status quo.” The next leader will almost certainly mark a return to it—and the fractious, dissonant relationship with the feds that has characterized much of the AFN’s 32-year history.

To move forward, the Stephen Harper government must “first acknowledge that we are an order of government and that we have a right to self-determination,” says front-runner Perry Bellegarde. The charismatic 52-year-old head of the Federation of Saskatchewan Indian Chiefs considers the AFN’s relationship with Ottawa “adversarial.” He opposes the Harper government’s key fiscal plank—oil sands expansion—and the education reform act, its major First Nations policy initiative. (Bellegarde says the Saskatchewan chiefs were “not pleased” with the bill.) In the recent controversial battle between Ontario and the parents of an 11-year-old Ojibwa girl critically ill from leukemia, Bellegarde says he “totally agrees with and supports” the parents’ decision to decline chemotherapy in favour of traditional Aboriginal treatment. Wellness, Bellegarde argues, “is not just taking pills.”

It’s hard to imagine where he and Harper might find common ground. But, as premiers such as Danny Williams have shown, playing hardball with Ottawa plays well with your home constituency. The next national chief would be foolish not to study what happened to Atleo, whose relationship with the Prime Minister seemed to hurt him, says Wab Kinew, the University of Winnipeg’s director of indigenous inclusion. He sees a “very contentious” road ahead.

Also in the race is Leon Jourdain, chief of Ontario’s Lac Lacroix First Nation, and an advocate of a return to traditional forms of governance. But Jourdain’s candidacy is hobbled by a 10-year-old drunk driving charge, and a sexual assault charge that was ultimately dropped. “I had a really huge problem with alcohol,” Jourdain, who has since sworn off it, tells Maclean’s. “I did a lot of damage to myself.”

Bellegarde’s main challenger is Ghislain Picard, a 59-year-old Innu from eastern Quebec, and regional chief for Quebec and Labrador. Picard’s fate will depend largely on how chiefs from B.C.—Atleo’s home province—choose to vote on Dec. 10. The national chief is voted in by the country’s 634 chiefs. One-third of the AFN’s ballots belong to B.C.—a “powerful” voting faction, says Michelle Corfield. She ran Atleo’s AFN campaigns, including his first run in 2009, when he defeated Bellegarde after a record eight rounds of voting. “B.C. chiefs are looking for someone to stabilize the relationship between the federal government and the AFN,” says Corfield. Picard, the AFN’s interim chief, provided calm through a “very difficult time.”

B.C. chiefs might also consider Atleo’s treatment by the national executive, which includes Bellegarde. Atleo reportedly felt betrayed by its decision last May to come out against the education deal. The B.C. chiefs, however, have never voted as one bloc and it is unclear how many will make the trip to Winnipeg.

Picard’s approach to Ottawa appears conciliatory compared to Bellegarde’s. Chiefs can’t expect to engage government “strictly on their own terms,” he tells Maclean’s. Picard says the AFN was fundamentally “shaken” by the events of the last 18 months, and is in desperate need of reform.

Kinew worries that the AFN, under attack from all sides, risks “death by a thousands cuts.” Aboriginal people “need something more powerful and inspiring than a lobby group.” At no point has the need for a strong, national Aboriginal voice been more critical, Kinew adds. But, with the rise of social media, the surging power of the grassroots, and the balance of power tilting to off-reserve Natives, acting as a unified indigenous voice has never been more difficult.