John Horgan wants to capitalize on his party's recent tide of popularity, but the move carries risks 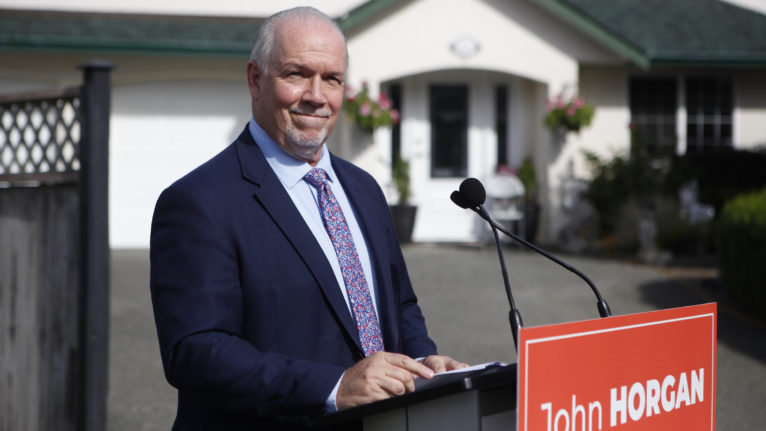 Horgan announces there will be a fall election IN B.C. Chad Hipolito/CP)

On Sept. 21, B.C. Premier John Horgan finally answered the question political observers had been speculating about since July, when he hinted that voters could be casting ballots before the October 2021 election date fixed by provincial law. Horgan has made his move, and British Columbia has an election date in the midst of a global pandemic—Oct. 24.

Citing difficulties passing legislation in the last session, Horgan claimed there was a “great divide” between his NDP and the partnering B.C. Greens that helped this party form a minority government in 2017. With “instability” in the legislature and the need for a steady hand to steer the province through turbulent times, Horgan called the year-long wait for the next election “wasted time.” He’s looking for a new mandate—this time with a majority.

But as the date approaches, Horgan’s gambit raises questions for himself, for his opposition counterparts and for voters that go beyond those that arise in a standard election campaign

Will voters punish Horgan for calling an election in a pandemic?

In the early days of the outbreak, Horgan received acclaim for his government’s handling of the crisis. But the day he made the announcement, data from Health Canada showed B.C. had 43 active cases of COVID-19 per 100,000 people—the highest rate in the country. With the disease on an upswing, the idea of lining up to cast a ballot in the presence of others could dampen the sense of civic duty for some.

Which party, if any, will suffer ill effects from their reluctance?

Early in September, an Angus Reid Institute poll found that one in three B.C.ers were uncomfortable heading to the polls in-person given the threat of COVID-19. More worrying for the incumbents, some two in five New Democrat supporters felt that way.

Perhaps Horgan had his eye on other results, such as the 19-point lead his party had over the Opposition B.C. Liberals, or an earlier poll, where he topped a list of nine Canadian premiers with the highest approval rating in the country. From that perspective, an early election might’ve sounded irresistible.

Other signs seemed to bode well for the NDP. Just a week before Horgan made the call, New Brunswick Progressive Conservative Party leader Blaine Higgs leveraged strong approval ratings over his government’s handling of the pandemic with an election win that gave him his first majority. Voter turnout was 66 per cent. Horgan, leading his own minority government at the time, had to be taking notice.

But Higgs, it’s worth noting, didn’t go in looking like a welsher. By calling a snap election, Horgan is breaking a four-year confidence-and-supply agreement with the B.C. Green Party. Signed in 2017, and founded on the principal of “good faith and no surprises” the pact assured the New Democrats of Green support on matters of confidence. In return, Horgan agreed not to call an election before the fixed date.

Asked why he gave up his end, Horgan said the issues of 2017 are not those of the day, and that the agreement did not anticipate a global pandemic. To suggestions that the move was a power-grab, he could only say that “we are involved in politics.” As a result, though, criticism of Horgan by the Liberals and their leader Andrew Wilkinson has centred on whether the former is a politician who can be trusted.

Can the Greens resurrect their fortunes?

When it comes to snap elections, voters don’t always favour the bold. One need only look to Alberta in 2015, when the late Jim Prentice, Progressive Conservative leader at the time, made an ill-advised early election call that gave the province’s NDP its first taste of power; it jumped from four to 54 seats in a surprise majority win. Perhaps the B.C. Green Party is hoping Horgan’s gambit will allow history to repeat itself, just five years later and a little farther west.

In the last election, the Greens won three seats, whittled down to two after then-leader Andrew Weaver left to sit as an independent, leaving the party further back than where it started. What’s more, leader Sonia Furstenau was only elected to the role a week before Horgan made the call, leaving her party scrambling to cobble together campaign plans at a time when pressing flesh and holding rallies puts people at risk.

That doesn’t mean the Greens are discouraged. The day after the election announcement, Furstenau said that the party had “hit the ground sprinting” thanks to an outpouring of donations. After the first day of fundraising, she added, the party had already pulled together three times as much as it had on the first day of the 2017 campaign.

Can B.C. have a safe election?

And will safety come at the cost of a timely and orderly release of results?

New Brunswick did it, and Saskatchewan has set a fall date as well. But it was provincial health officer Bonnie Henry who assured B.C.ers that a COVID-era election could be safe, and that she had been working with Elections BC since March to make sure of it.

While electronic voting is still out of the question, voters will have the option to drop by polling stations (in advance as well as on election day), where they’ll note precautions aimed at lowering risk of infection, from physical distancing and capacity limits to masked election officials and hand-sanitizing stations. But this year, Elections BC reckons more people are just going to mail it in.

Anton Boegman, B.C.’s Chief Electoral Officer, said the office expects 35 to 40 per cent of voters will opt to cast ballots by mail, compared to about 0.3 per cent that used the method in 2017. The office has already received 20,000 requests for mail-in packages in the 24 hours after Horgan called the election.

But the high volume of mail-in ballots could delay the final count, Boegman noted. Absentee votes, including those sent by mail, he explained, require close examination and aren’t counted until about two weeks after election day, typically delaying the final count to about 17 days after the election. Elections BC can handle up to 200,000 ballots in that time frame, he added, but any more than that could further delay the final count.

Is the pandemic the only issue at stake?

Public health may be front of mind, but parties and their candidates will likely grapple with questions beyond the province’s handling of COVID-19, and the fallout surrounding it. Almost four years before the pandemic, B.C. declared the opioid crisis a public health emergency. As of Sept. 28, COVID-19 has been linked to 230 deaths, whereas B.C.’s Coroners Service ties fentanyl to 103 deaths in August, alone, and 144 in July. Measured as a threat to human life, it is arguably the greater public health crisis.

The great and late (read: delayed) Site C Dam, B.C.’s most expensive public infrastructure project, is still mired in problems and its fate could prove to be a sleeper issue as well, along with affordable housing, and any number of issues surrounding the battleground of Surrey. There’s the question of what the kind of policing model would replace the RCMP in the city—particularly important after the death of George Floyd led cities and countries around the world to re-evaluate the relationship between civilians and police. Or there’s the question of how to deal with Surrey’s problematic portable classrooms and overcrowding if they’re scrapped (especially in the age of Covid).

Will teachers strike in the thick of the campaign?

Shortly before Horgan asked Lt. Gov. Janet Austin to dissolve the legislature, B.C.’s teachers’ union filed an application with the province’s labour relations board over unsafe work and learning conditions in schools given the risk of COVID-19.

With classes back in session this month, the British Columbia Teachers’ Federation says members are feeling pressured to work in crowded classrooms, and that many districts don’t have the resources they need to enact health and safety measures that prevent infection. They want the government to address their concerns, but Horgan had other ideas around who bears that burden.

“Safe operation of our schools is not the responsibility of the premier,” he said at the election announcement, pointed to school boards, administrators and trustees instead.

While teachers wait for the labour board in weigh in, the province is on notice—the application makes that clear. If the lives of teachers and students are at risk, the union might take action, legal or otherwise, and “some groups of teachers may consider job action.”