Can Doug Ford win? What happens in Ward 2? And are there any more surprises to come in this soap opera? 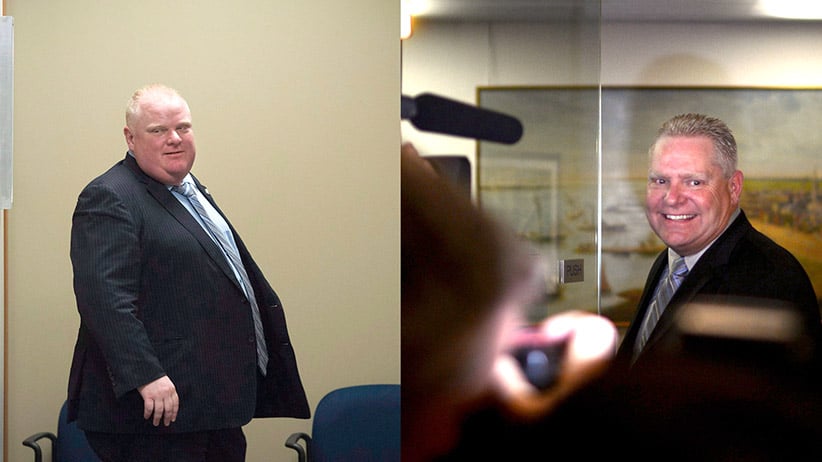 Just a few days ago, the idea was unthinkable. But when Toronto Star reporter Jennifer Pagliaro asked Doug Ford on Wednesday night whether or not there had been any discussion on whether the working diagnosis of a tumour for Toronto mayor Rob Ford would preclude him from the race—and whether or not Doug would take his place—the city’s collective imagination got rolling. Here are the five key questions about what happened and where we go from here:

Yes, and it’s legal, too, since all Doug did was beat the deadline to appear on the ballot for the mayoral race—it’s not technically a switch-a-roo, although that is how it’s being positioned. There’s nothing inherently wrong with taking up someone’s banner, though it may feel greasy: shuffling Rob to run in Ward 2 is a move to centralize and maximize power, with the expectation that Doug will draw the identical base as Rob being a rather remarkable act of ego and self-aggrandizing bravura.

No. Despite improving numbers, the odds continued to be low that incumbent Rob would be able to clear a low ceiling for support growth, but without the incumbency—and, frankly, the true name recognition—Doug should expect his initial numbers to dip from Rob’s. Certainly, there will be a large Ford Nation core that will stand by their man (with the same last name), but the worst-case scenario would find Doug falling to third place with the news, with John Tory the expected beneficiary for espousing policy closer to Ford’s (though Olivia Chow won points among Ford supporters for her more compassionate take on Rob’s departure from the race). On its own, the act of replacing Rob will certainly not gain Doug any support; any feelings about Rob are doubled-down by his habit of taking even more hardline stances as councillor. Indeed, it’s hard to imagine Rob Ford as dignified, but in comparison to the bulldog Doug—who represented a kind of id for Rob—the mayor could be downright statesmanlike. And the last time that Forum Research polled Torontonians about an election where Rob was replaced by Doug, the numbers revealed a four-per-cent drop for the Ford candidate, with Doug registering lower approval rates and higher disapproval ratings than Rob. Doug could receive a novelty bump right away in the first polls, but it’s improbable at best.

Rob Ford will win, and probably from his Mt. Sinai hospital bed. He’s obviously the star candidate, and this step back into a ward that constitutes the core of Ford Nation will not go astray. Do not cry for Michael Ford, the tabula rasa who leaves as he arrives: a bland, impact-free candidate who redefined how just little one could affect political discourse. (He will now run for another plum position, trustee for the Toronto District School Board, against two-term trustee and former PC MPP John Hastings; it is unclear whether Doug’s nephew knows what the position entails.) Instead, cry for Andray Domise, the young, black and energetic candidate who had to this point been running a fine campaign on the strength of the very reasonable belief that the family of a man who has been recorded spewing racial invective lacked the moral authority to lead his constituency.

Yes, and his chances seem even better now than they were yesterday. A big part of the Ford campaign has been not just to highlight Rob’s redemption story, but also to show him as a victim. It’s the only explanation for the odd bomb threat that City Hall received last month (despite the fact that building security said that this was a regular occurrence) and for the impromptu press conference on Wednesday when the tumour was but a “working diagnosis” (the kind of thing that only happens on TV medical dramas and is rarely uttered by real doctors unwilling to send patients into panic mode). With Rob expected to sweep to victory in Ward 2, he will continue to dominate media coverage and bog down council work, painting his peers with broad-strokes generalizations and antagonizing claims, all while inevitably dubbing whoever is elected as mayor a bleeding-heart lefty and dismissing his or her term as an annoying destiny-interrupting liberal interregnum—a similar road map to his election in 2010. If Toronto was able to vote out Rob Ford in October—they can now no longer send him away with a mandate—it would have made it far more difficult for Rob Ford to run again in 2018.

5. Are there more surprises to come?

Likely not; the deadline to appear on the ballot has now passed. Although if there is more interest than before in who will become Doug’s campaign manager, it would be unsurprising. (Amin Massoudi, a close aide of both Rob and Doug, is a likely choice; less likely candidates include Kathy Ford, Diane Ford, and David Soknacki’s cat.)