Five things Kathleen Wynne is doing to save her political skin

With an election looming next year, Ontario's premier is cratering in the polls—and desperate times call for desperate measures

Kathleen Wynne can be accused of many things, but not inertia. With an election campaign looming next year, and her approval ratings at epic lows, the Ontario’s Liberal premier has been a political pinwheel, sending announcements, agreements, strategic leaks and policy reversals flying in every direction.

Sophisticates will shrug. A pol’s got to save her skin, after all, and the pressure within Wynne’s party to do something—anything—must be enormous. But the spectacle Ontarians are witnessing is less common than you think. Most office-holders have obeyed the writing on the wall long before their positives reach 16 per cent. But Wynne’s in a rare position, having spanned the fin de siècle in 2014 with her upset majority victory, by which point the Grits had already been in power for more than a decade. Just three years ago, she was presenting herself as a figure of change, with a plan to govern from what she called the “activist centre.” Today her vision is at best partially fulfilled, which might explain why she’s stated her intention to lead her party into the next election.

To have any chance of winning, though, Wynne has to turn those numbers around. Here are the desperate measures she and her government have taken in hopes of staving off electoral disaster.

Keeping the lights on

No issue is a bigger millstone for the Liberals than sky-high electricity bills, which climbed 70 per cent for homes and small business between 2006 and 2014 (Wynne was in cabinet through almost all of that period, though never as energy minister). So last September, the province announced that it would rebate to customers its eight-per-cent portion of the harmonized sales tax on power bills.

This band-aid move might have done more harm than good. The premier offered it up as much-needed relief. Yet for the average household, it computed to a measly $10 per month saving. In the end, her rebate probably drew more attention to the Grits’ well-documented missteps on the hydro file than it did to her empathy.

Starved for cash with which to build transit infrastructure, Toronto Mayor John Tory took the political plunge of his mandate in November, promising to toll the two city-controlled highways entering his sprawling metropolis. Wynne, he says, personally encouraged him to pursue the model.

But he’d barely floated the plan when the premier declared she’d use the province’s power over municipalities to scotch it. Instead, the province is offering an added $170 million in gas tax revenue

It’s easy to see why. Tory had been proudly justifying tolls as a way to make 905 residents “pay their fair share”—a reference to suburban commuters who travel Toronto’s highways daily but whose property taxes don’t go toward their upkeep because they live outside the city’s limits. Toronto might be big. But no party can hope to win power in Ontario without at least a bite of the ridings in 905, the populous region that forms a giant necklace around it.

There, Wynne’s move has been warmly greeted. Two weeks ago, the Toronto Sun published a poll suggesting 56 per cent of voters in the 905 were pleased by the decision. 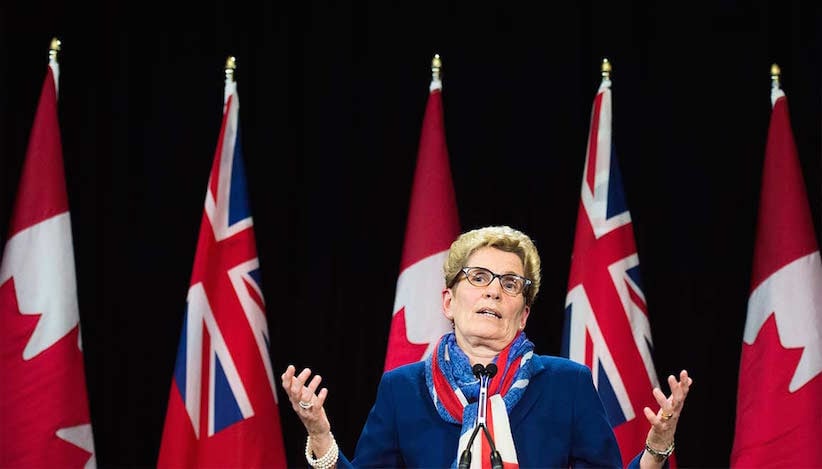 Wynne might be the best friend Ontario teachers ever had (and vice versa: teachers’ unions have contributed generously to Liberal candidates’ and leaders’ campaigns since the 2000s). But that wouldn’t stop teachers’ unions from strong-arming the Grits at an opportune moment. And few things are worse for a governing party than a pre-election teachers’ strike that leaves families scrambling for child care.

To stop that from happening, the government has offered to extend its contracts with major teachers’ unions for two years, with sweeteners like a four-percent pay hike over the two years, a class-size cap of 30 pupils for kindergarten and more money for classroom supplies. The deals haven’t been ratified, but it’s hard to imagine the unions saying no. This is, after all, the government that at one point was basically paying them to negotiate.

They’d be well-advised to take what they can get while the Grits are still in power.

Keeping the lights on, part two

Aware that their rebate was too little, too late, the government has been floating an array of ideas for across-the-board cuts to power bills. Among the measures on the table: a cut to the so-called “global adjustment,” which frequently makes up the lion’s share of power bills but is not visible on most bills.

The Wynne government is reportedly aiming to knock a further eight per cent off bills, the CBC reports; it’s also considering using money from general government revenue to offset power costs for lower-income Ontarians. Again, there’s as much risk here as potential reward. At what point do Ontarians feel as if the money going into one of their pockets is being taken from another?

You’ll still have to pay for it, but it might be closer at hand. By summer, Wynne’s attempt to drag Ontario’s liquor-sales regime into the 20th century (yes, we mean 20th) will be in full swing—which is to say, a fraction of the province’s supermarkets will stock beer, wine and cider.

The ultimate goal is to get suds and cider into 450 stores, and wine into 300 of those. But it’s happening at a glacial pace, because the province must navigate a knot of trade agreements and competing commercial interests. When all is said and done, Ontarians will be able to buy soft grog in less than a third of their grocery stores.

By then, they’ll be able to toast the premier who made that possible. Or her defeat.

Five things Kathleen Wynne is doing to save her political skin