For access to the Ford government, two names matter most

Chris Froggatt and Kory Teneycke are close allies of the premier. They also run thriving start-ups that help companies do business with the government. 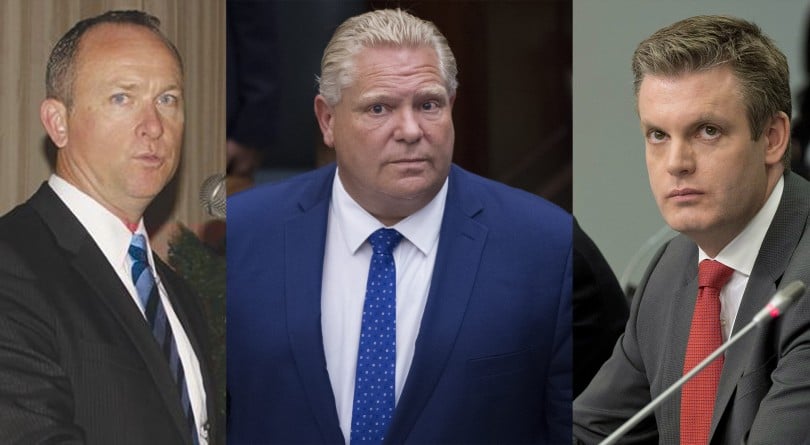 During the frantic, successful campaign to make Doug Ford premier of Ontario last spring, the three men who were responsible for Ford’s messaging often told subordinates that they were like a “three-legged stool,” indivisible and in charge.

Six months later, Dean French is chief of staff to Ford while Chris Froggatt and Kory Teneycke, the other legs of the stool, are running thriving startups that help private companies do business with the government, while they remain close political allies.

Froggatt, who was vice-chair of the campaign, travelling on the bus with Ford and French, and then led the transition team that selected Ford’s cabinet and hired chiefs of staff, registered the web domain for his new firm, Loyalist Public Affairs, on Aug. 1, 2018, a month after his work on the transition team.

Teneycke, who was campaign manager, working in the war room in Toronto, incorporated his new company, Rubicon Strategies, on June 27, 2018, corporate filings show, just 20 days after the election. He was reported by the Globe and Mail to have pitched his services to Hydro One not long after the election.

Neither Froggatt nor Teneycke have registered to represent clients to the government they helped establish, and are prevented by law from doing so, but their junior colleagues are free to make the calls, and their firms have signed up big companies in the shakeup that followed the change of power in Queens Park after 15 years of Liberal government.

A number of campaign officials and former political staffers and politicians—including Frank Klees, a former PC MLA and Peter Van Loan, a former Tory MP—have set up shop opening doors with the Ford government for private sector clients, but none have the access that Froggatt and Teneycke enjoy.

Froggatt has a friendship with French going back to their childhood in Peterborough, Ont. Teneycke, though not as personally close, is in regular contact with both French and Ford, and they have ongoing political roles that ensure access throughout the governing party: Teneycke is the campaign manager for the Progressive Conservative Party and Froggatt is the chair of the party’s Election Readiness Committee.

Government insiders, speaking off the record because they are not authorized to discuss these issues, say that  French has mentioned Froggatt and Teneycke in meetings with other staff, including at the weekly meeting of ministerial chiefs of staff, emphasizing their ongoing importance to the government.

Ministerial staffers and conservative lobbyists competing with Froggatt and Teneycke have taken note of the continued close relationship. In the hyper-competitive industry, clients pay $20,000-a-month retainers to well-connected operators who understand the government, so evidence of access is worth money.

Froggatt, a former chief of staff to John Baird in Stephen Harper’s government, is seen as a trusted political veteran with unique access. While working with Baird, he helped bring in Harper’s Accountability Act in 2006, which toughened rules on lobbyists. In Ontario, lobbyists are subject to the looser rules in the Lobbyist Registration Act. In Ottawa, for example, lobbyists must register their meetings, while in Ontario they only have to register their contracts.

Froggatt, who lives in Perth, Ont., has been travelling to Toronto frequently, holding meetings in the oak-panelled rooms of the Albany Club, the elite Conservative redoubt. He attended Ford’s office holiday party in a Mississauga banquet hall on Dec. 11, sitting at a table with French, who was playing Santa, then-principal secretary Jenni Byrne and other senior aides, including Lyndsey Vanstone, who produces and stars in promotional videos of the premier.

Froggatt said in an interview in late January that it is not difficult to keep his work on behalf of his clients separate from his political work with the government. “It’s actually very easy to avoid. You just don’t talk to anyone about client files.”

Teneycke offers a similar understanding of the inner workings of Ford’s government.

Teneycke has moved in and out of politics and government relations, showing persistence and creativity. While he represented the Canadian Renewable Fuels Association, helping them win millions in federal funding for biofuels, for example, he employed a mascot, Corn Cob Bob (featured in a spot on the Daily Show with Jon Stewart). He later served as Prime Minister Stephen Harper’s director of communications and was vice-president of the Sun News Network.

The promotional text on the web site for Rubicon captures something of his intensity: “No challenge is too difficult and we are ruthless at finding a pathway to success. Caesar would never have crossed the Rubicon if he wasn’t confident that he had the data and intelligence to mount the coup that created an Empire.”

Teneycke said his firm is scrupulous about observing the law. “Our firm focuses on managing digital campaigns, providing strategic advice to our clients, and in some cases, engages in direct government relations,” he said in an email. “Anyone at Rubicon engaged in direct lobbying on behalf of a client is properly registered in compliance with the act.”

Both firms have clients who have scored noteworthy wins.

Rubicon, for instance, registered junior lobbyists to press the government to give a $34.5 million grant to Maple Leaf Foods for a new chicken-processing plant in London, Ont., although it appears that it will lead to a loss of 300 jobs.

Critics, including the Canadian Taxpayers Federation, have pointed out that the grant seems odd because while campaigning, Ford promised to stop giving money to companies. Maple Leaf is a customer of Ford’s family business, Deco Labels.

The province and Maple Leaf say the grant had already been approved by the previous Liberal government.

Teneycke’s partner at Rubicon, Michael Coates, who served on Ford’s transition team, has a longstanding business relationship with Maple Leaf. In an email last week, Maple Leaf vice-president for communications Janet M. Riley said that Coates “assisted us on a short-term basis last summer to convey the importance of maintaining the grant that had been approved by the Wynne government.” She later emailed to clarify that Coates advised Maple Leaf but a junior associate handled the lobbying, as is reflected in the lobbying registry.

“To our knowledge, no grants approved by the Wynne government have been cancelled by the Ford government, so the fact that ours remains in place is not unique,” added the spokesperson.

“The client was signed and overseen by Mike,” Teneycke said in an email. “Lobbying was done by two of our consultants: Patrick Harris and Christine Simundson.”

Froggatt’s firm has signed up some big clients, including Bruce Power Inc., the Canadian Nuclear Association and the Progressive Contractors Association of Canada.

A lesser-known client scored a big victory recently when cannabis security firm 3|Sixty Secure Corp announced it had reached an agreement to “provide security services” to the Ontario Cannabis Store. Three Loyalist lobbyists registered on the file to “educate the government on the appropriate security measures for the cannabis retail as they develop cannabis retail regulations,” but not, according to an email from lobbyist Dan Mader, to obtain a contract.

Neither 3|Sixty nor the Ontario Cannabis Store would reveal the size of the contract.

David McArthur, vice-president of government relations for 3|Sixty, said in an interview that Loyalist had no role in landing the contract. “We had a separate mandate,” said Loyalist’s Dan Mader, who worked on the file.

Several other Ford campaign officials went on to prominent roles in lobbying businesses after the election.

Michael Diamond, who was campaign manager of Ford’s successful leadership bid and campaign director, had an existing lobbying business before the election, Upstream Strategy Group, but landed significant clients after the election. One of them is the Ontario Association of Radiologists, who are involved in a battle with the Ontario Medical Association over wage increases.

Melissa Lantsman, who headed up Ford’s war room, joined Hill+Knowlton Strategies as Toronto vice president of public affairs on June 27, just days after the election, and has since registered to represent 20 clients, including Bayshore Health Care.

Melanie Paradis, who worked with Lantsman as a press secretary, is lobbying for McMillan Vantage. Among her clients is White Pines Inc., a German wind power company seeking compensation from the province after it cancelled an almost completed wind power project in Prince Edward County.

Several former politicians are also helping private businesses connect with the Ford government. Peter Van Loan, who served in Stephen Harper’s cabinet and was president of the provincial party, is registered for nine clients, all developers seeking to influence the government’s land use policy.

Amir Remtulla, who was chief of staff to Doug Ford’s late brother, Rob, when he was mayor of Toronto, also became a lobbyist after the election, registering for 17 clients, including many developers.

Developers who own land in the greenbelt around Toronto are said to be pushing hard for changes to the laws that prevent them from building new subdivisions. During the campaign, Ford promised to open up the greenbelt to development, then reversed himself.

Critics say Bill C-66, which Ford’s government tabled in December but has not yet passed, would have allowed municipalities to override greenbelt protections and allow development on land that is now protected.

On Jan. 23, the government signalled that it will not proceed with those measures.

Ford and French would be wise to be cautious in their dealings with their political friends, said Aaron Wudrick, federal director of the Canadian Taxpayers Federation, because Ontarians were rightly tired of stories about well-connected Liberals profiting from their connection to the government.