For the record, Stephen Harper's resignation message to constituents

'Today I wish to inform you that I am stepping down as the member of Parliament for Calgary Heritage,'' wrote the former prime minister

For the record, the text of Stephen Harper’s remarks following his resignation Friday as member of Parliament for Calgary Heritage:

Today I wish to inform you that I am stepping down as the member of Parliament for Calgary Heritage.

For a total of nearly 18 years, I have had the tremendous honour of representing Calgary in the Parliament of Canada. On seven occasions, I have been deeply humbled by your trust and support, time and again. And I leave elected office proud of what our team accomplished together.

We united all Conservatives behind our agenda. We cut taxes, made critical investments and balanced the national budget. We got tough on crime and put families first. We managed our G7 economy through the worst global recession since the Great Depression, and came out in the strongest position of them all. We took principled decisions in a complex and dangerous world. And, whether at home or abroad, we were always proud to stand up for Canada.

Friends, we did a lot together, but I know the best is yet to come.

Our country must continue to serve as a model of prosperity and freedom. Pursue the principles we have stood for at home and abroad, and our children, and children’s children, will inherit the Canada we know and love so dearly.

As I bid farewell to the Parliament of Canada, and prepare for the next chapter of my life, my eternal thanks to the constituents of Calgary Heritage, to the members of the Conservative Party, and to all Canadians for having given me the honour of serving the best country in the world.

Thank you to Calgarians and Canadians for having given me the honour of serving the best country in the world. pic.twitter.com/afidHZ9xgr

Today, the Conservative Party of Canada joins all Canadians in expressing our utmost respect and warm wishes to Prime Minister Stephen Harper as he steps back from his role as the Member of Parliament for Calgary Heritage, and the Canadian political stage.

In 2003, Stephen Harper was at the forefront of the movement to unite conservative Canadians across this country under one banner. It would mark the beginning of more than a decade of his principled leadership.

The record Prime Minister Harper leaves in office is a proud one. Under his leadership, Canada’s foreign policy was clear-eyed and robust, and our nation’s principles were never for sale. He was the first Canadian Prime Minister in history to address the Knesset in Israel – a strong show of support for a democratic nation that remains our best and strongest ally in a turbulent part of the world. It was Prime Minister Harper who stood up to Vladimir Putin and led the charge to have Russia removed from the G8. Under Prime Minister Harper, Canada was an active ally in the global fight against terrorism. And he helped usher in a new era of greater respect for Canada’s men and women in uniform.

Here in Canada, his economic record speaks volumes. During his leadership Canada emerged from the global recession faster and stronger than any country in the G7, which included a net gain of 1.3 million new jobs, a balanced budget, and the wealthiest middle class anywhere on the globe. His time in office saw an ambitious free trade agenda open up markets around the world for Canadian businesses, and free trade deals now signed with over 40 countries.

At the heart of that record was a recognition of the everyday challenges facing hardworking families. We proudly note that it was thanks to his principled guidance that Canadians enjoyed the lowest tax burden in 50 years – including a lower GST, income splitting for couples, and tax free savings accounts.

Finally, Canada under Stephen Harper was committed to protecting the most vulnerable in our society. His leadership saw sweeping changes to strengthen child protection laws and the introduction of the Victims Bill of Rights, which once and for all put the rights of victims ahead of the rights of criminals. The creation of the Universal Child Care Benefit helped lift hundreds of thousands of children out of poverty, and the Maternal, Newborn, and Child Health initiative has helped save the lives of millions of mothers and babies around the world.

I’ve spoken with Prime Minister Harper upon news of his departure, and I took the opportunity to thank him for everything he has done – for the people of Calgary Heritage and Calgary Southwest before that, for proud conservatives everywhere, and for all Canadians.

I also expressed congratulations for the recent honour bestowed upon him by Ukrainian President Poroshenko. The Order of Liberty, one of Ukraine’s highest honours, recognizes Prime Minister Harper’s contributions to the strengthening of Ukraine’s sovereignty. This is only the latest demonstration of the lasting legacy with which Mr. Harper departs political life.

More than anything, Prime Minister Harper loves his family, and we thank Laureen, Ben and Rachel for sharing him with us for over 20 years. We also thank Laureen Harper for her devotion to so many charitable causes and our country.

I join countless others in thanking my friend, the Rt Hon Stephen Harper for his devotion to Canada, his leadership, and his profound spirit of public service.

I have known Stephen for twenty-five years. During part of that time, he and I were leaders in the extra-Parliamentary conservative movement, at the National Citizens Coalition and the Canadian Taxpayers Federation respectively. We both served in the Reform Party caucus, and in time worked toward the goal of reuniting conservatives at the national level. And for a decade I was proud to work under his leadership as a Minister in the Conservative government that achieved so much for Canada.

Stephen’s brilliant leadership led to a renaissance of the conservative movement and Conservative Party in Canada. He took over the leadership of the Canadian Alliance when it was close to single digits in the polls, and conservatives were divided into three factions in Parliament. Through force of character, great wisdom, and endless work he managed to reunite conservative Canadians and fellow travellers to create a coalition that formed the longest-serving Conservative national government since Sir John A Macdonald in the nineteenth century.

The achievements of that government were remarkable:

These and other achievements resulted in average Canadian families having the highest standard of living and disposable incomes in the world, for the first time ever. As Prime Minister, Stephen Harper never focussed on building monuments to himself or his legacy, but on the practical needs and concerns of regular Canadians.

Personally, I thank Stephen for the opportunity to serve Canadians in several roles as a Minister, and for giving me the support to pursue bold reforms in areas like immigration and integration.

All Canadians, regardless of their political views, should also be grateful to Laureen, Ben, and Rachel Harper for the huge personal sacrifices they made to support Stephen over these past two decades. I wish all of them great joy as they now enter private life. 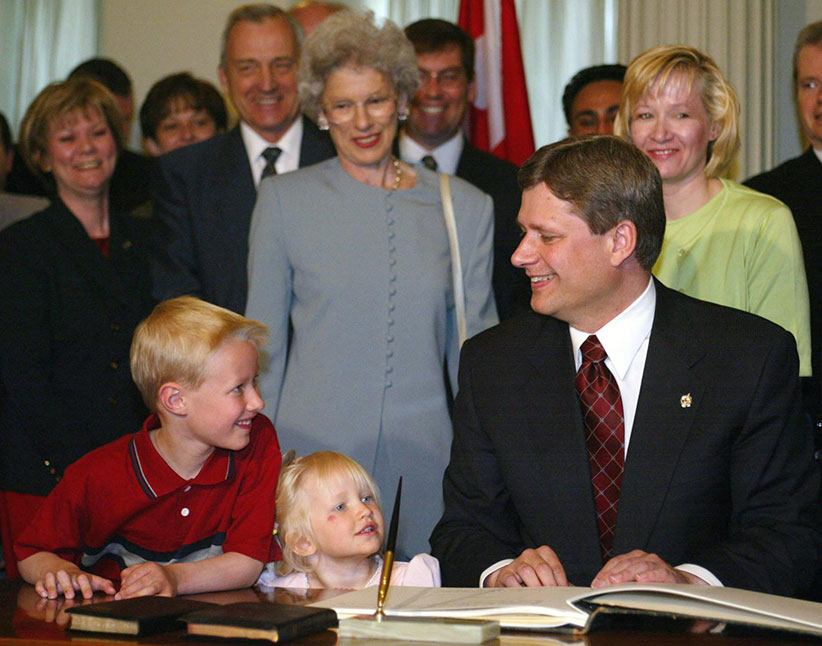 Stephen Harper, then leader of the Canadian Alliance party, is sworn in as an MP on May 21, 2002, while his mother, wife and children look on