For the record: Thomas Mulcair tries to win over Toronto 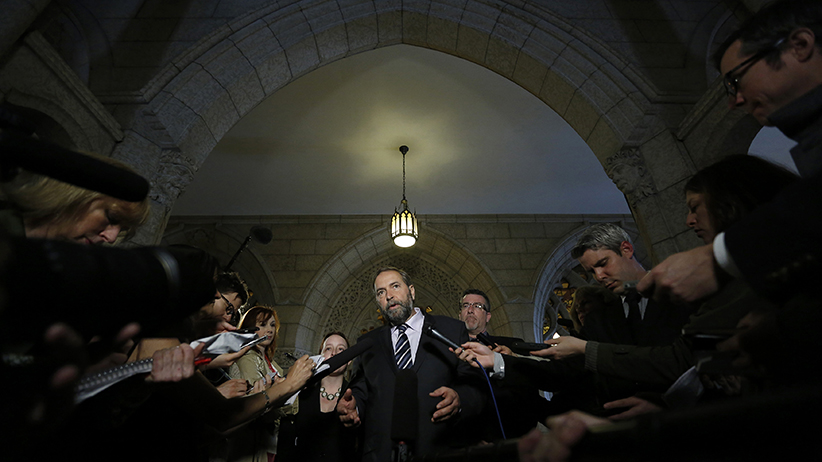 The following is the prepared text of NDP Leader Thomas Mulcair’s remarks to a rally in Toronto yesterday. Seven months away from a federal vote, Mulcair used the speech to make a bid for voters in Canada’s biggest city and to explain his urban agenda.

It’s great to be back again in this amazing city. I have been travelling throughout the Greater Toronto Area with Catherine a lot lately, and whether it’s in East China Town, Little Portugal, Parkdale, Riverdale, the Beaches, Brampton or Mississauga, one theme has emerged loud and clear: that after nine years of Stephen Harper and the Conservatives, Torontonians are ready for change in Ottawa.

And it’s not difficult to see why. Middle-class families—and those fighting to get into the middle class—are working harder but falling further behind. Incomes are dropping and household debt is rising.

The number of Canadians who are unemployed today has increased by over a quarter of a million since before the 2008 recession. Half of all households in the GTA do not have a single full-time job. Youth unemployment in Toronto is 16 per cent. The jobs that are being created are part-time and precarious. According to the CIBC, the quality of jobs today is at the lowest level in two decades.

And all the while, the gap between the middle class and the wealthiest few is at an all-time high and getting wider. No place in Canada knows this situation better than Toronto. The United Way noted just last month that Toronto is the inequality capital of Canada. For the first time in our country’s history, current generations will be worse off than their parents.

But you and I know it doesn’t have to be this way. That’s why Toronto wants change in Ottawa. And friends, that change is within reach. With just a handful more NDP seats, right here in Toronto, we can defeat Stephen Harper and get Canada on track.

Over the past months, we have announced just a few of our concrete, practical proposals that will repair the damage Stephen Harper has done and set Canada on the right path.

Under Stephen Harper, senior citizens in Toronto and across Canada can’t retire until 67. We’ll fix that and bring the retirement age back to 65.

And under Stephen Harper, more money is transferred from the middle class to the privileged few. We’ll reverse that and, as a first step, we’ll scrap his unfair income-splitting scheme. Instead of taking billions of dollars from hard-working Toronto families and giving it to the wealthiest 15 per cent, we’ll invest that money in middle-class families right here in Toronto.

My friends, Toronto is a great city. For centuries, this spot on the north shore of Lake Ontario—traditional territory of the Mississauga—has served as a place to settle, to do business, to raise families and build communities, a place where dreams are pursued. With over 80,000 new immigrants arriving each year, Toronto is where Canada welcomes the world. It is home to 1.5 million highly educated and skilled workers that make up one-sixth of Canada’s workforce. Toronto is home to 90,000 businesses, does $70 billion in exports and produces 20 per cent of Canada’s GDP. The foundations of this dynamic metropolis are made up of a people who are hard-working, generous and progressive.

And I believe that it is time to build on these foundations. When it comes to the future of Toronto and all of our big cities, I believe it’s time to think big again, to be bold again, to reach higher and build the Canada of our dreams.

It all starts here, my friends, because only when Toronto is strong is Canada strong. Canada thrives when Toronto thrives, and, as your prime minister, we will build a better Toronto and a stronger Canada. After years of being taken for granted by the Liberals and neglected by the Conservatives, it’s been the NDP’s Toronto team of MPs who have stood up and fought for this city. Your Toronto NDP members of Parliament—Rathika, Dan, Matthew, Craig, Andrew, Mike and Peggy—have fought tirelessly for Toronto. Matt’s fighting for an urban agenda. Andrew’s standing up for precarious and self-employed urban workers. Rathika’s fighting to eliminate child poverty in Toronto and across Canada. Mike’s fighting for Toronto housing and the disabled. Dan’s been working to make post-secondary education more accessible. Peggy has been fighting for rail safety in this city and clean trains, and Craig has been fighting to make every vote count in Toronto and across Canada through proportional representation.

That’s what happens when you elect Toronto NDP MPs: They stand up and fight for this city and the people who make it great.

Today, I want to share with you some of my vision and first steps for how a New Democratic government in Ottawa will work to help build a better Toronto. I believe that every city in Canada should have a modern transit infrastructure needed to move its people quickly and affordably. In the Toronto municipal election this past fall, one of the big issues was transit—and for good reason. Buses are overcrowded, streetcars are in constant disrepair and subway routes haven’t kept pace with population growth. The effects have been long delays, more congestion and gridlock. In fact, the average commute time in Toronto—over 80 minutes per day—is longer than in London, New York or Los Angeles. Gridlock costs the City of Toronto at least $6 billion in lost productivity, but it doesn’t have to be this way.

Under Stephen Harper’s Conservatives, local governments are forced to choose between transit and infrastructure. That’s a false choice. Cities like Toronto shouldn’t have to choose between better roads or better transit; Toronto needs both. And they shouldn’t have to plead for ad hoc, one-off funding commitments from Ottawa that can disappear tomorrow. Under an NDP government, we’ll create a special funding envelope just for transit and our commitment will be permanent, stable and predictable.

To build a better Toronto, local decision-makers must be able to plan long-term. Jack Layton fought and won to bring about stable funding for transit when he pushed for the federal gas tax transfer and increased transit investments. Last year, I announced that, as a first step, an NDP government would add to that permanent investment an additional $420 million for transit across Canada from the existing gas tax—$90 million annually for the GTA alone. And when we look at additional measures, I say this to municipal leaders: Come to me with concrete, locally developed plans that drastically reduce commute times—and we will be your partner. And let me say directly to Mayor [John] Tory and the entire city council with a New Democratic government in Ottawa: You will have a long-term, stable partner for transit and together we will get the people of Toronto moving.

I believe that every young family with children should get the support they need, and that means quality affordable child care. Today, there are approximately 20,000 families in the city of Toronto on waiting lists for affordable child care and tens of thousands more who need access to affordable quality child care. The city of Toronto has the highest toddler fees in Canada, and Brampton is the least affordable city for child care in the entire country. In Brampton, fees are worth 36 per cent of a woman’s average income, the equivalent of four months of work. And remember: It’s almost always women who make sacrifices in their careers, when there’s no child care. A New Democratic government will build a better Toronto by introducing $15-a-day child care and, once fully implemented, will fund one million spaces across Canada—164,000 spaces in the GTA alone.

We also believe affordable housing in Canada is a right. Today, nearly 100,000 families are on the wait list for social housing in this city alone. The city and the province cannot do it on their own; they need a reliable partner in Ottawa. In 1972, David Lewis secured the modern federal social housing strategy and, in 2005, Jack Layton’s Better Balanced Budget invested over a billion dollars into affordable housing. These were important steps, but, to address the seriousness of the housing crisis, we have to take it to the next level. A New Democratic government will build a better Toronto by becoming a long-term, stable partner to build affordable housing. I’ll appoint a minister responsible for urban affairs with a mandate within the first 100 days of taking office to identify worthy extensions of the social housing investments that are soon set to expire, and identify new investments to ensure we tackle the crisis of affordable housing and homelessness in Toronto and across Canada.

We believe that every new Canadian who comes to this great country should be able to pursue the Canadian dream, with all of their talent and skill. Millions do this every day; it is one of the things that makes Toronto great. But still, many more new Canadians who want to live to their fullest potential can’t—because the Harper Conservatives are moving far too slowly in reuniting families and helping new citizens integrate into the work force. A New Democratic government will build a better Toronto by accelerating immigration process times so families can be reunited faster. And we will work with provinces, territories and stakeholders to streamline the recognition of foreign credentials, to ensure every New Canadian can fully participate in the economy.

Better transit, accessible child care, affordable housing, enabling new Canadians and help for small business—these just a few of the steps we will take to build a better Toronto and a stronger Canada.

My friends, in my 35 years of public life, I’ve learned a thing or two. In my time around the cabinet table, I’ve been front and centre for the difficult decisions that are made in government, day in and day out. Whether it’s meeting with premiers to work on the future of our federation or with world leaders to discuss global economic opportunities or terrorist threats, being prime minister is not an entry-level job. Over the coming weeks and months, we’ll invite Canadians to ask themselves: Which leader has the experience to defeat Stephen Harper and the plan to repair the damage he’s done?

Our offer to Toronto and to all of Canada is clear: a government that stands up for middle-class families and the cities in which they live, a government that grows the economy and creates stable, full-time jobs, while protecting the environment [and] where our youth get the opportunities they need and our seniors get the benefits they deserve. We will build a Canada, where democratic traditions are respected at home and our reputation as a country is respected abroad, where we replace fear and division with hope and optimism. A Canada where everyone belongs and no one is left behind. This is our offer, and this is the choice Canadians have in 2015.

My friends, we have a lot of hard work to do. We’ve got to roll up our sleeves and take our message to every corner of the GTA—from Oshawa to Oakville, from Scarborough to Streetsville, from Newmarket to the Toronto Islands.

Tell your neighbours that better transit is possible. Tell them quality, affordable child care is just an election away, that affordable housing, help for New Canadians and small business is within reach. And tell them that, beginning with just a handful more seats here in Toronto, the NDP can defeat Stephen Harper and build a better Toronto and a stronger Canada. Are you up for it? Then let’s get out there and build a better Toronto, a better GTA for all.

Thank you so much! Merci beaucoup.

FILED UNDER: FOR THE RECORD NDP Thomas Mulcair Toronto