Trudeau, Wynne announce grants of up to $102.4 million from governments for jobs and advanced manufacturing program 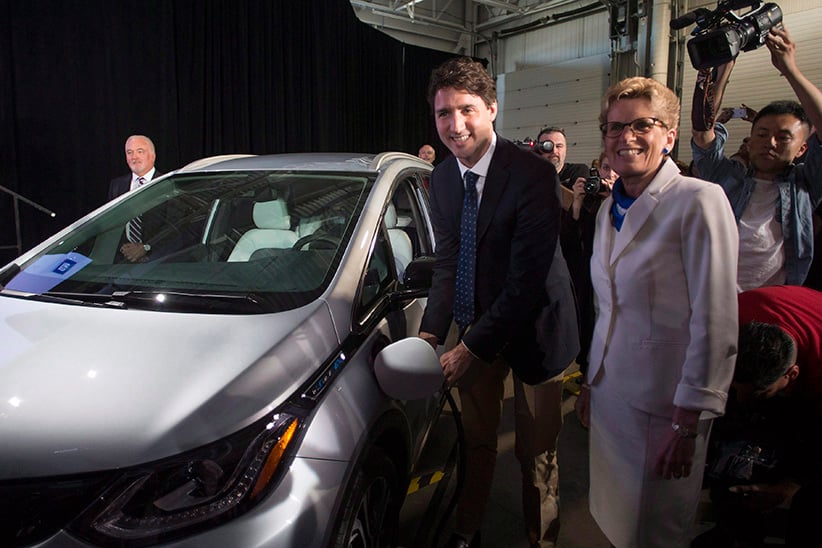 WINDSOR, Ont. – The federal and Ontario governments are each investing more than $100 million to support a $1-billion partnership with Ford Canada.

Prime Minister Justin Trudeau and Ontario Premier Kathleen Wynne are announcing the conditional grants of up to $102.4 million each at a Ford engine plant in Windsor, Ont.

The Ontario government says the investment will create 300 new jobs at Ford in the province and protect hundreds more.

The funding is also aimed at helping Ford establish an advanced manufacturing program that will transform the company’s power-train facility in Windsor.

It will also support Ford’s plan to create a research and engineering centre in Ottawa to develop new automotive technologies.

Wynne and Finance Minister Bill Morneau are also scheduled to visit the Vector Institute, a burgeoning facility in Toronto that’s widely pegged as the new international hub for AI innovation.

In recent months, the federal and Ontario governments have actively discussed major investments in the big automakers. Last December, one auto union leader estimated the combined public investments could reach hundreds of millions of dollars.

After the conclusion of labour negotiations last year, the auto companies launched talks with Ontario and Ottawa about investing in an industry critical to the both economies. The automotive sector employs about 125,000 people in assembly and parts production.

Earlier this year, Ottawa made changes to its Automotive Innovation Fund that enabled the government to provide grants to car companies. Before the changes, the program offered loans.

In its budget, the feds proposed to roll the two auto programs under a new, broader umbrella called the Strategic Innovation Fund, which will allocate $1.26 billion over five years.

The budget also announced $125 million for the launch of an artificial-intelligence strategy. It aims to leverage Canada’s already-significant expertise in AI, so the country can become a world leader in a field packed with economic potential.

The AI strategy will seek to strengthen collaboration between what Ottawa identified as Canada’s main centres of expertise: Edmonton, Montreal and the Toronto-Waterloo region.

Federal Economic Development Minister Navdeep Bains, who will also attend the Windsor announcement, has said the feds are open to helping the automakers expand their footprints in Canada.

He’s indicated a particular interest in investments that would support the more technologically advanced and research-focused areas of the auto industry.

Bains, in charge of overseeing Ottawa’s “innovation agenda,” has also said the government wants to make sure Canada is on the “cutting edge of the car of the future.”

Ford has said it would invest about $700 million at its Ontario facilities.