Forget Roy Moore: The Democrats' glass is actually half full

Moore has stained the GOP brand, and if the Dems can almost win in Alabama, they can win almost anywhere 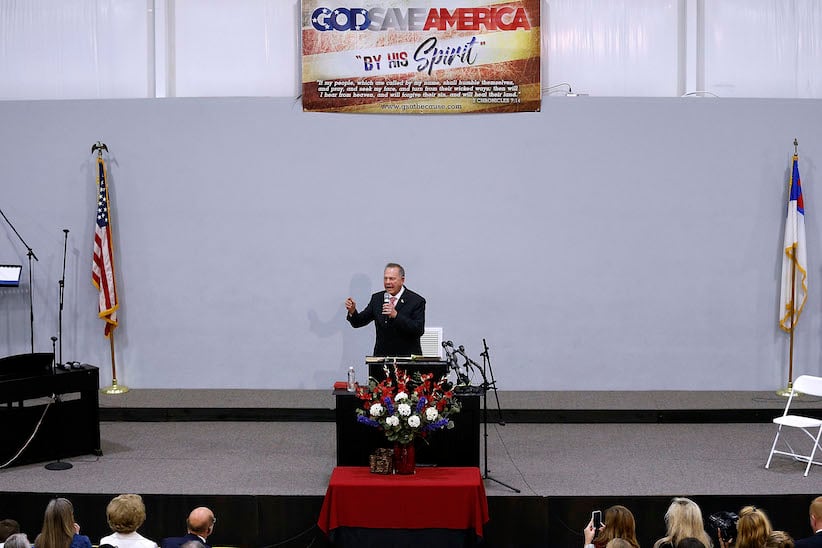 Moore speaks during a recent campaign event at the Walker Springs Road Baptist Church in Jackson, Ala. (Jonathan Bachman/Getty Images)

Tuesday could bring one final debasement to the United States’ year of presidential conspiracy-mongering; white supremacists finding their moment to seize; semiautomatic gun obsession wreaking tragedy on church-goers and country music fans; aggressive media-bashing and even literal bashing of a reporter into the ground. Given its long history, there have probably been worse homophobes or Islamophobes than Roy Moore in the U.S. Senate. But should he win the Alabama special election, the many accusations of teen predation against him must certainly put him in a unique category.

A victory for Moore has begun to seem more probable in the campaign’s final days, with several polls showing him with a narrow lead over Democrat candidate Doug Jones, ending a period when you might’ve assumed Alabamans would be sufficiently appalled by several women reporting the former judge pursued—and in one case, molested—them when he was in his 30s and they were too young to vote.

Yes, it will be depressing for many to watch this man ascend to the Senate if Moore does indeed grope victory from the jaws of defeat.

But it’s wrong to conclude that a Moore win signals that Donald Trump and his shameless crop of New Republicans are unstoppable, that voters would rather elect a Republican over a Democrat no matter where the former registers on the depravity meter. In fact, a narrow victory by Moore might please many Democratic strategists—at least the patient ones.

Alabama doesn’t do liberalism; political forecasters for decades have shaded its Deep South patch of the map deep red, and never had to reconsider. A Gallup survey ranks Alabama as the nation’s fifth-most conservative state, with 47 per cent of residents identifying as conservative and only 17 per cent liberal. (No state had fewer people than Alabama’s 31 per cent identifying as moderate.) Republicans have won the last few Senate races by 26, 27 and 31 percentage points—and last time nobody bothered running against Jeff Sessions, now Trump’s attorney general. Last time a Democratic presidential nominee cracked 40 per cent in the state, it was 2000 and the candidate was Al Gore, son of neighbouring Tennessee.

“The fact that Jones is running within a couple percentage points of Moore is itself pretty remarkable: Moore is performing around 25 points worse than Republicans ordinarily do in Alabama despite there being few swing voters in the state,” writes Nate Silver of FiveThirtyEight.

A loss in Alabama by Jones will be the latest in a string of tantalizingly close congressional contests this year to replace Trump cabinet picks, including a 3.6-point loss in Georgia and a 5.6 difference in Montana. But the swings away from Trump’s party have proven powerful enough in state legislature races to produce several Democrat pickups around the country—and Republican candidates have consistently underperformed Trump’s own results in those areas, suggesting he has corroded his party brand.

Even in Alabama, Trump’s star doesn’t shine as bright. The president’s approval rating in Alabama in the state is a lukewarm 55 per cent according to recent YouGov poll that showed Moore ahead, and 51 according to a Gravis poll showing Moore behind. His numbers are far worse in the country at large, but this is in a state where he bested Hillary Clinton 62-34 in the presidential election.

Other races in the 2018 midterms for Senate and the House of Representatives won’t feature as unseemly a GOP candidate as Roy Moore, so 25-point swings from red to blue won’t be common. Still, in generic congressional vote surveys, some polls have shown a double-digit lead for the Democrats nationwide. It’s given them hope in conservative places like Texas, Arizona, California’s Orange Country and upstate New York. It puts them well in the range of their vote share in 2006, the George W. Bush era’s post-Katrina midterm election, which flipped the House to the Democrats and presaged Barack Obama’s win two years later.

Take into account, as well, the potential damage a Senator Roy Moore has done in other jurisdictions. A Republican party that embraces him will be called predator-friendly in attack ads—fellow senators will do what they can to avoid being captured in photos with their duly elected colleague. And a man who has said homosexuality is “against nature” and that Islam is a “false religion” will be monitored incessantly for more utterances that bring shame to his party and opportunity for its rivals.

A defeat in Alabama will be a dispiriting defeat for Americans troubled by Trump, Moore and what Republicans now find acceptable in mainstream politics. There’s no denying that. But if Democrats can almost win there, they can win almost anywhere.