The referendum fights that once defined Quebec are dissolving, only to be replaced by something just as divisive 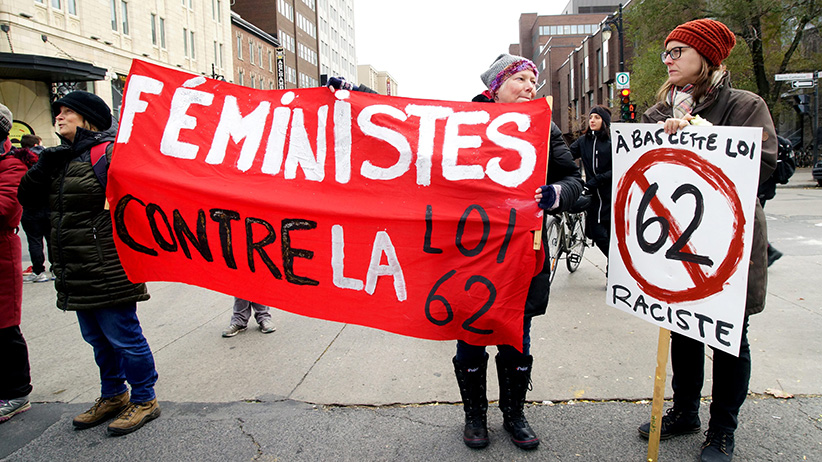 Participants in an anti-racism protest march in Montreal on Sunday, Nov. 12, 2017. (Mario Beauregard/CP)

The divisions that once defined Quebec are dissolving before the eyes of its oldest political parties. Less than a year before the next election, fear of another referendum—or desire for one—is no longer top of voters’ minds, challenging the raisons d’être of both the ruling federalist Liberals and their rivals, the separatist Parti Québécois. Freed from the old worries, though, Quebecers might soon be following the worldwide trend of right-left polarization, splitting along populist and progressive lines.

The Liberals were elected with a majority in 2014 after the PQ’s attempt to capitalize on Quebec’s decade-long identity debate with the Charter of Quebec Values. It will go down as one of the worst misplays in the province’s political history, says François Pétry, a Université Laval political scientist, because much as they like debating the value of state secularism, Quebecers are disturbed by the idea of fighting with each other.

Now, after three years of focusing on the province’s economy, and pulling it out of deficit, Premier Philippe Couillard is wading into that same territory. Bill 62, a new law banning face coverings while receiving public services, was championed by the Liberals, and is already subject to two court challenges.

READ: Why Quebec’s Bill 62 is an indefensible mess

It is drawing ire from all sides. Civil liberties advocates say it unfairly targets a tiny portion of Muslim women, while the nationalist opposition parties, Coalition Avenir Québec (CAQ) and the PQ, say it doesn’t go far enough. Premiers across the country have denounced it and Prime Minister Justin Trudeau has said the federal government is studying legal ways it could join the chorus. “It’s not a good initiative, purely on the electoral front,” Pétry says, adding the law figured nowhere in the Liberals’ election platform. “If you start to create conflicts between Quebecers, [you’re] probably going to suffer the consequences.”

It’s one of the few mistakes Couillard has made, according to Pétry, who tracks politicians’ promises and says Couillard has kept more of his than any premier in recent Quebec history. That and the government’s strong fiscal performance makes the Liberals’ recent slump in the polls a paradox. The most recent by Leger, published in October, had the Liberals running second to the four-year-old, right-of-centre CAQ on the question of voting intentions, with 29 per cent support compared to 34 per cent for the CAQ.

Couillard may be paying, says Pétry, for ethics blunders made by the party under its former leader, Jean Charest, which have tainted how voters view the party. What’s more, the Liberals have been in power since 2003, save for a two-year stint by the PQ under Pauline Marois, leaving many antsy for change.

“For the first time in 40 years, a party other than the PQ and the PLQ could be in power, and that’s a real feat,” says Dan Pelletier, a 45-year-old Laval security guard who plans to vote CAQ in the next election. Pelletier says he’s for legislation like Bill 62, as long as it’s done “with respect for the [minority] communities that live with us, without becoming authoritarian.”

Still, the CAQ, which has been criticized for sowing us-versus-them political division, has vowed to enact even further-reaching religious attire legislation, which would put Quebec at greater odds with the rest of the country. It’s a prospect that worries Emilie Nicolas, co-founder of Québec Inclusif and a Ph.D. candidate in anthropology at the University of Toronto, who says Quebec has seen “a progressive normalization of distrust of Muslim communities” since the early 2000s.

Discussions surrounding religious accommodations have long been placed in the context of Quebec’s separating of church and state in the 1960s. Some say that watershed moment can no longer be used to explain Quebec’s unease with those different from its French settlers. “In this day and age no society is an island,” says Arjun Tremblay, a postdoctoral fellow at the Université du Québec à Montréal who studies the politics of multiculturalism. He doubts any Quebec leader can steer clear of addressing identity for long—it “strikes an emotional chord in a lot of people,” he says, “and can be used to mobilize segments of the electorate.”

Tremblay, like others, points to the Trump administration’s “thinly veiled anti-Muslim” immigration and refugee bans. A far-right movement is gaining ground in the province, especially in Quebec City, where less than a year ago a mass shooting at a mosque left six dead and 19 seriously injured. The suspect, 27-year-old Alexandre Bissonnette, was said to have an affinity for Trump and the white nationalist groups supporting him.

The attack fuelled calls for the Quebec government to launch a formal commission looking into systemic racism in the province. But a month after it launched, Couillard changed its focus and name, ridding it of terms of reference relating to systemic racism in favour of vaguer language on discrimination and integrating immigrants. Nicolas says the move, compounded by Bill 62, shows how out of touch Quebec politicians are with the appetite among young voters to address social justice issues. “Millennials are not that young anymore,” she says, “and it turns out that they can vote if they feel like it makes a difference.”

Case in point: the Nov. 5 election of Valérie Plante, the first woman voted mayor of Montreal, who ran on a platform of progressive politics and on her independence from the political establishment. Her cheery demeanour helped. Plante’s predecessor, Denis Coderre, a former Liberal MP and cabinet minister, was seen as arrogant. Quebec’s main parties may be driven and divided by 1990s politics, Nicolas says, but that’s changing, “actually as we speak.”

Whether the Liberals find a way to renew themselves or dig deeper into old debates will determine how they do come October 2018, she predicts. Either way, the old guard remains in place and has 11 months to pick up the pieces. And if there’s one thing the experts agree on, it’s that 11 months in politics is a long time.