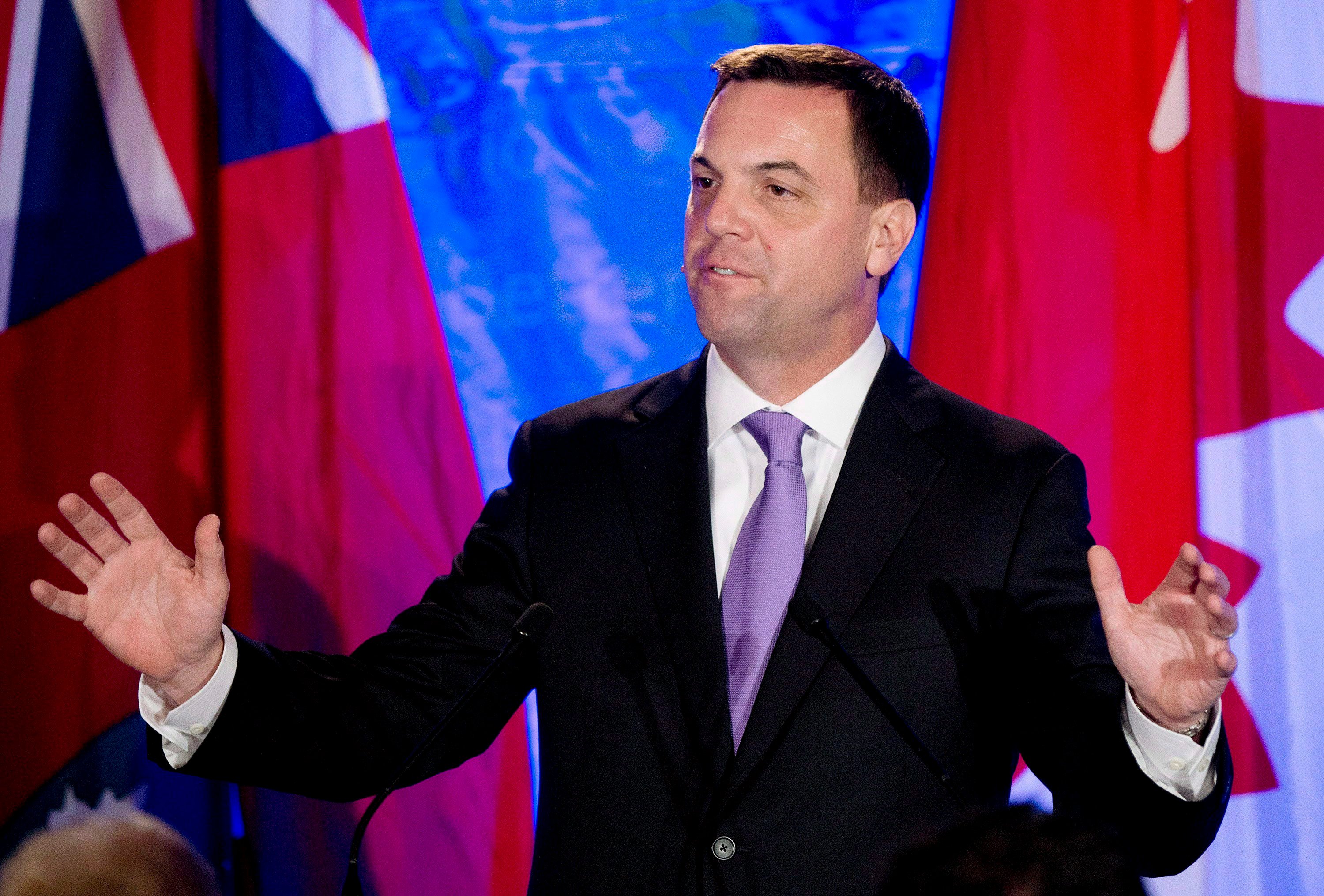 Ontario Progressive Conservative leader Tim Hudak announces that he will be stepping down as party leader after being defeated at his election night campaign head quarters in Grimsby, Ont., on Thursday, June 12, 2014. Hudak will resign his seat in the legislature next month and become CEO of the Ontario Real Estate Association. THE CANADIAN PRESS/Nathan Denette

TORONTO – Politicians of all stripes praised Tim Hudak on Tuesday after the former Progressive Conservative leader announced he’s quitting the legislature to become CEO of the Ontario Real Estate Association.

Hudak was first elected at age 27 in the Mike Harris-led Tory sweep that defeated the one-term New Democrat government of Bob Rae in 1995.

Four years later he found himself at the cabinet table as minister of tourism and then minister of consumer and business services.

“I ran because I believed the province desperately needed change and I wanted to make a difference,” Hudak said in a statement announcing his resignation as the MPP for Niagara West-Glanbrook effective Sept. 16.

“Every step along the way I have been guided by a clear sense of purpose: smaller more focused government, a strong economy and greater opportunity for all.”

His wife, Deb Hutton, was a senior adviser to Harris when the two met and married.

Hudak, 48, was elected PC leader in 2009, but failed to defeat the Liberal government in the 2011 and 2014 elections, even though the Conservatives had big leads in public opinion polls heading into each campaign.

He came under widespread criticism even from many Conservatives in the 2014 campaign when he promised to fire 100,000 public sector workers if the Tories got elected, an issue many blamed for their defeat.

Hudak emerged as a stronger MPP after stepping down as leader following the 2014 defeat, championing the sharing economy and more liberalized liquor laws, but never seemed to see eye-to-eye with new PC Leader Patrick Brown.

He’s also been hosting a radio talk show on weekends that is syndicated in several Ontario cities.

“These past 21 years have been tremendously rewarding, and I will miss my colleagues in all three parties,” Hudak said. “I want to thank all of them, past and present, for their friendship, leadership and advice.”

Brown issued a statement thanking Hudak for his public service.

“I was moved by his compassionate and emotional speech in the legislature in opposition to the Liberal government’s callous cuts to autism therapy,” said Brown.

Premier Kathleen Wynne said she congratulated Hudak on his new job when the two spoke on the phone Tuesday morning.

“As a member of the legislature, a cabinet minister, party leader and vocal champion for the people of his community, Tim has always served with passion and with purpose,” said Wynne. “It is a record he can reflect proudly upon.”

NDP Leader Andrea Horwath praised Hudak for “his sharp wit and his keen sense of humour” in the legislature.

“While Tim will be the first to agree that we rarely saw eye to eye on matters of policy, I have nothing but respect for his commitment to his constituents in Niagara West-Glanbrook and to his party during his time as leader,” said Horwath.

Wynne has six months after Hudak resigns to call a byelection in his riding. There is also a vacancy in the Ottawa-Vanier riding created when former attorney general Madeleine Meilleur resigned in June, and that vote must be called by December.

There is already a byelection set for Sept. 1 in Scarborough-Rouge River to replace former Liberal MPP Bas Balkissoon, who quit suddenly last March with no explanation.