Battleground Quebec: The Bloc is back

Why winning seats in Quebec won’t be easy for anyone. 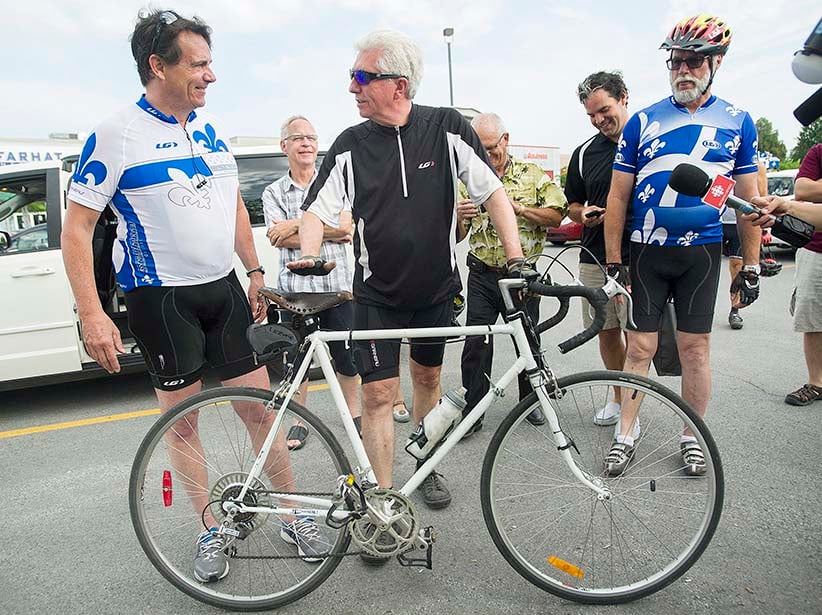 If there’s an unwritten rule about older men campaigning in Spandex—and there really should be—then Gilles Duceppe broke it repeatedly before the October election became a reality. On a recent Wednesday, four days before Stephen Harper consecrated one of the longest election periods in this country’s history, the 68-year-old Bloc Québécois leader donned a black-and-white cycling shirt and matching form-fitting trunks for a three-day, 140-km pedal through Quebec’s heartland.

With Parti Québécois Leader Pierre Karl Péladeau at his side (he preferred fleur-de-lys blue), Duceppe stopped at roadside vegetable kiosks, depanneurs and restaurants, chatting with locals as cameras clicked. Days later, he chided Harper for “ruining our summer” by calling an election in August.

One might forgive Duceppe for his chutzpah, if not his choice of clothing. Four years after its historical collapse in the 2011 election, the Bloc is struggling to become the fourth player in what is emerging as a three-way race in Quebec.

With limited resources and a distinct lack of visibility over the last four years, the Bloc must depend largely on Duceppe’s personal popularity to regain the Quebecers’ electoral favour. The party raised less than $80,000 in the first six months of 2015, according to an analysis of Elections Canada data; the NDP, the Bloc’s closest ideological rival, has raised nearly four times that.

Both the Liberals and the Conservatives can expect to hang onto their respective fiefdoms; the former on the island of Montreal, the latter in the swath of territory in and around Quebec City.

Related: The renewed militancy of the Bloc Québécois

All three parties have a formidable foe in the NDP, which won 59 of Quebec’s 75 seats in the 2011 election (the province will have three more ridings in the next election). The party’s relatively young Quebec caucus defied expectations simply by avoiding embarrassment, while NDP Leader Thomas Mulcair remains far and away the most popular federal leader in Quebec. The stakes are considerable for the party: It must retain nearly all its Quebec seats to have a viable shot at gaining power.

The party has gained a luxury once enjoyed by the Bloc Québécois: entrenchment. Consider, for example, the size of party staff. In 2008, the NDP set up its first Quebec-based headquarters, with a staff of about 15 for the entire province—and none for the candidates themselves.

Today, the party has an additional 15 staff in five “mini-headquarters” around the province, and an average of three personnel for each of its 78 candidates, for a total of 264. Unlike 2008 and 2011, the NDP also has the embarrassment of choice: In the riding of Westmount, for example, there are eight people vying for the candidacy to take on Liberal Marc Garneau. (The nomination is Aug. 16.) Meanwhile, three NDP incumbents in Quebec lost their seats to challenges, suggesting there is little tolerance for deadwood within the NDP caucus.

Related: Read our election profiles on British Columbia and the heartland provinces

The Conservative party, meanwhile, hopes to make gains in the Montreal area, where it has never had an elected MP. Harper kicked off the campaign in the riding of Mont-Royal, a Liberal stronghold for 75 years, represented by Pierre Trudeau for nearly three decades. As a wealthy, traditionally anglophone riding, it would seem an odd venue for Harper to launch a campaign for the hearts of the overwhelmingly francophone province.

Yet the Harper team cannily transformed the Ben Weider Jewish Community Centre into a deep-blue backdrop for the Prime Minister, setting the camera angles to reflect the gigantic Quebec flag, at the expense of the equally large Canadian flag beside it. Harper addressed Mount Royal’s older, strongly federalist audience, one not averse to voting for Mount Royal Conservative candidate Robert Libman, a former anglophone-rights lawyer. To a television viewer, Harper could have been in any of Quebec’s nationalist redoubts beyond the island of Montreal.

His speech gave an indication of the Conservative’s electoral strategy. Notably, Harper didn’t once mention Libman in his speech, delivered mostly in French. Instead, he paid tribute to the “great Quebec nation,” and how “Quebec nationalism that doesn’t lead to the dead end of separatism isn’t a threat.” This is a targeted play for the small-c conservatives for whom the Bloc is too lefty and the Liberals are too federalist. (For these voters, the NDP is straight-up pinko.)

Despite being written off following the 2008 election, when Harper’s attempted charm offensive netted a paltry 10 seats, the Conservatives haven’t given up on Quebec: Harper has visited the province 49 times since the 2011 election.

Quebec has been a mixed bag for Justin Trudeau’s Liberals of late. The party, which has only seven Quebec MPs in its caucus, raised nearly $750,000 in Quebec in the first half of 2015, according to an analysis of Elections Canada data—more than the Conservative and NDP provincial fundraising tallies combined. The coming of Trudeau has apparently buoyed the party’s volunteer rolls. There are 10,000 giving their time to the Liberal cause in Quebec—three times the 2011 number, according to Liberal national campaign co-chair Dan Gagnier.

The party is also attempting to move beyond its traditional base of Montreal, where much of the province’s immigrant population lives. “We’ve been doing door-to-door campaigning in Quebec City for four months. We certainly weren’t doing that in 2011,” says chief Quebec organizer Claude-Éric Gagné. And, unlike in 2011, most Liberal candidates have raised the minimum $50,000 in campaign funds, according to Gagné.

Related: Paul Wells on how to fit in and stand out in Quebec

For the Liberals, the trouble is twofold. First, several Liberal organizers have complained that, under Trudeau, the party has become Ontario-centric, neutering the Quebec wing’s traditional autonomy. Yves Malette, the party’s chief of operations in Quebec, left the party in a huff last fall, claiming in a letter obtained by Maclean’s that party resources “were insufficient to properly do the work necessary across Quebec to prepare for an election.”

The other issue for the Liberals isn’t unique to Quebec—though it’s more pronounced. Mulcair remains the go-to federal leader for the province’s progressive types, of which there are many. Many supporters of the left-tilting (and nominally sovereignist) provincial party, Québec solidaire, have supported the NDP. Trudeau all but shut the door on this potential support when the Liberals supported C-51, the anti-terrorism legislation.

More so than in previous years, many sovereignists have criticized the Bloc and Duceppe for splitting the progressive vote and, therefore, increasing the likelihood of Harper’s return. It points to a developing theme: Stripped of its 25-year title as Quebec’s reigning protest party, the Bloc Québécois will likely play the role of spoiler in the 2015 election. In a handful of east-end Montreal ridings, and in far-flung seats such as Gaspésie-Îles-de-la-Madeleine, this will almost certainly be the case. Even in its apparent march toward political extinction, the Bloc is hardly a spent force in its native land.