Image of the Week: Yes, the Quebec premier literally performed the gesture during an availability where he implied his preference for Erin O'Toole 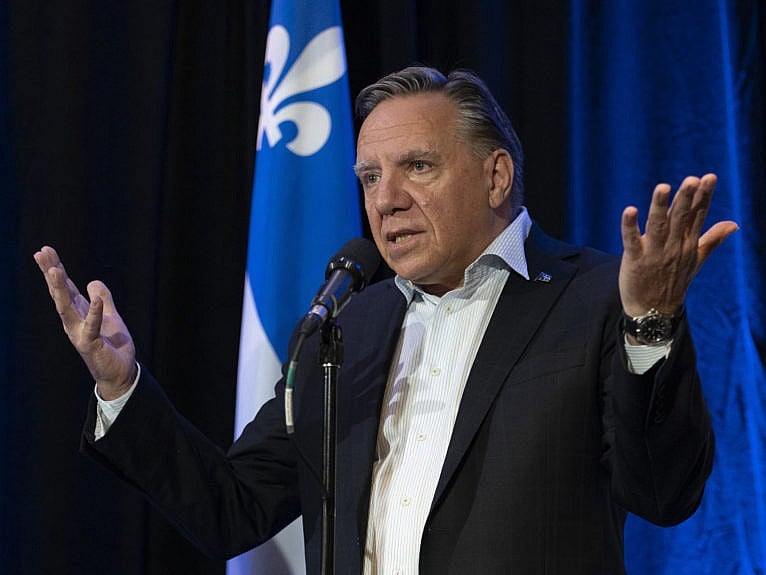 For months now, Quebec Premier François Legault has enjoyed the highest average approval rating of any provincial leader. His secret isn’t really a secret: he’s remained staunchly committed to Quebec nationalism and has zero regard for what the Prime Minister thinks of him. It was pure Legault on display on Thursday morning, hours after the national French-language debate, when he re-asserted his nationalist pride. “There are three parties—the Liberal party, the NDP and Greens—who want to give us less autonomy,” he declared. “I find that dangerous.” What about Erin O’Toole’s Conservatives, who have been desperately trying to gain a foothold in Quebec, and who have promised more unconditional cash transfers to the province? “For the Quebec nation, Mr. O’Toole’s approach is a good one,” Legault said. In doing so, he skirted the issue of the $6-billion cheque the Liberals are prepared to hand over as part of the party’s national childcare plan, which O’Toole might cancel. On that, Legault let the Tory off comparatively easily: “I think Mr. O’Toole should explain himself.” If his comments are interpreted as an implicit endorsement of the Conservatives, Legault’s statement is a slap in the face to the province’s polling frontrunners, the Justin Trudeau’s Liberals and the Bloc Quebecois, led by Yves-François Blanchet: both have spent plenty of time arguing on national TV over who is more Quebecois. Legault knows his province will be critical to the electoral outcome, and he’s prepared for any outcome. But he’s got his preferences. With the true Gallic shrug you see above, he made his opinions clear. And if Trudeau does get re-elected, next time the two men cross paths, Legault may just give the shrug again.