Free trade? Canada and the U.S. keep fighting about steel

Oct. 12: There may be a new continental trade deal on the table, but mutual steel and aluminum tariffs won't just disappear 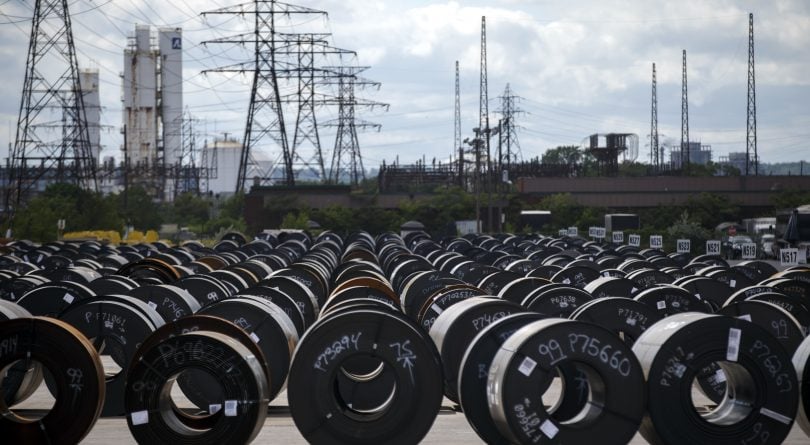 The last time most Canadians heard from Wang Yi, China’s foreign minister, he was berating a Canadian journalist for asking an “irresponsible” question about his country’s human rights record as Canada’s then-foreign minister Stéphane Dion looked on smiling. Wang is back with another tsk-tsk message for Dion’s successor, Chrystia Freeland, after Canada appeared to give the U.S. a veto over any future Canada-China free trade deal. “China is opposed to all sorts of protectionism and to double-standard practices under all kinds of names,” Wang reportedly told Freeland. “Any attempts that aim to sabotage China’s modernization plan will fail.” (Globe and Mail)

The pair spoke on Wednesday when Freeland called Wang to assure him that Canada would make up its own mind about any trade deal. China is urging Canada to return to the negotiating table. Prime Minister Justin Trudeau has repeatedly said Canada needs to diversify its exports and lessen its dependence on the U.S., and China is an obvious target. So how to do that without running afoul of Washington?

In an op-ed for Maclean’s, Edward Greenspon and Kevin Lynch, co-chairs of the Public Policy Forum’s Consultative Forum on China argue not to try hammering out a full-blown trade deal. Instead, Canada should pursue something akin to the old Canada-U.S. Auto Pact, a sectoral agreement: “The sectoral option gives us a better chance of making quick gains than an extended free-trade negotiation. It also remains onside the USMCA’s intrusive language. And should the political winds change, we have a base from which to expand.” (Maclean’s)

Meanwhile, talks between Canada and the U.S. to lift steel and aluminum tariffs aren’t going well, with Canada refusing to agree to Washington’s demand for strict quotas. Citing a source close to the talks on metal quotas, Reuters reports the export limit the U.S. is seeking on aluminum would cause investment in the Canadian industry to tank: “It was so unacceptable that the discussions just ended before they began.” With the talks stalled, the Trudeau government announced it will impose new limits and duties on a variety of steel imports. (Global News)

The Supreme Court ruled governments don’t have an obligation to consult with Indigenous people before drafting laws. The Mikisew Cree First Nation in Alberta had argued that the former Harper government’s 2012 omnibus budget bill impacted its treaty rights by amending regulations for the protection of waterways and the environment. (CBC News)

Writes Pam Palmater, a Mi’kmaw lawyer and professor: “The duty to consult is one of those legal obligations which binds the Crown—both federal and provincial governments—to consult, accommodate, as where appropriate, obtain the consent of First Nations prior to taking any action that they know might impact Aboriginal and treaty rights and title. In one fell swoop, the Supreme Court has gutted the duty to consult, creating not only a major gap in section 35 protection of rights, but an easy backdoor for governments to, once again, run roughshod over Aboriginal rights.” (Maclean’s)

Good news, pot workers and investors. You can travel to the U.S. free(er) from the fear that you’ll be turned away at the border. From the U.S. border agency statement: “A Canadian citizen working in or facilitating the proliferation of the legal marijuana industry in Canada, coming to the U.S. for reasons unrelated to the marijuana industry will generally be admissible to the U.S.” Pot heads foolish enough to admit it, you’re still out of luck. (Canadian Press, U.S. Customs and Border Protection)

Only fools, cranks or politicians can ignore the scientific consensus around global warming and the urgent need to address it, writes Stephen Maher, a week after Ontario Premier Doug Ford joined United Conservative Party leader Jason Kenney to rally against carbon taxes:

Conservative politicians are telling people that the rascals in power are trying to pick their pockets, asking them to pay an unfair price. That’s good politics, except that it is in conflict with the facts, which are clear and do not make allowances for the tender feelings of the snowflakes who refuse to accept that we are going to have to change the way we do things. We have to cut emissions or we will destroy the planet. The facts don’t care about your feelings. (Maclean’s)