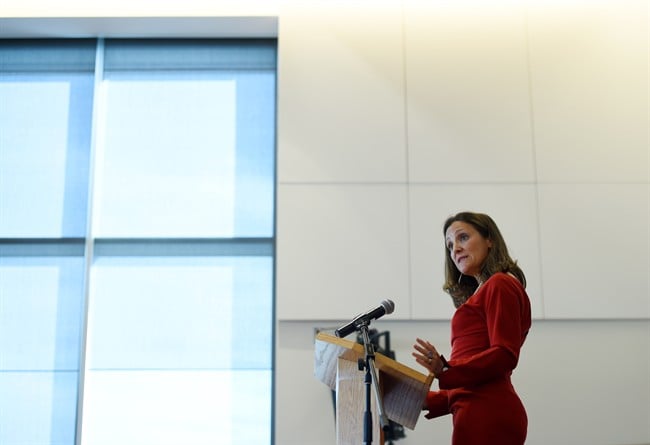 “In all these discussions, we will come to the table with goodwill, and Canada’s characteristic ability and willingness to seek compromise and find win-win solutions,” she said.

“But we are committed to a good deal, not just any deal.”

She is also calling for new “progressive” elements in NAFTA 2.0: stronger labour standards, tougher environmental protection provisions as well as chapters on gender and Indigenous rights.

On that front, Canadian negotiators plan to use Canada’s recently negotiated trade agreement with the European Union as a reference, Freeland said.

“Progressive elements are also important if you want a free-trade deal that’s also a fair-trade deal,” Freeland said in a question-and-answer session following the speech at University of Ottawa.

Ottawa also aims to cut down on bureaucracy, harmonize regulations to ease the flow of cross-border business, push for more mobility for professionals and free up the market for government procurement, she told her audience.

Canada’s positions will also include work to maintain key elements of the 23-year-old deal, including the process to ensure anti-dumping and countervailing duties are only applied when truly warranted.

Ottawa’s negotiating team will sit down with their American and Mexican counterparts Wednesday in Washington for the first round of talks.

During the question and answer session, Freeland said she believes Canada and its NAFTA partners can find common ground on new chapters for labour, the environment, gender and Indigenous rights.

But she also warned that Canadians should brace for some tense exchanges during the NAFTA talks, in general.

“I think we all do need to be prepared for some moments of drama,” she said. “We should just see that as an expected part of any trade negotiations.”

FILED UNDER: a mandate by any other name Chrystia Freeland NAFTA