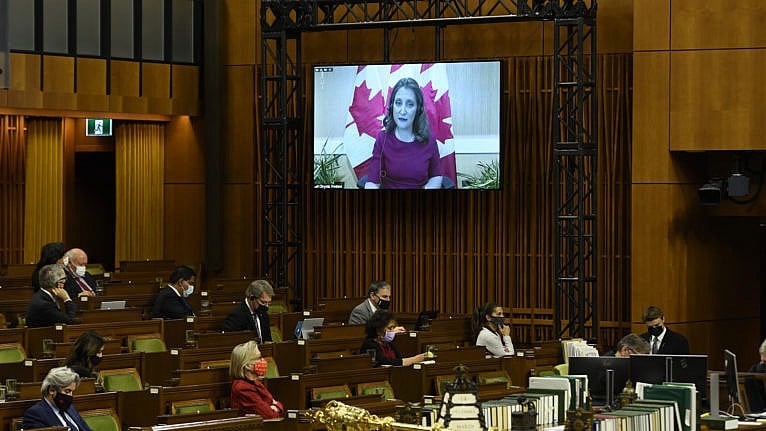 Freeland is seen via videoconference as she presents a fiscal update in the House of Commons on Parliament Hill in Ottawa, Dec. 14, 2021. (Justin Tang/The Canadian Press)

The update says it is a time of economic uncertainty because of the pandemic:  “The path forward will depend on a number of tailwinds and headwinds, which could either bolster the recovery or push it off course.”

The update is notable for what it does not include, the Globe writes.

It is primarily an update of federal spending and revenue projections and does not mention many of new spending promises made in this year’s Liberal Party election platform. Those promises added up to $78-billion over five years.  For instance, the update makes no mention of a platform pledge to impose a 3-per-cent surtax on bank and insurance companies with profits of more than $1-billion and to introduce a fee on financial services companies, which it called the “Canada Recovery Dividend.”

The update finds the books in somewhat better shape than expected. The budget had predicted “the debt-to-GDP ratio would peak at 51.2 per cent this fiscal year, up from pre-pandemic levels of about 31 per cent. Tuesday’s forecast says it will peak this year at 48 per cent, before declining gradually to 44 per cent by the 2026-27 fiscal year.”

Freeland isolated: It was telling, writes Heather Scoffield in the Star, that Freeland had to deliver her update from isolation.

Rapid testing had just indicated that two of her staff had tested positive for COVID-19, and suddenly the entire office, including the minister, had to take steps to isolate — but keep on doing their jobs by turning to all the workarounds we have developed over the past 21 months. Freeland’s first post-election fiscal reveal is all about enabling that pattern economy-wide — dedicating billions to keeping the trains running on time despite the lightning speed at which Omicron is disrupting our lives.

Too much: In the Post, John Ivison writes that it’s still too much spending, and wonders if the federal government should be spending so much on Indigenous child welfare.

First ministers talk: Justin Trudeau was to speak with the premiers last night to discuss the possibility of stricter public health measures in response to omicron, CBC reports.

CBC says officials are considering more travel restrictions. The Globe reports the feds want to revive its advisory against non-essential international travel. An announcement of new measures, including the possibility of a ban on entry by foreign nationals, is expected to be announced today.

Getting ready: In Maclean’s, Patricia Treble has some sobering news about omicron, which looks likely to cut a swatch through Canada as it has in Europe. Dr. Andrew Morris says Canada could have done more to get ready.

Morris cites two big mistakes by Canadian governments in the past two months: minimizing the benefits of third dose; and what he calls a “silly strategy” of delaying rollouts of third doses until they saw evidence in this country of waning immunity from two doses of vaccine, even though there was evidence from around the world that such waning would hit us.  “Those errors have led us to where we are today,” he says. “There was zero benefit to waiting; now they have zero capacity to roll out immunizations.”

Living with COVID: In Le Journal de Montréal, Emmanuelle Latraverse writes that (translation) we now have to live with COVID, because there is no appetite for more lockdowns.

This is living with COVID. Wear a mask in public, administer third doses at full speed. And accept the risk. The alternative is fear, isolation, withdrawal. And that is no longer possible, neither humanly nor economically.

Singh changes tune: Jagmeet Singh said Tuesday he would support federal intervention in a court challenge to Bill 21, which bans public-sector workers from wearing religious symbols on the job, CP reports. Singh said he changed his position after a teacher in Chelsea was reassigned from teaching because she wears a hijab.

Notwithstanding: In the Star, Althia Raj has an interesting column on the implications of the more frequent use of the notwithstanding clause, which allows provinces to override the Charter of Rights and Freedoms, as Francois Legault has done with Bill 21.  Montreal Liberal MP Anthony Housefather thinks legal scholars and MPs should consider whether its use is appropriate.

Arctic changing: This year’s Arctic Report Card finds that the transformation of the Arctic is both “rapid and pronounced,” the Globe reports.

It includes long-observed effects such as reductions in sea ice and snow cover, retreating glaciers and thawing permafrost. Other, more recently observed phenomena range from a proliferation of woody shrubs and beaver dams across the tundra to a Bering Strait awash in marine garbage due to increased shipping traffic. “As the Arctic transforms, science in some cases is running to keep up,” the authors write.

Enough boosters: In an end-of-year interview with CTV’s Evan Solomon, Trudeau said that the government has acquired enough boosters for everyone.