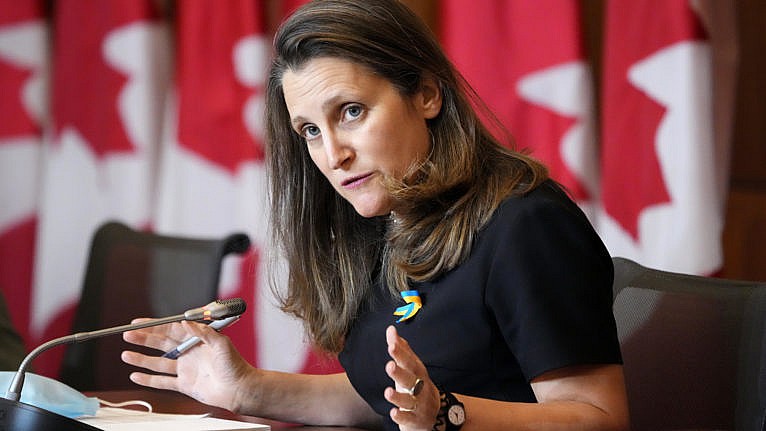 Freeland vs. Poilievre: Not far away, in a speech to the Empire Club, Chrystia Freeland took aim at Pierre Poilievre, denouncing his critiques as “economically illiterate” the Star reports, giving Canadians a taste “of what a head-to-head political fight between two people believed to want the country’s top political job—the post of prime minister—would look like.”

“At this time of global economic and political volatility, undermining Canada’s fundamental institutions — very much including the Bank of Canada — is highly irresponsible, not to mention economically illiterate,” Freeland told the Bay Street audience.

Freeland said that “while fighting inflation is the central bank’s job, good government policy can make it easier by tackling the supply constraints which are driving the rise in prices.” Asked later if she meant Poilievre in particular, Freeland said only “I said exactly what I meant to say in my speech.”

The Globe has a story outlining the measures Freeland was in town to tout to cope with rising inflation.

Breaches: Ottawa is facing calls to respond to a growing number of privacy breaches involving military members who experienced sexual misconduct, CP reports. The personal details of more than 100 current and former Armed Forces members have been leaked through 20 different privacy breaches since February.

No mandates: The House of Commons is suspending COVID-19 vaccine mandates for MPs, staff and visitors next week, CP reports.

DND responsible: The military says the office of Gov. Gen. Mary Simon had no role in decisions related to a catering bill for a recent trip, CBC reports.

Dental mystery: Although the clock is ticking on its promise to the NDP to deliver a dental care program, the Liberals still appear to be in the consultation phase and haven’t figured out what form will this program take, CP reports.

Little appetite: Philippe J. Fournier has an interesting piece in L’actualité on a recent Mainstreet poll that shows that most Quebecers continue to have little appetite for independence.

Albertan women: After the announcement Wednesday that Michelle Rempel Garner is considering entering the UCP leadership race, Kelly Cryderman has a piece in the Globe pointing out that the most interesting candidates in that race are women.

Optimistic targets: Konrad Yakabuski, writing in the Globe, believes that Ottawa’s targets for greenhouse-gas emissions for the oil and gas sector hinge on hopes and miracles, given the  health of the industry

The emissions-reduction plan was many months in the making and mostly formulated before Russia’s invasion of Ukraine and the paradigm shift in energy markets that the war engendered. If Ottawa had been counting on weak oil prices in the future to drive many oil-sands projects out of business, geopolitical factors now have analysts predicting high prices for many years to come.

Confidence question: In Star, Susan Delacourt argues that the Trudeau government needs to find a way to get out of the corner it is in on the question of how and why it decided to invoke the Emergencies Act.

That’s where we are again. The government is going to great lengths to say it didn’t give orders to or take instruction from the police. The police are doing the same. So instead, we’re getting all kinds of evasive, even glib remarks about tools and processes and the difference between advising and consulting, all thrown into the blander-izing machine of communication spin. Enough.

Whole-of-government incompetence: Tom Mulcair has a blistering column at CTV, making a broad critique of the Trudeau government as rudderless, drawing together a smorgasbord of scandals and failures and laying them all at Trudeau’s feet.

Our whole system is supposed to be based on ministerial responsibility. You’re answerable to Parliament and the public for your decisions and your performance. Why is it that none of these ministers is ever responsible? The answer is in the PMO. Jet-setting with the Aga Khan in flagrant violation of ethics laws? So what? Break the law again by sticking your nose in the prosecution of a major company with deep Liberal connections? Nobody’s perfect!

This will be fun: Toronto and Vancouver will host 2026 World Cup games, but Edmonton will not, CTV reports.