From singing country to stumping for the Tories in Central Nova

In a riding that expects its MPs to deliver, George Canyon battles the knock that, politically speaking, he's all hat and no ranch 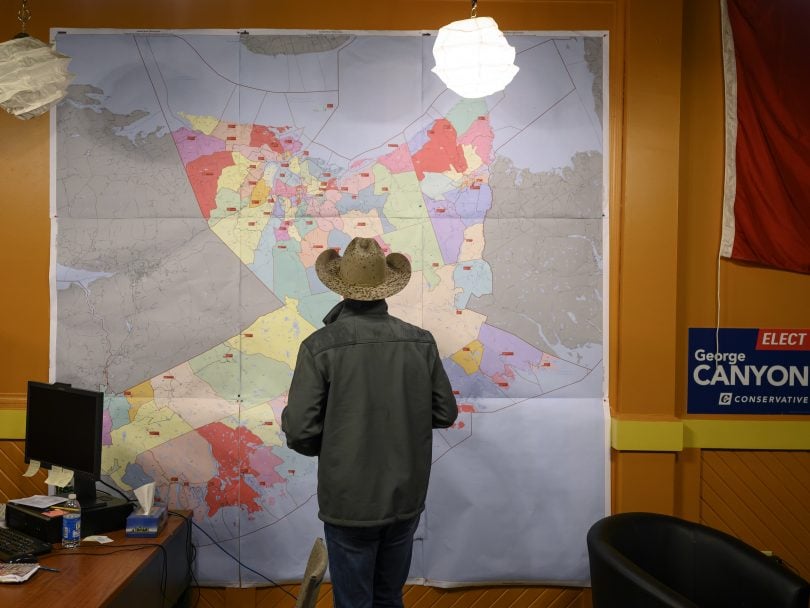 “Should I wear the hat?” George Canyon wonders aloud as he prepares to go door-knocking on a street in New Glasgow, N.S.

Whether to don his trademark Stetson is an ongoing conundrum for the country music star as the newly-minted Conservative candidate in the rural riding of Central Nova. But the real question is: what do rural Nova Scotians think of one of their own using his star power as he vies to be their voice in Parliament?

“I’m not doing this for fame or fortune,” Canyon says over a bowl of chicken soup in a near-empty pub. “I’m doing it because I want to serve friends and family, by the grace of the good Lord, and hard work.”

Canyon is instantly recognizable in the brown hat as the Marlboro man of country and western, who lights up stages with hits like “I Got This.” Without it, he’s the guy born and raised as Fred Lays on a country road outside New Glasgow, who worked as a handyman at the local hospital, volunteered as a fireman and played music in the pubs. That was before he got his big break and moved to Alberta.

On this Tuesday afternoon, he’s not sure which way to go and, with his campaign manager out of sight, he ponders the question of his hat. His campaign slogan, emblazoned on the side of his van, seems to suggest he go bareheaded: “The Hat’s off. Let’s get to work.”

Earlier in the day he admits to being chastised by a constituent for changing his name. He’s also been openly criticized for being on tour during part of the campaign, a commitment he says he made prior to running for office.

But on this day, he embraces the identity that’s been raising eyebrows in a province that voted solidly Liberal in the 2015 election: “Let’s get the hat out,” he says. “It all happens with the hat.”

Canyon strides to the door and before he’s close enough to knock, a young man in a Patagonia ball cap emerges with an outstretched hand: “How’s it going? Nice to meet you George,” the man says before Canyon has the chance to introduce himself.

Boudreau, a 24-year-old industrial electrician, is home in the middle of the week because he works in northern Manitoba, two weeks on, two weeks back in Nova Scotia. “It would be nice to work around here,” Boudreau says, good-naturedly. 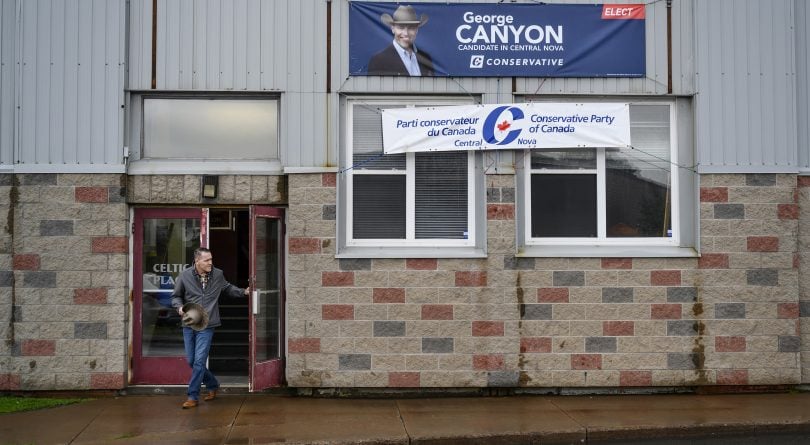 Canyon says all the right things, promising to increase economic growth in Central Nova, a riding which spans the Halifax Stanfield International Airport through to Antigonish and the sparsely populated eastern shore. Blue collar, rural and traditionally Tory-land, the riding switched in 2015, part of the Liberal takeover in Atlantic Canada. Prior to that, it was occupied by Conservative heavy hitters Brian Mulroney from 1983 to ’84, Elmer MacKay and later his son Peter Mackay, who George refers to as a mentor.

He is up against Liberal incumbent Sean Fraser, a lawyer who also moved home from Calgary to run for office, and both have a good shot at going to Parliament, according to the poll aggregator 338Canada. At the time of writing the riding was a toss-up with the Liberals slightly ahead (39.8 per cent) of the Conservatives (36.9  per cent.)

Betsey MacDonald, a local community organizer and activist is running for the NDP. Barry Randle, a small business owner, represents the Green Party of Canada.

Fraser admits it’s “certainly a bit odd” to run against a local celebrity, but it doesn’t change his approach: “We respond not to the candidate but to the constituents.

“We know that we’ve got a plan that responds to the issues that people raise with us,” he adds referring to access to health care, cost of living and protecting the environment.

The environment could be the issue that trips Canyon up. The unfolding question of the Northern Pulp mill in Pictou is the biggest, most contentious issue in the riding. For more than 50 years, Northern Pulp has dumped effluent into nearby Boat Harbour on the doorstep of a First Nations reserve but has been ordered by the province to stop by Jan. 31, 2020. Hundreds of jobs are at stake and the focus has turned to a controversial plan to instead pump it near fertile fishing grounds in the Northumberland Strait.

While Fraser said recently he’s opposed to the new plan to pump treated effluent into the strait, Canyon hadn’t taken a position, saying he was “educating” himself about the issue.

But even as he brushes up, the granite-jawed singer faces attacks suggesting he’s unqualified to navigate such difficult issues. “YEEE HAAAWWW it’s George Canyon. Come meet George and his Big Hat,” wrote one commenter on the Central Nova Conservative Association’s Facebook page. “Maybe he will save jobs and clean up boat harbour with his guitar playing.”

Others leapt to his defence: “You many see a celebrity, I see a rock solid man capable of speaking on behalf of concerned citizens in political circles,” said one.

Canyon, 49, was born Frederick George Lays Jr. His father was a hospital chief laboratory technologist, his mother a medical office assistant. He changed his name about two decades ago on the advice of a lawyer who told him he’d never successfully market himself as a musician without the FritoLay chip company filing a lawsuit.

Canyon’s wife and young son also changed their names. And he never looked back, landing runner up in 2004 on the television show Nashville Star, a country music version of American Idol and also winning a Juno Award. In 2014, Canyon announced he planned to seek the federal Tory nomination in the Alberta riding of Bow River, but changed his mind after a health scare.

He still lives in Calgary, but for now is renting a home in New Glasgow near his campaign headquarters. His candidacy came about abruptly and, to some, puzzlingly. Roger MacKay, then the mayor of the town of Westville, fought and won the Conservative nomination for the riding but abruptly resigned in August, citing personal reasons. It was then Canyon got the call from the party. “I’ve always had an innate need to serve,” he says referring to his desire to join the Air Force, unrealized because he has Type 1 diabetes. 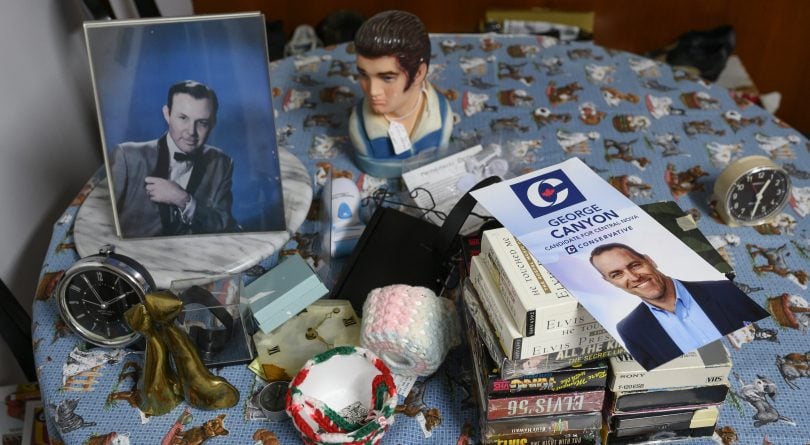 Canyon’s pamphlet, right, amongst musical paraphernalia in the home of Bill Bowman, the singer’s former co-worker (Photograph by Darren Calabrese)

As thunder claps in the distance, the residents of the next house greet Canyon like it’s old home week. “Big Fred,” booms Bill Bowman, an old acquaintance with whom Canyon once worked at the hospital.

Inside, as they chat in the kitchen, Bowman seems oblivious to the name change, joking about how “Fred” used to unclog toilets and screw in light bulbs with him at the hospital. After hugs, selfies and Canyon’s reassurances that he has finished his latest tour and will be campaigning right up to election day, Canyon tips his hat.

Outside, the skies have unleashed a torrential downpour. But the singer-candidate is unfazed, sauntering slowly in his cowboy boots towards the van.

When you’re wearing the hat, he says, you don’t have to run through the rain.

Apparently, it was the right choice after all.