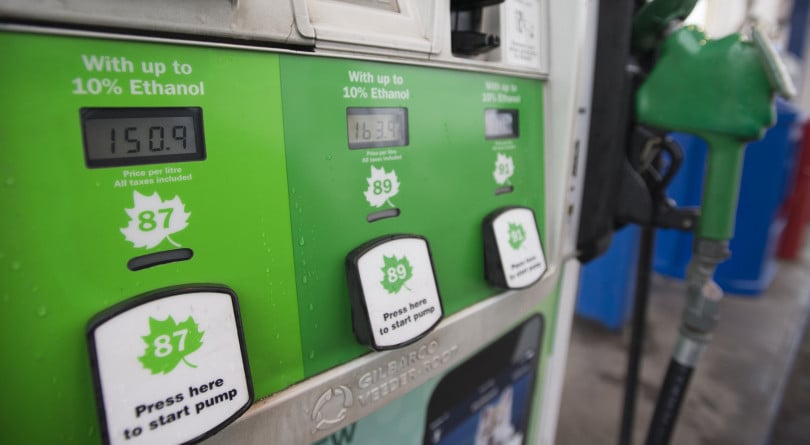 A fuel pump is pictured at a gas station in Vancouver on July 17, 2019. (Jonathan Hayward/CP)

Faced with the Ontario Conservative government’s plan to force gasoline retailers to slap stickers on their pumps showing the cost of the federal Liberal government’s carbon tax, the association that represents the owners of more than half of the gas stations in Canada found that proposal “a bit partisan” and suggested a less politicized alternative.

Instead of the stickers Premier Doug Ford’s government is imposing this month—flagging how the federal carbon tax adds 4.4 cents per litre now and is slated to rise to 11.1 per litre cents in 2022—the Canadian Independent Petroleum Marketers Association (CIPMA) suggested a voluntary pie chart sticker, which would have shown everything that goes into the price of gas.

Jennifer Stewart, the CIPMA’s president and chief executive officer, said in an interview that her association made the proposal in talks with the Ford government late last year. “We were told they were looking at a sticker—they were quite upfront about that,” Stewart said. “We actually proposed an option to the government that disclosed everything that goes into the price of gas—the crude price, the wholesale price, the marketing margin, taxes, both provincial and federal, and, where applicable, how some municipalities impose their own gas tax.”

In other words, for a driver who glanced at the pie chart while filling up, the carbon tax wouldn’t be the first thing to pop out. In fact, it might look modest by comparison to those other taxes and costs. By contrast, the stickers now being mailed to gas station owners by the Ford government show the federal carbon tax in isolation, illustrated by an upward swooshing arrow representing that planned increase in the levy, which is meant to discourage the carbon emissions that are the main culprit behind climate change.

“We are non-political by nature, but we do want consumers understanding everything that goes into the price of gas,” Stewart told Maclean’s. Still, she said her members, whose companies own more than 7,000 of Canada’s roughly 12,000 gas stations, have no plan to defy the law or challenge it in court.

“Our members as an association are going to do what the law indicates,” Stewart said. “We do feel that the messaging is a bit partisan in nature. It would be more beneficial if we painted a larger picture that shows all the components that go into the price of gas.” The timing of the Ontario sticker requirement coming into force is significant, since the Liberals’ carbon tax is being opposed by the federal Conservatives, and is expected to be a major point of debate is this fall’s federal election campaign.