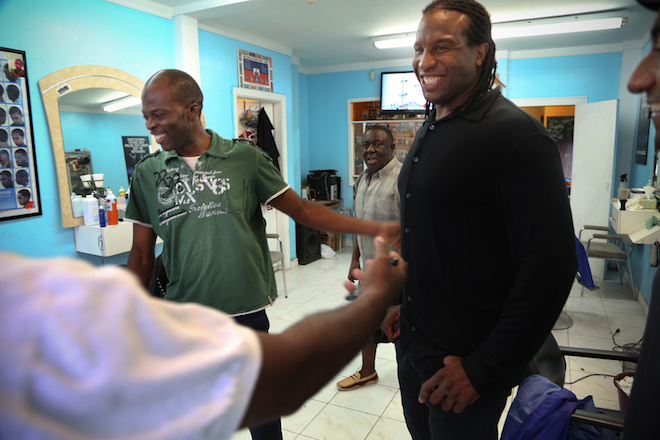 Georges Laraque, once the NHL’s most feared hockey enforcer—a man who dropped his gloves 142 times while in uniform—is lying in bed alone in a Boston hotel room watching a film on his laptop, bawling. It’s the night before his Montreal Canadiens play their first game of the 2009 Stanley Cup playoffs against the Boston Bruins. But Laraque is focused on a documentary, Earthlings. In it, a stray dog is tossed into a garbage truck and the compactor slowly descends on him. In another scene, a pig hangs upside down from a rope in a slaughterhouse until a man walks onscreen and slits its throat.

Laraque has feasted on pork, chicken and beef his entire life to fill out his six-foot-three, 245-lb. frame. But he woke the next morning a vegan, vowing never to eat meat again, or use any product coming from an animal.

The Bruins went on to dominate the first round matchup, winning in four straight games. Laraque finished what would be his last trip to the playoffs with no points and only four penalty minutes. But within a year he’d joined the Green Party of Canada, and shortly after, the first-generation Canadian of Haitian immigrant parents was introduced as the party’s deputy leader.

Now Laraque is gearing up to run in his first election. Liberal MP Denis Coderre already stepped down in the Montreal riding of Bourassa to run for mayor and Laraque made his intentions to run in the riding official on Tuesday. Standing alongside Green party Leader Elizabeth May in Montreal, Laraque announced he will be on the Green party ticket in the federal by-election for the vacated seat. The date of the by-election hasn’t been announced, but it is expected in the next four months.

“I never thought I would do this,” Laraque tells Maclean’s in the days before his official announcement. “In my mind, the greatest people that changed society were not politicians. Look at Gandhi, Martin Luther King, Malcolm X—not that I’m comparing myself to them—but you don’t have to be a political figure to be able to improve society.”

No other party has officially announced a candidate yet, but barring another celebrity, Laraque will have one advantage in his maiden campaign: people in Montreal all know who he is. Athletes who go into politics “start out with high-level name recognition and that’s going to give them a huge advantage,” says David Canon, author of Athletes, Actors and Astronauts, a study of political amateurs in American politics. “They don’t have to spend all that money introducing themselves the way a typical challenger would have to.”

In his 2011 autobiography, Georges Laraque: The Story of the NHL’s Unlikeliest Tough Guy, Laraque outlined his views: a dedication to the environment and Aboriginal rights, legalization of marijuana, and legalization and regulation of prostitution. His promotion of animal rights led him to invest in Crudessence, a Montreal chain of vegan restaurants. Laraque also guest-starred in the Edmonton-based TV series Tiny Plastic Men as “professional football’s only gay linebacker.”

Laraque is no stranger to the spotlight. He once joined the CBC’s figure-skating reality show Battle of the Blades and gave the proceeds to his charity Hockey for Haiti, which raised money to rebuild a hospital in Port-au-Prince after the 2010 earthquake. Indeed, the largest minority group in Bourassa, Que. is Haitian.

But victory could be as elusive as the Stanley Cup for Laraque. In the last federal election, the Greens finished with less than two per cent of the vote in Bourassa. Laraque is also no policy geek. “I know I can’t go and debate with [Stephen] Harper tomorrow. I won’t know what he’s talking about,” he says. “I’m not going to reinvent myself and try to know everything about all the policies and become a genius at it.” Laraque adds he’ll learn what is necessary to help his constituents, and on bigger questions—such as international relations—he’ll defer to Green party Leader Elizabeth May.

For her part, May says Laraque is the type of person who should run for office. “If only people who are interested in politics become MPs, then you have a group of MPs who don’t reflect what Canada looks like,” she says. “Canada in real life is multicultural. It’s people from all different careers and backgrounds. It’s not a bunch of lawyers.”

If anything, Laraque’s turn in politics should prove interesting. “What I think and feel, I’m going to say it,” he says. “And people are going to think, ‘This guy is f–king nuts.’ But you know what? What I’m going to say is the truth.”