Marks & Spencer separates toys by genre rather than gender, and a "Marlboro Man" dies from a tabacco-related disease 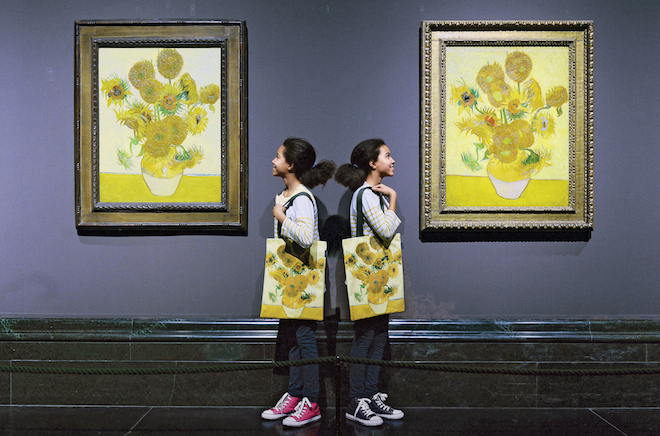 The two versions of Vincent van Gogh’s sunflowers are on display for three months in London, reunited for the first time in 65 years (Andy Rain/EPA)

In the wake of the Edward Snowden affair, it’s clear the biggest threat to privacy isn’t Google or Facebook, but government agencies who can monitor the communications of citizens with a keystroke. So it’s refreshing to see interim federal privacy commissioner Chantal Bernier calling for more oversight of Canada’s intelligence gatherers. In a report this week, she proposed more transparency about spying efforts and stricter controls to ensure data collection is proportional to the threats faced. Some surveillance is necessary in this day and age, but someone needs to be watching the watchers, too.

At a recent event, the head of Foxconn, the Chinese giant that makes gadgets for Apple, said it plans to relocate capital-intensive and high-tech manufacturing (e.g., big televisions) to the United States. Meanwhile, Wal-Mart said Thursday it would create a $10-million fund to help spur innovation in U.S. manufacturing, following up on its pledge last year to purchase $250 billion worth of U.S.-made products in the next 10 years. It’s too early to declare a reversal of global economic currents, but as these corporate behemoths shop for materials and labour, it’s nice to see them looking to North America. Perhaps they could cast their eyes on Canada next.

The annual public service announcements to “Get your flu shot” finally seem to be working. For the first time since the H1N1 pandemic triggered nationwide panic four years ago, Canada has been forced to track down extra influenza vaccine, with nearly every region in the country placing late-season orders to satisfy demand. Of course, there are some benefits to catching the flu. South of the border, the National Institutes of Health is offering US$3,000 to people willing to be injected with the actual virus—not the vaccine—for research purposes.

Britain’s education minister is blaming toy-makers for the fact that more women aren’t pursuing careers in science or math. Elizabeth Truss says if children’s toys weren’t so gender-specific, e.g., dolls for girls, Lego for boys, the world would have far more female engineers. Simplistic, sure, but a valid sentiment all the same. At least one major chain, Marks & Spencer, has already pledged to organize its toy department by genre, not gender. Other stores should consider playing along. 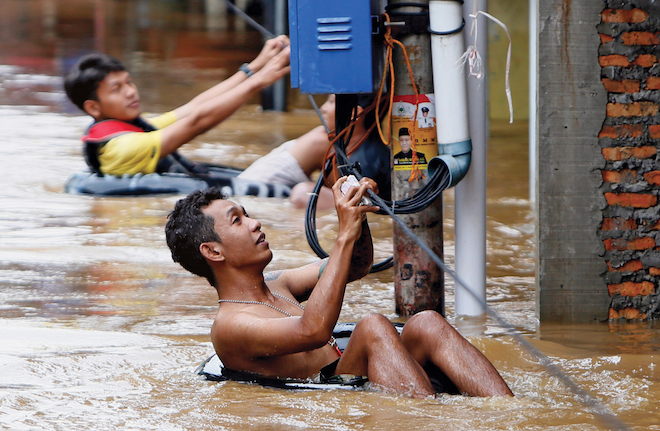 Flooding killed at least 30 people in Indonesia, including 11 in the capital of Jakarta, where more than 60,000 people were displaced (Adi Weda/EPA)

Finance Minister Jim Flaherty will deliver the budget on Feb. 11, and is continuing to promise a $3.7-billion surplus by 2015 (just in time for an election). It’s an admirable goal, but increasingly hard to imagine in light of depressing economic news. The loonie hit a four-year low this week, inflation is barely above one per cent and last year’s job growth was the worst since the recession. To top it off, TD Bank CEO Ed Clark warned that soaring personal debt (a result of rock-bottom interest rates) has made consumers vulnerable and could cause the economy to “undergrow” the U.S. for the next several years.

Syria’s peace talks went about as poorly as expected this week: the parties remained deadlocked over the divisive issues of transferring power to a transitional government and the future role of President Bashar al-Assad; there was no decision on allowing an aid convoy into besieged areas of the city of Homs. UN mediator Lakhdar Brahimi tried to downgrade expectations, saying he “never expected any miracles,” while voicing satisfaction that the conference took place at all. Meanwhile, the war’s grim tally keeps rising, with 130,000 now dead and nearly nine million displaced.

A measure of how numb Americans have become to public shootings: when a gunman opened fire last week at a mall outside Washington, killing three people, the incident barely made national headlines. Apparently, the accepted definition of “mass murder” requires four deaths, not including the shooter, and since 934 people have died in 146 mass shootings in the U.S. since 2006, well, sadly this didn’t rate. Then again, mass shootings represent only one per cent of all gun-related homicides in the U.S. No wonder most of the country failed to notice.

If there’s an excuse left to keep smoking, we can’t think of it. Last week, an American actor named Eric Lawson became the fifth former “Marlboro Man” from the iconic series of cigarette ads to die from a tobacco-related disease. He’d been smoking since he was 14, and died at 72 of chronic obstructive pulmonary disease. Meanwhile, a new study out of New Zealand rubbishes the long-held belief that quitting smoking causes long-term weight gain. So, to recap: butting out won’t endanger your health, but smoking can kill you.