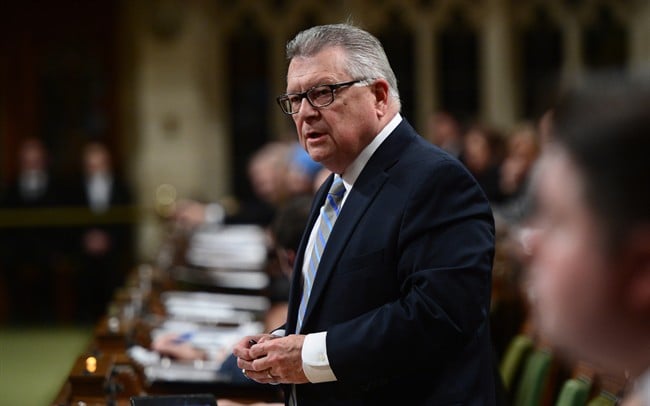 Public Safety and Emergency Preparedness Minister Ralph Goodale responds to a question during question period in the House of Commons on Parliament Hill in Ottawa on Thursday, Dec. 8, 2016. THE CANADIAN PRESS/Sean Kilpatrick

Ralph Goodale told MPs at a House of Commons committee Thursday he is weighing views on whether the Canadian Security Intelligence Service should be allowed to retain and use such information.

CSIS processed the metadata beginning in 2006 through its Operational Data Analysis Centre to produce intelligence that can disclose intimate details about individuals.

Metadata is information associated with a communication, such as a telephone number or email address, but not the message itself.

The court ruling means metadata can be kept and used by CSIS only if it relates to a specific threat to Canadian security or if it is of use to an investigation, prosecution, national defence or foreign affairs.

Privacy watchdogs from across the country said this week that Canada’s spy agencies should destroy the data trails of innocent people they collect incidentally during terrorism investigations, once the actual targets have been cleared of suspicion.

The office of federal privacy commissioner Daniel Therrien says metadata must be handled with care because it can reveal medical conditions, religious beliefs and sexual orientation, among other personal traits.

Goodale told MPs on the public safety committee the government would “consider all of the factors that are relevant in these circumstances” as it completes a review of national security policy.

“So you’re not closing the door, then, to the possibility of this happening again?” Dubé said. “Because to me it seems that if the Federal Court has deemed this illegal, then the answers should be clear.”

CSIS director Michel Coulombe told the committee he hoped the spy service would be in a position within about six months to decide what to do with the associated metadata collected over the 10-year period.

Conservative public safety critic Tony Clement wondered why CSIS was keeping the data in question at all.

Coulombe said the law dictates that CSIS must hang on to any data used in criminal or administrative proceedings. As a result, the agency is going through the material to see what it needs to keep.

“So before we rush and destroy that information, we have to make sure that by destroying it we’re not going to be contravening another court decision,” Coulombe said.

“We have to take the time to do that analysis.”