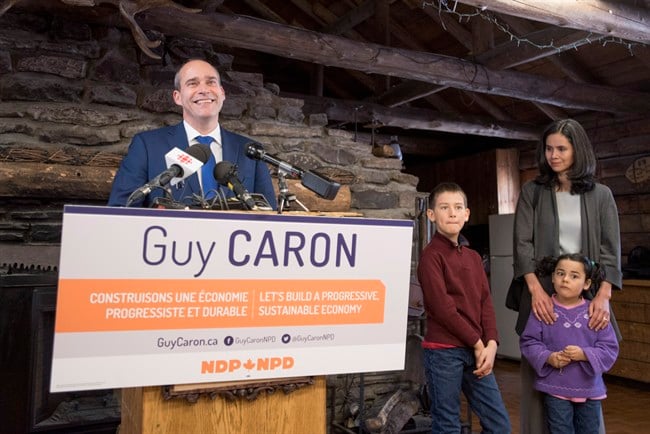 NDP MP Guy Caron stands with his son Dominic, 8, daughter Edith, 5, and wife Valerie Stansfield as he announces that he will run for the leadership of the New Democratic Party, on Monday, Feb. 27, 2017 in Gatineau, Que. THE CANADIAN PRESS/Justin Tang

GATINEAU, Que. – The ho-hum New Democrat leadership race got a little more competitive Monday as Quebec MP Guy Caron became the third candidate to officially declare that he wants to be the one to succeed Tom Mulcair.

The competition, which got off to a slow start in part because of an extended goodbye from Mulcair, has been slowly gaining momentum in recent weeks, with B.C. MP Peter Julian and northern Ontario MP Charlie Angus entering the fray.

Caron, a former economist who hopes to position himself as a would-be leader with financial acumen, announced his plans alongside his wife and two children at a news conference at a log cabin in Gatineau, Que.

Caron said the location holds a special place in his heart: it’s where late New Democrat leader Jack Layton held a campaign event in 2011 – the same year Caron became one of 59 MPs from Quebec elected as part of the NDP’s so-called “Orange Wave.”

Caron – who worked for the Communications, Energy and Paperworkers Union of Canada before launching a political career – also unveiled his first campaign plank Monday: replacing social programs with a basic income for all Canadians.

“Traditional economic plans of yesteryear that promised one thing and result in another is no longer acceptable,” Caron said. “Our citizens are asking for more – and frankly, they deserve not only better, but the best we can give them.”

He said plans to spend the week connecting with supporters in Ottawa, Montreal, Trois-Rivieres, Quebec City and his home town of Rimouski, Que.

As the only Quebec candidate in the race so far, Caron is well-positioned to speak about rebuilding support in his home province, where the NDP holds 16 seats.

Toronto and Atlantic Canada will also be key areas for growth, he said Monday.

“As a Quebecer who grew up in Rimouski, who lived in Ottawa, Montreal, Toronto in the past, I am well-placed to actually be able do that work that will be needed to ensure that the NDP will regain its strength coast-to-coast,” he said.

The NDP remains the second strongest political force in Quebec, said former NDP national director Karl Belanger. Support in the province is vital if the party is ever to chart a path to power, he added.

“That is where the NDP can count on some interesting support to build and form a government,” said Belanger, a Quebecer himself.

“There is no other path within the present electorate that would lead to an NDP government if there is not a sizable Quebec caucus.”

The NDP went from the presumptive front-runners at the start of the 2015 campaign to finishing a distant third, thanks in part to a divisive and controversial debate in Quebec over whether to permit face-coverings during citizenship ceremonies.

The Conservatives and the Bloc Quebecois campaigned against the NDP position, which endorsed a woman’s right to wear the niqab, Belanger said. Before long, Quebec voters no longer saw Mulcair as a viable option to replace Stephen Harper.

RELATED: Trump has forced the left and right to ask: What do we stand for?

Still, Quebec continues to represent the largest share of the current NDP caucus, along with British Columbia, he added.

The candidates are scheduled to meet face-to-face March 12 for a bilingual debate in Ottawa. Julian is fluently bilingual while Angus admits he’s working on his French daily.

Caron was tight-lipped Monday when asked about Angus’ ease with the language.

“This is not my call,” he said, noting he has had few French conversations with his caucus colleague. “I will leave it to francophone members who are in Quebec or outside of Quebec to determine his level of French.”

Manitoba MP Niki Ashton and deputy Ontario NDP leader Jagmeet Singh are also said to be considering whether to join the race.

Party members are scheduled to select a new leader by the end of October.