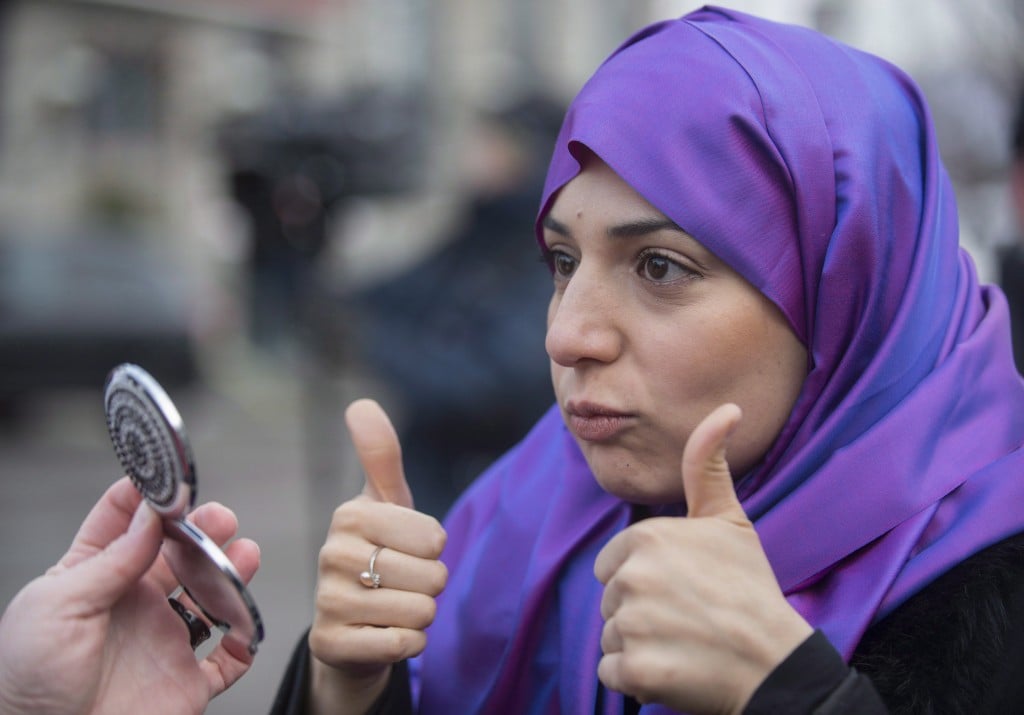 Nariman Eldoraini gives a thumbs up as she checks her hijab in a mirror during a gathering in Montreal, Sunday, January 12, 2014, to oppose the proposed Quebec Values Charter. (Graham Hughes/CP)

For Farrah Khan, a counsellor at a Toronto clinic for women experiencing violence, the last several months have signalled a growing sentiment of Islamophobia in Parliament, and across Canada. The government’s anti-terror and “barbaric cultural practices” bills haven’t helped, she says, and she’s seeing Muslim women come into the clinic saying they’re being attacked on the subway and at school.

Even a senior Conservative senator, Marjory LeBreton, acknowledged this week that the party needs to “work harder” so that Muslims don’t feel alienated. And Stephen Harper’s Tuesday comments about women wearing niqabs during their Canadian citizenship ceremonies made things seem worse.

“Why would Canadians, contrary to our own values, embrace a practice at that time that is not transparent, that is not open, and frankly is rooted in a culture that is anti-women?” he told the House of Commons.

Khan says these sort of comments deflect from acts of violence against women the government should be speaking out about. “We should be addressing the more than 1,000 missing and murdered indigenous women,” she said in a phone interview with Maclean’s. “As a feminist and as a Muslim woman, it’s difficult for me to see that Muslim women’s bodies are being used as a battleground. It’s anti-women to dictate what women should and shouldn’t wear.”

That’s why she was thrilled to see her frustration shared by hundreds of people using the hashtag #DressCodePM, an attempt to criticize and parody the government’s stance on the niqab.

It all started Wednesday morning:

Just about to get dressed, was thinking white blouse, green Celine skirt, white tights, is that ok, @pmharper? #dresscodePM

Seeking clarity on whether or not #dresscodePM will put an end to our ritualistic bath time shenanigans. pic.twitter.com/5fVnSxt8hp

Some remained solemn and earnest.

do you like how my hijab matches my mug of your male tears? stop telling women how to dress @pmharper #dresscodePM pic.twitter.com/jcfg5V3DqY — sarah, plain & tall (@geekylonglegs) March 11, 2015

And some got creative.

Trying to pick attire that most projects my equality. Can you help me #DresscodePM? pic.twitter.com/sO5MmRkAh5 — Sandy Garossino (@Garossino) March 11, 2015

But people made their point that they weren’t happy. Shireen Ahmed, an activist and sports writer who wears a hijab, joined in this afternoon. “I took great offence to the comment,” she said over the phone. “It’s like some bad Monty Python episode. It’s becoming so ridiculous that our elected officials are that ignorant. They’re not even covering up their bigotry–full pun intended.”

Now airing on TLC the new “What Not to Wear ” ft @pmharper as the new host #dresscodePM pic.twitter.com/3qhECstHYK

She hopes this support for Muslim women will continue after the hashtag dies down.

“I’m a Canadian of Pakistani descent, born and raised in Halifax. I played hockey, I eat poutine, I speak French. I’m pretty much the Canadian stereotype,” she says. “It’s disheartening, but I will remain hopeful. We have an election coming up soon.”