By By Lee-Anne Goodman, The Canadian Press November 7, 2014 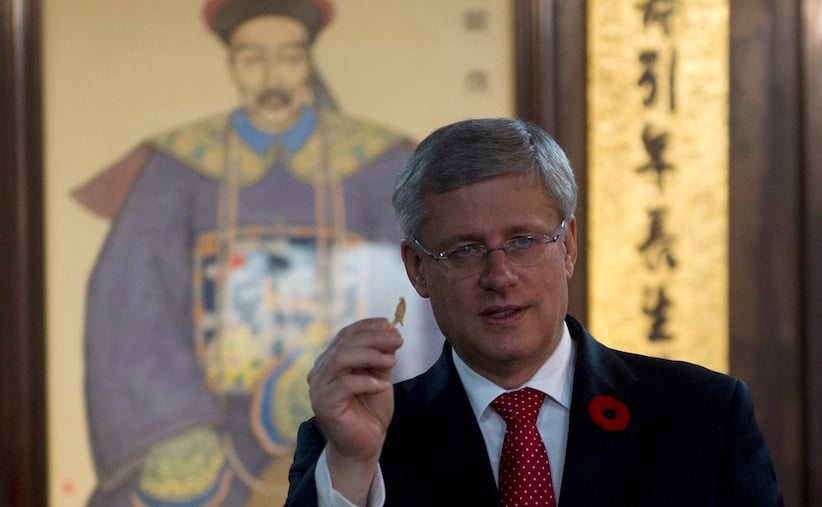 HANGZHOU, China – Prime Minister Stephen Harper made the pitch for Canadian exporters on Friday while also extolling Canada as an excellent place to do business during his third visit to China.

Harper attended a China-Canada business conference where he said that a half-million Canadian jobs depend upon Canadian-Chinese trade.

He added to chuckles from the crowd that while the number might not seem significant to the most populous country on the planet, it is to Canada.

The Prime Minister’s Office said the locations were selected because their needs match Canadian strengths, particularly in the areas of information technology, electronics, automotive, aerospace, medicine, energy and finance sectors.

Following his brief remarks, Harper took a morning stroll through the bustling downtown shopping district, making his way to a traditional medicine museum.

Curious onlookers gathered on the colourful sidelines, waving at Harper and his wife, Laureen, and snapping photos on their smartphones.

Inside the museum, the prime minister held up some Canadian ginseng, declaring: “Canadian ginseng … The most expensive here, the best … That is why we’re here.”

He also travelled to the stately lakeside Zheijian state guest house, where he was greeted by Chinese officials, including the party secretary of the Zheijiang province.

Later Friday, he met with Jack Ma, the executive chairman of Alibaba Group, the world’s largest mobile commerce company, to discuss how Canadian businesses can leverage e-commerce platforms like Alibaba to grow their businesses internationally.

Harper lauded Canada’s low corporate tax rate and debt levels during a question-and-answer session at Alibaba, portraying Canada as an exceedingly attractive place to do business for Chinese investors.

Alibaba sells Canadian goods on its site, ranging from Atlantic lobsters to Roots apparel and Niagara ice wines. Chairman Jack Ma says 100 million people are online shopping on Alibaba at any given moment, adding that his company wants to help Canadian small- and medium-sized companies get established.

He added Alibaba might set up a Canadian operation.

Harper travels to Beijing on Saturday, where he’ll meet with Chinese President Xi Jinping, who has called for a more open form of government since taking office in 2012.

The prime minister’s latest visit to China was almost scrubbed entirely due to tense relations between the two countries in recent months.

Harper accused China of cyber espionage over the summer, while China accused a Canadian couple living in China of being spies.

Some Conservative cabinet ministers, including Jason Kenney, are uneasy about forging closer ties to China, in part due to human rights concerns.

But with China’s middle class exploding, business groups have urged the government to strengthen the relationship.

Harper is leading a delegation of Canadian business representatives during his China trip. Industry Minister James Moore and International Trade Minister Ed Fast are also along for the visit.

Perrin Beatty, head of the Canadian Chamber of Commerce, moderated the session at Alibaba.