Here's a COVID threat Justin Trudeau might want to address—pronto

Election Image of the Day: While the Liberal leader and his opponents sparred over vaccine mandates, photos of cheek-by-jowl crowds at Pearson Airport were flying around social media 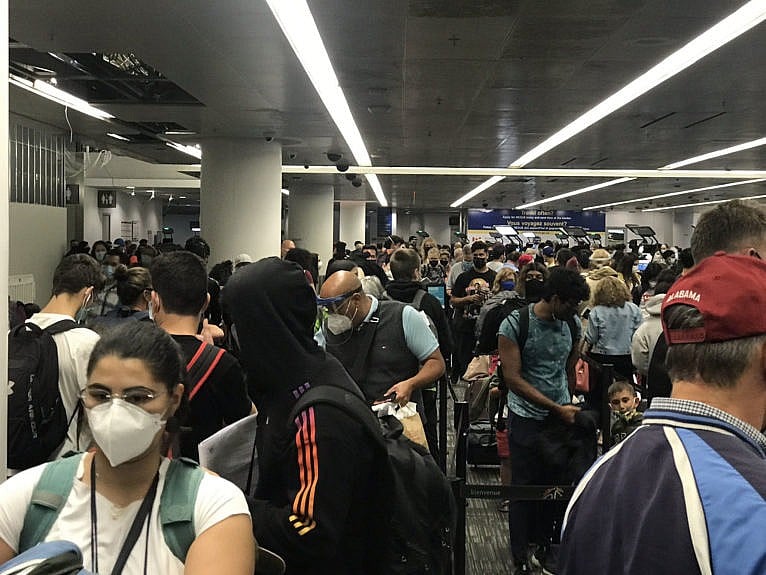 @profamirattaran Tweeted, “Has federal Canada, which is responsible for airports, learned nothing in nearly two years of pandemic? Look at this.” (Courtesy of Amir Attaran/Twitter)

Since March 2020, Canadians have resigned themselves to lining up. As society became aware of what it meant to socially distance, these lines became more organized and routine: keeping six feet apart, as dictated by floor stickers, turned out to be a fairly easy habit for folks to learn. Yet here we are, 18 months into the pandemic, and that lesson is being forgotten—or perhaps ignored, or overwhelmed, since most Canadians are vaccinated and borders are beginning to reopen. Amir Attaran, a doctor and frequent critic of poor pandemic decision-making (he has opined for Maclean’s among other publications), was aghast at how weak crowd control was at Toronto’s Pearson International Airport, where mandatory masks seemed the only clue hinting at the pandemic. There were, he claimed, no hand sanitizing stations in sight, nor reasonable distancing, nor employees directing people to keep apart. Airports are federally operated institutions, and this failure falls at the feet of the federal government. Busy on the campaign trail, Prime Minister Justin Trudeau has pointed to the billions of dollars in direct relief and economic stimulus, which led to high approval ratings—and, ultimately, to him calling what many deem a needless election. If the Delta variant continues to spread—and images like this indicate it will—it would be another blow to his mission of securing a majority government. A blow, it must be said, that would be at least partly self-inflicted.