A solemn affair, as South Africa buries its great leader 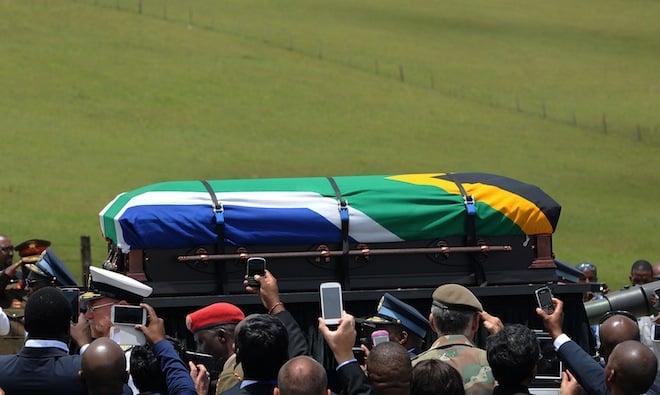 Nnenna Nwakanma made a 28-hour journey from Abuja, Nigeria, to witness Nelson Mandela being buried.

“I couldn’t do the long walk to freedom,” says Nwakanma, “but I couldn’t miss the opportunity to do the last walk with him.” Nwakanma is one of hundreds of people across Africa who made the pilgrimage to Qunu, Mandela’s home village and final resting place, to pay tribute to South Africa’s first black president and global human rights icon. The burial on Sunday was the conclusion to 10 days of mourning in South Africa for Mandela, known as Tata Madiba—the father of the nation.

Around noon on a bright Sunday, the funeral procession made its way from a big tent to the burial grounds. Unlike the previous memorial events held in Johannesburg and Pretoria, this time there was no celebratory singing or dancing. All you could hear was the formal, sombre sounds of the military band.

For a brief moment, I could see Mandela’s casket as it was being carried to the plot, situated on a high grassy plain overlooking the village. It felt right to see Mandela being returned to Qunu, back to the land he loved and where he said he always wanted to die. When his casket disappeared from sight, a South African photographer beside me said in a quiet voice, “he’s gone, guys.” Then, eight cannons fired a booming 21-gun salute and a man by the side of the road screamed “Nelson Mandela” as six air force jets roared overhead. One of the jets broke from formation, symbolizing losing Mandela.

“It was my wish to come here when the old man passed away,” says Phlane Ngcongwane, 57, who came on a 12-hour bus ride from Vereeniging, a town in the province of Gauteng. “People were trying to discourage me, saying you won’t see anything, but I am here,” says Ngcongwane. “I feel so grateful.”

Not every visitor had a happy journey. Onica Nyembezi, a 66-year-old woman who says she is the daughter of Mandela, was turned away at the funeral gates, a reminder of the deceased statesman’s tangled family life. “I’m here for my father,” says Nyembezi, a tall woman with big hands and close-cropped hair who bears more than a passing resemblance to Mandela. “I don’t know what to say,” she says, “I’m just somebody that doesn’t know where she is.”

Nothing about Sunday was easy. In Qunu, people were having deep conversations about living life according to Mandela’s ideals of peace and tolerance, giving the day a religious quality.

Ndumiso Jaca drove the 900 winding kilometres from his home in Pretoria to Qunu, alone on his BMW motorcycle. “It’s a calling to ride all alone, to reflect on where we came from and where we are now,” says Jaca, a 43-year-old wearing an outfit of all black leather, sitting outside Mandela’s red brick house in Qunu. “It’s a duty for me to be here,” he says, “that reflection really knocked some sense into me, we must reach out and help others.”

Nwakanma said being part of Mandela’s burial was not only bearing witness to history, but was spiritually fulfilling. “We were wrapped up in the smoke from the cannons, the planes flying over was priceless,” she says. “I don’t feel any emptiness, I just feel it is the end of a journey.”

Following the burial, local residents in Qunu said that if it rained it would mean the ancestors are blessing Mandela. Hours later, it poured.