Hillary Clinton and Donald Trump are not equal. Period.

Anne Kingston on the false equivalencies in the U.S. election 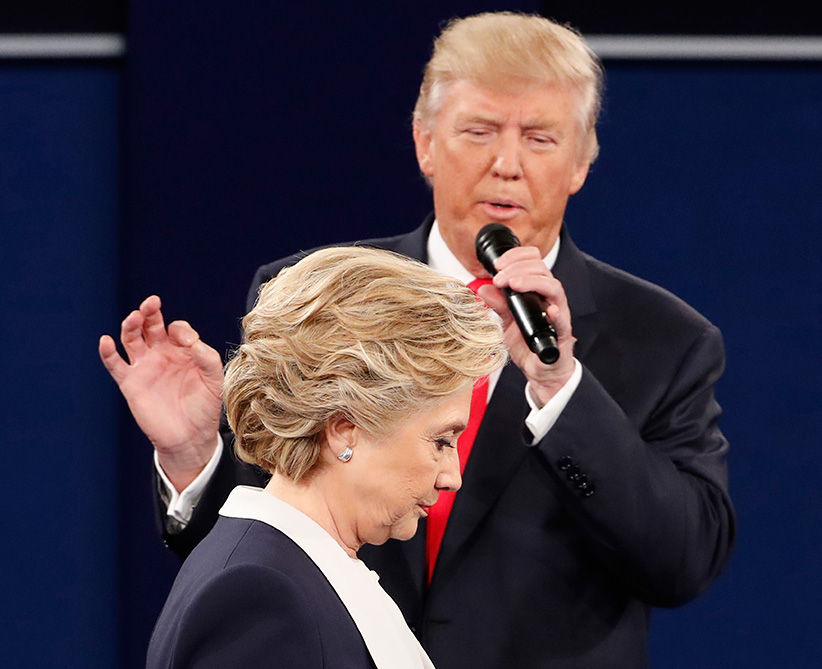 ‘What about you?’ Alleged rapist vs. alleged misuser of email. (Jim Young/Reuters)

Last month, in a BBC interview, humourist David Sedaris provided a brilliant analogy to express his incredulity that any American could be undecided about for whom to vote. He likened the decision to a flight attendant coming down the aisle to ask, “Would you like the chicken or would you like the human feces with broken glass in it?”—only to have someone ask: “Well, how is the chicken cooked?” It’s a mark of the irrational tenor of the U.S. campaign that it needs to be said Sedaris considers Hillary Clinton the poultry option.

“How is the chicken cooked?” could be the epitaph for this election, an uncivil war in which false equivalencies between the candidates are so mind-numbing that minds have been, well, numbed. Oh, for the tame days when Matt Lauer interrupted Clinton while allowing Trump to ramble on incoherently during a televised forum. Now the FBI is reviewing newly discovered emails that may have gone through Clinton’s server, offering zero details, while not investigating ties between Donald Trump, his top advisers, and the Russian government for fear of muddying the electoral process.

Groupthink has come to govern Clinton coverage across the spectrum: she’s reflexively described as “flawed” or “deeply flawed” (unlike other humans or candidates), as well as “corrupt,” taking a cue from Trump’s “Crooked Hillary” meme. (During the debates, Clinton made 13 false claims; Trump made 104. But Clinton made 13! ) Even worse for a girl, she’s “unlikeable.” And we know how dangerous unpopular girls can be—from Carrie to Misery.

The upshot: the first U.S. election to potentially elect a female president has been strip-mined of any joy or the sort of inspiration that surrounded Barack Obama’s first win. The very idea that voters could support Clinton enthusiastically, that they could like her, is breaking news, seen this weekend in the Toronto Star’s story with the headline: “A Hillary Clinton secret: lots of voters really like her.” Yet anyone who has attended a Clinton rally where generations of women and men stand in staunch support know otherwise. This week, even Salman Rushdie took to Twitter to try to right the inequitable comparisons: “So to recap. Trump will go on trial in November accused of racketeering, and again in December accused of child rape. He is a sexual predator, hasn’t released his tax returns, and has used his foundation’s money to pay his legal fees. He has abused the family of a war hero . . . oh, but let’s talk about some emails Hillary didn’t send from someone else’s computer, that weren’t a crime anyway because that’s how to choose a president. Come on, America. Focus.” Slate doubled down with “Making the choice: How should voters weigh the sins of these uniquely corrupt candidates?” Under Trump, 239 points are listed, including, “Refused to rule out using nuclear weapons against ISIS,” and, “Said about women, ‘You have to treat ’em like s–t.’ ” Under Clinton, one: “Poor email server management.”

Given that fewer than five points now separate the two, with Trump leading in one poll, millions of Americans must disagree. One is Trump’s campaign manager, Kellyanne Conway, who expressed outrage when a CNBC interviewer interrupted a discussion about the investigation into Clinton’s email to mention Trump’s hearing for allegedly raping a 13-year-old. “Oh, come on,” she said. “That you would analogize the two? Give me a break.”

And that’s where bogus equivalencies have gotten us: allegations of email impropriety are more villainous than those of raping a child. It’s an upside-down world where, were this a novel, Trump would be the buffoonish villain. Yet half of America see him as a “boss,” or a man who plays one on TV. They see a candidate with contempt for democratic and judicial process, whose lack of experience is his winning qualification, a businessman who has filed for bankruptcy six times. They see a hero promising a nostalgic return to the Neverland of American greatness, a time when men earned the bacon and women ran for the PTA. It’s like the real-life version of the Simpsons’ episode in which Springfield residents buy a faulty monorail from a con man.

According to the Star, Clinton’s greatest strength rests with voters over 50 who “identify” with her, which, given current events, is downright depressing. The demonic imagery—the “Trump the bitch” T-shirts, the chants of “Lock her up”—has morphed to a witch hunt, with calls for the stock ending. Republican Sen. Richard Burr, chairman of the Senate intelligence committee, joked gun owners might want to put “a bull’s eye” on Clinton’s face. Trump wondered what would happen to Clinton if her Secret Service detail was disarmed. This weekend, at a rally, Trump surrogate Wayne Allyn Root, author of Angry White Male, wished death on Clinton and her aide Huma Abedin: “And the ending, if we all get our wish, is like Thelma and Louise!” he said.

Meanwhile, Clinton, like Rushdie, is begging America to focus: “In these last days, let’s not get distracted from the real choices in this election and the consequences for your future,” she said this week. Problem is, for many Americans, the monorail has left the station—with only one dinner choice. And it’s definitely not the chicken.