Excerpt from HRC: State Secrets and the Rebirth of Hillary Clinton 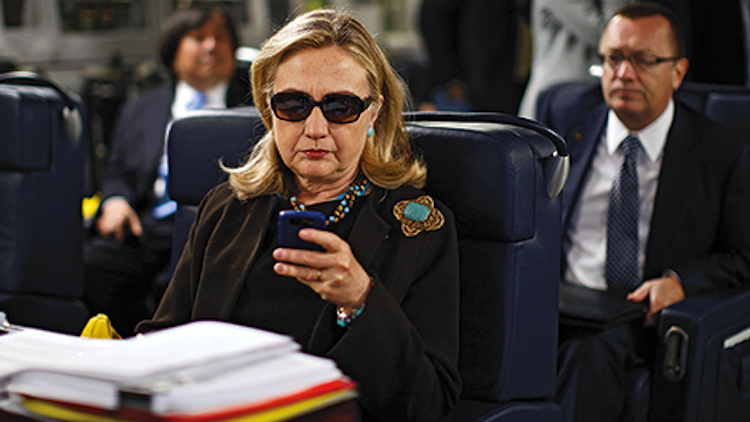 Hillary Clinton has said she will decide this year whether to once again run to become the first female president of the United States. With a 6-to-1 lead over her potential rivals, the former secretary of state and former first lady already has the biggest lead of any candidate ever seeking the Democratic nomination for president. With 71 per cent support, she is far beyond her next closest competitor, vice-president Joe Biden, who has 12 per cent, according to one recent poll. In their new book, HRC: State Secrets and the Rebirth of Hillary Clinton, journalists Jonathan Allen and Amy Parnes dig into the world around Clinton in the wake of her failed 2008 bid, with rare, officially sanctioned co-operation from her colleagues and confidants:

Inside a cramped third-floor office of Hillary Clinton’s once-bustling presidential campaign headquarters in the Ballston neighbourhood of Arlington, Va., Kris Balderston and Adrienne Elrod put the finishing touches on a political hit list. It was late June 2008, and Hillary had dropped her bid for the presidency. The war room, where her brain trust had devolved into profanity-laced shouting matches, was empty. The data crunchers were gone. The political director had drifted out. A handful of Hillary’s aides had already hooked up with Barack Obama’s campaign in Chicago.

Balderston’s salt-and-pepper beard gave him the look of a college English professor who didn’t need to shave for his job. Then in his early 50s, he had been with the Clintons since their White House days, serving as a deputy assistant to the president and later as Hillary’s legislative director and deputy chief of staff in the Senate. The official government titles obscured Balderston’s true value: He was an elite political operator and one of Hillary’s favourite suppliers of gossip. Elrod, a toned 31-year-old blond with a raspy Ozark drawl, had an even longer history with the Clintons. She had known Bill Clinton since at least the age of five. Her father, John Elrod, a prominent lawyer in Fayetteville, first befriended the future president at Arkansas Boys State when they were teenagers. She had first found work in the Clinton White House after a 1996 internship there, then became a Democratic Party political operative, and later held senior posts on Capitol Hill. Trusted because of her deep ties to the Clinton network, Elrod helped Balderston finalize the list.

For months, they had meticulously updated a wall-size dry-erase board with colour-coded symbols, letters and arrows to track which lawmakers were leaning toward endorsing Hillary and which were headed in Obama’s direction. For example, the letters “LO” indicated that a lawmaker was “leaning Obama,” while “BD” in blue denoted that he or she was a member of the centrist Blue Dog coalition on Capitol Hill.

As one of the last orders of business for a losing campaign, they recorded in a Microsoft Excel spreadsheet the names and deeds of members of Congress. They carefully noted who had endorsed Hillary, who backed Barack Obama, and who stayed on the sidelines—standard procedure for any high-end political organization. But the data went into much more nuanced detail. “We wanted to have a record of who endorsed us and who didn’t,” said a member of Hillary’s campaign team, “and of those who endorsed us, who went the extra mile and who was just kind of there. And of those who didn’t endorse us, those who understandably didn’t endorse us because they are [Congressional Black Caucus] members or Illinois members. And then, of course, those who endorsed him but really should have been with her?.?.?.?that burned her.”

For Hillary, whose loss was not the end of her political career, the spreadsheet was a necessity of modern political warfare, an improvement on what old-school politicians called a favour file. It meant that when asks rolled in, she and Bill would have at their fingertips all the information needed to make a quick decision—including extenuating, mitigating and amplifying factors—so that friends could be rewarded and enemies punished.

Their spreadsheet formalized the deep knowledge of those involved in building it. Like so many of the Clinton help, Balderston and Elrod were walking favour files. They remembered nearly every bit of assistance the Clintons had given and every slight made against them. Almost six years later, most Clinton aides can still rattle off the names of traitors and the favours that had been done for them, then provide detailed accounts of just how each of the guilty had gone on to betray the Clintons—as if it all had happened just a few hours before. The data project ensured that the acts of the sinners and saints would never be forgotten.

There was a special circle of Clinton hell reserved for people who had endorsed Obama or stayed on the fence after Bill and Hillary had raised money for them, appointed them to a political post, or written a recommendation to ice their kid’s application to an elite school. On one early draft of the hit list, each Democratic member of Congress was assigned a numerical grade from one to seven, with the most helpful to Hillary earning ones and the most treacherous drawing sevens. The set of sevens included senators John Kerry, Jay Rockefeller, Bob Casey, Patrick Leahy and Ted Kennedy.

Yet even seven didn’t seem strong enough to quantify the betrayal of some one-time allies. When the Clintons sat in judgment, Claire McCaskill got the seat closest to the fire. Bill and Hillary had gone all out for her when she ran for Senate in Missouri in 2006, as had Obama. But McCaskill seemed to forget that favour when NBC’s Tim Russert asked her whether Bill had been a great president during a Meet the Press debate against then-senator Jim Talent in October 2006. “He’s been a great leader,” McCaskill said of Bill, “but I don’t want my daughter near him.”

Instantly, McCaskill regretted her remark; the anguish brought her “to the point of epic tears,” according to a friend. She knew the comment had sounded much more deliberate than a forgivable slip of the tongue. So did Hillary, who immediately cancelled a planned fundraiser for McCaskill. After winning the seat, she was terrified of running into Hillary Clinton in the Capitol. “I really don’t want to be in an elevator alone with her,” McCaskill confided to the friend.

But Hillary, who was just then embarking on her presidential campaign, still wanted something from McCaskill—the Missourian’s endorsement. Women’s groups pressured McCaskill to jump aboard the Clinton bandwagon, and Hillary courted her new colleague personally, setting up a one-on-one lunch in the Senate dining room in early 2007. Rather than ask for her support directly, Hillary took a softer approach, seeking common ground on the struggles of campaigning, including the physical toll. “There’s a much more human side to Hillary,” McCaskill thought.

Obama, meanwhile, was pursuing her, too, in a string of conversations on the Senate floor. Clearly, Hillary thought she had a shot at McCaskill. But for McCaskill, the choice was always whether to endorse Obama or to stay on the sidelines. In January 2008, she not only became the first female senator to endorse Obama but also made the case to his team that her support would be amplified if governors Kathleen Sebelius and Janet Napolitano came out for him at roughly the same time. McCaskill offered up a small courtesy, calling Hillary’s personal aide, Huma Abedin, ahead of the endorsement to make sure it didn’t blindside Hillary.

But the trifecta of women leaders giving Obama their public nod was a devastating blow. Hate is too weak a word to describe the feelings that Hillary’s core loyalists still have for McCaskill, who seemed to deliver a fresh endorsement of Obama—and a caustic jab at Hillary—every day during the primary.

It reached the point where Hillary—in a stale, sterile conference room at the DNC headquarters—asked uncommitted “super-delegates” to give her their word, privately, that they would back her if it came to a vote at the convention, even if they weren’t willing to take the political risk of coming out for her publicly ahead of time. As a last resort, Hillary pleaded with them to simply refrain from adding their names to Obama’s column. Bill would make that pitch, too, in phone calls and when he crossed paths with lawmakers. Please, just don’t endorse Obama, he cajoled.

Balderston and Elrod recorded them all, good and bad, one by one, for history—and for Doug Band, Bill Clinton’s tall, balding, post-presidency aide-de-camp. In the summer of 2008, Hillary couldn’t have known whether or when she would run for president again. But she knew who was on her side and, name for name, who wasn’t.

Adapted from HRC: State Secrets and the Rebirth of Hillary Clinton. Copyright © 2014 by Jonathan Allen and Amie Parnes. Published by Crown, a division of Random House LLC, a Penguin Random House Company.