Hold the constitutional crisis, we have a plowing match to run 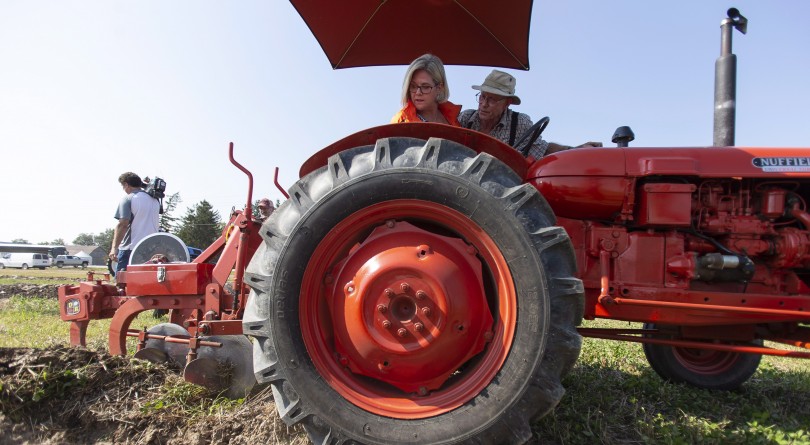 On this much Doug Ford and Andrea Horwath agree—at least when stumping for rural voters: Toronto is a bubble.

“Don’t get me wrong, I love Toronto,” Ford told attendees at the 101st annual International Plowing Match and Rural Expo. “But I call it the bubble. You have to get out of the bubble.” The crowd roared with approval.

When it was NDP leader Andrea Horwath’s turn to address the crowd gathered in Chatham-Kent, Ont., she echoed Ford’s sentiment: “I bought a whole bunch of Toronto MPPs out of the bubble to hang with you fine folk.” More cheers.

But as MPPs effectively took a day off work to glad-hand with rural folk, take pictures next to tractors and wave from a parade float, here’s what they left behind in the “bubble.”

The City of Toronto’s clerk is desperately seeking clarity on whether the upcoming Oct. 22 vote will be held with 47 wards—as a judge recently ordered when he ruled a Progressive Conservative bill to cut council in half during an ongoing election cycle to be unconstitutional—or whether the Tories will rush through new legislation to cut council to 25 wards, as Ford promised, even if they have to use the controversial “notwithstanding clause” to bypass the judge’s ruling.

Time is of the essence inside the bubble: Toronto’s city staff has said they’re reaching a “tipping point” that they can hold any vote—be it in 47 or 25 wards—come election day. It’s impossible to prepare for both given the time crunch, they warn, which you might think is why Ford ordered the Ontario legislature to a rare midnight session to hurry things along, never mind the growing amount of protesters in Toronto.

But that’s not what the rush was really about. Not in itself. Rather, the point was to get MPPs here on a Tuesday morning in Chatham-Kent to fulfill the tradition of the legislature taking a day off for a plowing match. It’s a wonderfully quaint practice: politicians set aside their partisan differences secure in the knowledge that they’re united in their commitment to public service. It’s also never seemed more unmoored from reality: this year, the backdrop is a premier threatening to use a constitutional battering ram to settle old scores with his former city council colleagues, and calling the authority and impartiality of the judiciary into question. The province, in short, is facing arguably its most serious constitutional question since the Charlottetown Accord.

“The International Plowing Match highlights the importance of small-town Ontario to the overall economy,” says Monte McNaughton, the PC MPP for Lambton-Kent-Middlesex. The Tories hosted 300 people at a government caucus event the night prior and “to be blunt, [Toronto city council] wasn’t mentioned once.” 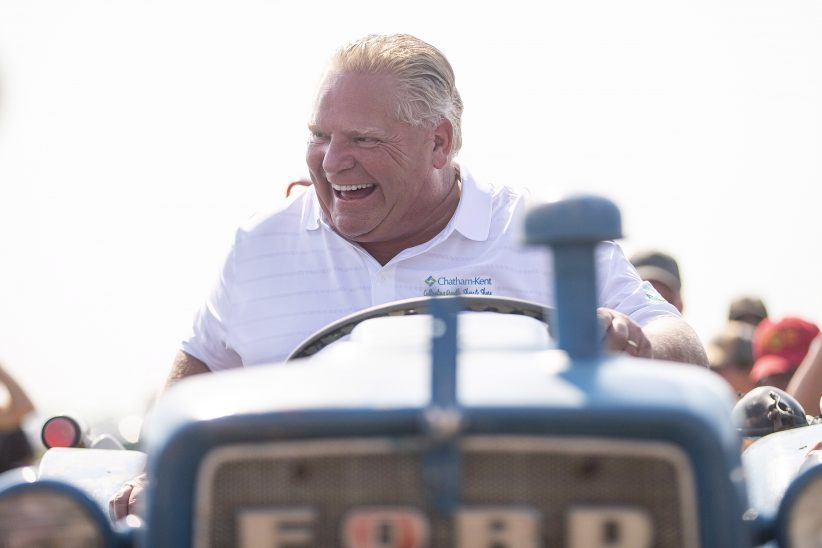 The match is organized by the Ontario Plowmen’s Association, as a celebration of life in rural Ontario. There are exhibits on the future of farming, displays of historical agricultural equipment and events like “tractor dances.” Tens of thousands are expected to attend over the event’s five days. Members of the Opposition NDP spent the morning tossing apples out to them.

Not everybody, though, had left the troubles of Canada’s largest city behind. “We’re leaving our city in a state of limbo,” says Mitzie Hunter, the Liberal MPP for Scarborough Guildwood, a riding where locals are affected by the council cuts. “Today is a business day. Having a decision made today will help the [Toronto city] clerk to organize and administer a free and fair election. We can’t have concerns about the validity of our elections.”

But Hunter quickly adds that she’s “thrilled” to be here and voices her support for rural Ontario. The lingering mess in Toronto political circles, she adds, is one of Ford’s own creation.

Suffice to say, locals attending the rural expo don’t much care about the size of Toronto’s city council. If anything, the day afforded them a rare opportunity to chat with politicians about concerns urban voters might not worry about, like poor Internet coverage.

“You got to keep a balance between urban concerns and rural concerns,” says Nigel Brown, a landscaper and apple orchard farmer from Guelph, Ont. who attended with his two children, and got a photo with Ford. “If this were a one-off farm tour, I’d say stay in Toronto. But this is a major cultural event for rural people.

“It sucks if you’re in Toronto and you’re obsessed with Toronto politics, but there is the rest of the province,” Brown adds.

One of the few reminders of the provincial capital’s ongoing crisis came when protesters briefly shouted down Ford’s speech at the opening ceremony, carrying a sign that read: “Don’t Plow our Charter.”

“[The Tories] held a midnight sitting so they could come down here, do photo-ops, and demonize Toronto for the local folks,” says Aliya Pabani, one of the protesters.

While local people were for the most part civil to the protestors, one angry attendee told Pabani to stick the banner—well, let’s just say it was something less than typical rural friendliness.

After politicians spent the afternoon shaking hands and chatting with more locals, and before the MPPs could board their buses and head back to Toronto, the final event was to be held: the traditional plowing match between party leaders, located a short walk from the main grounds of the expo.

Ford was first up driving a very-much-on-brand blue Ford 3000 tractor. Orange, red and a green tractors were lined up for the NDP, Liberal and Green Party representatives.

But as the leaders showed off their tractor-driving skills, the audience had dwindled to mostly journalists and partisan political staffers. Few outside the bubble, evidently, cared enough to cross the street to watch.