How free expression is being gagged by anti-Trump backlash

Opinion: Many have responded against a renaissance of hate, but regrettably, part of that response has been to call for suppression of free speech 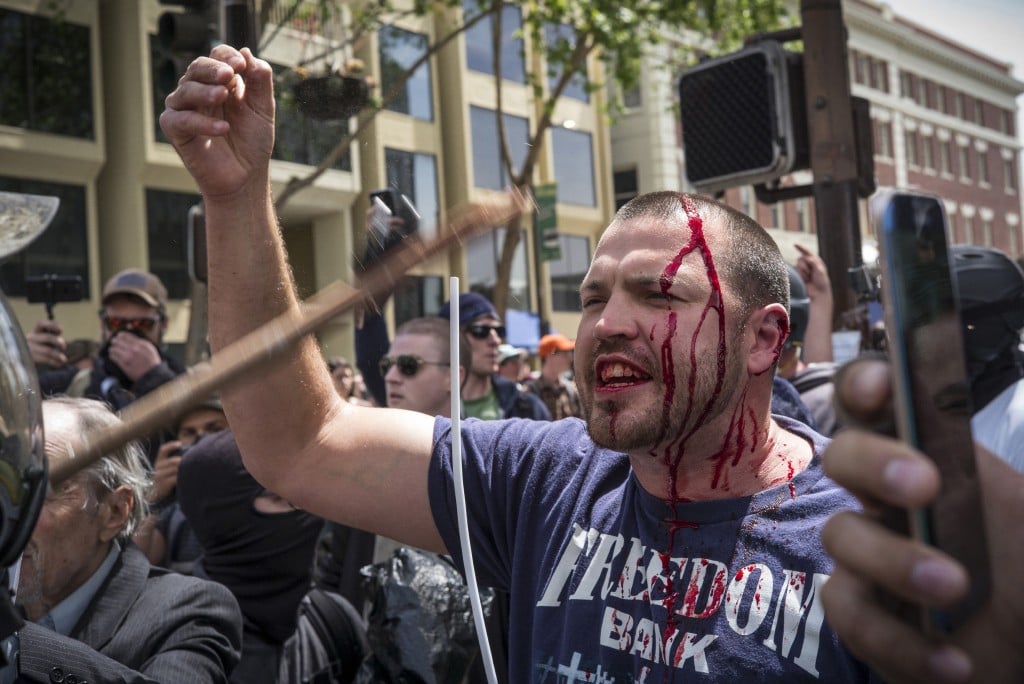 A supporters of President Donald Trump yells at the crowd after being bloodied in a clash with protesters at a rally at Civic Center Park organized by the Trump supporters in Berkeley, California, April 2017 . (David Butow/Redux)

We are living in difficult and worrisome times.

There has been a resurgence of racism, misogyny, anti-Semitism, Islamophobia and nativist nationalisms in many parts of the world — including Canada.

This renaissance of hate has been intensified by the actions of Donald Trump before and after his election. Fortunately, many have responded against the hate. For some, regrettably, part of that response has been to call for suppression of free speech.

READ: Donald Trump gets close to sanity—physically, that is

As the director of the Centre for Free Expression at Ryerson University, I was deeply troubled when Ryerson recently decided to cancel a panel discussion whose topic, ironically, was to be “The Stifling of Free Speech on University Campuses.”

The panel discussion — scheduled to include University of Toronto psychologist Jordan Peterson and former Rebel Media journalist Faith Goldy — was not a march riddled with Klan and neo-Nazis. It was a group of three conservative academics and one right-wing journalist whose ideas are odious to many people, including me. But then, my ideas are likely odious to them.

The university said it cancelled the event after a security review concluded it was “not equipped to provide the necessary level of public safety for the event to go forward.” The violent confrontation and deaths in Charlottesville may have both spooked Ryerson officials and made their decision seem prudent to many.

Opponents of the planned panel contributed to the fears — with their Facebook page headlined “No Fascists in Our City” adorned initially with a photo of a crossed-out swastika and a call for mass turnout to stop the panel. “This shit stops now. Either you’re with us or you’re not….”

MORE: The false equivalency of the criticism of the ‘alt-left’

In cancelling the event, Ryerson gave in to intimidation, prevented a panel discussion of difficult ideas and disagreement over deeply held views, and denied free speech rights to those with opposing views.

Part of freedom of expression is the right to dissent, protest and criticize, but that right does not extend to intimidation, harassment or violence that denies others their free speech rights.

Differences of views are the lifeblood of any university and essential to the mission of advancing knowledge and educating students. Most universities even have statements of principle that guarantee and support free expression.

Yale University’s statement says “to curtail free expression strikes twice at intellectual freedom, for whoever deprives another of the right to state unpopular views necessarily also deprives others of the right to listen to those views.”

The University of Toronto’s statement of purpose guarantees the “rights of freedom of speech, academic freedom, and freedom of research. And we affirm that these rights are meaningless unless they entail the right to raise deeply disturbing questions and provocative challenges to the cherished beliefs of society at large and of the university itself.”

Ryerson’s decision to cancel the event violates its own Freedom of Speech policy which states:

“Ryerson does not avoid controversies, difficult ideas, or disagreements over deeply held views. When such disagreements arise within the University or within a broader social context, the University’s primary responsibility is to protect free speech within a culture of mutual respect. The right to freedom of speech comes with the responsibility to exercise that right in an atmosphere free of intimidation and in an environment that supports the free speech rights of those with opposing views.”

This is not a new issue. During the anti-Communist hysteria of the McCarthy period in the 1940s and early ‘50s, many universities abandoned their commitments to academic freedom and freedom of expression. Loyalty oaths were imposed on faculty and many professors accused of being Communists were fired.

In her book No Ivory Tower, Ellen Schrecker summarized the role of the universities during this period: “In its collaboration with McCarthyism, the academic community behaved just like every other major institution in American life. Such a discovery is demoralizing … . Here, if anywhere, dissent should have found a sanctuary. Yet it did not.” 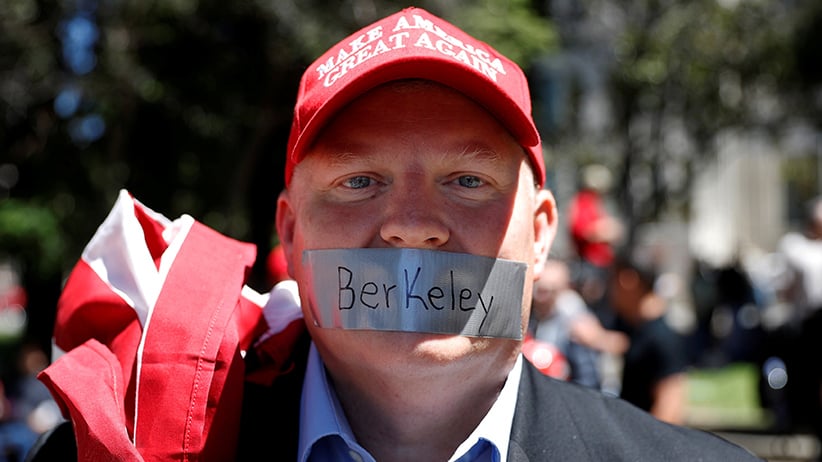 A man looks on as opposing factions gather over the cancelation of conservative commentator Ann Coulter’s speech at the University of California, Berkeley, in Berkeley, California, U.S., April 27, 2017. (Stephen Lam/Reuters)

That harmful legacy of university cowardice and complicity took years to overcome. We need to remember this past if we do not want to relive it, albeit in the name of new passions and different ideologies and concerns.

Instead, it appears as if we are starting down a dark road that threatens the raison d’être of the university and the fundamental rights to freedom of expression guaranteed by Canada’s Charter of Rights and Freedoms.

If standing by its principles requires a university to make a greater investment in security personnel to protect freedom of expression, that must be seen as a proper cost of doing business.

READ: The death of free speech? Come on.

If threats continue to blossom, then there needs to be discussions with governments to ensure universities have the additional financial resources to ensure free expression does not fall victim to intimidation.

Not only are censorship and suppression fatal to the purpose of the university, they undermine the foundation of democratic society.

When individual rights to freedom of expression are diminished or taken away for an allegedly good cause, they are necessarily invested in some higher authority that is given the right to determine what is acceptable.

The result is censorship from above — ultimately the state — with the likelihood that the champions of that censorship today are its vulnerable targets tomorrow.