How Harper parties the partisan way 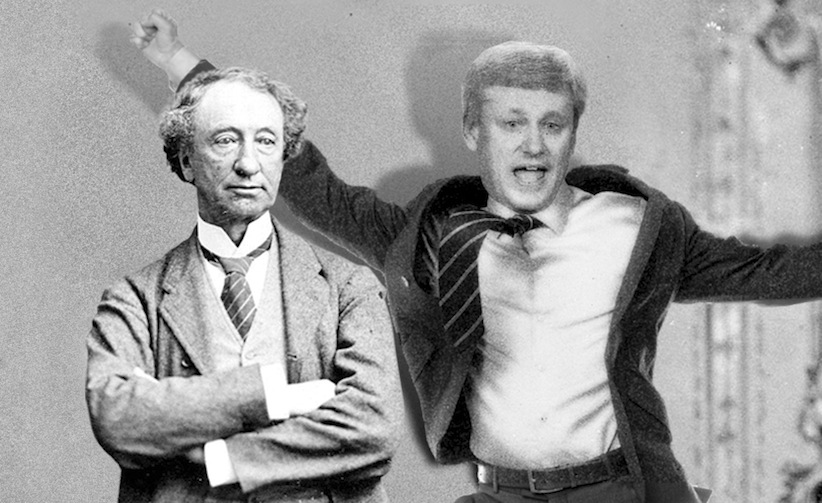 Critics sure are hot at the Harper government over the way it celebrates Canada’s history. And all because it spent millions to mark the 200th anniversary of the birth of Conservative PM Sir John A. Macdonald—but relatively little to commemorate 50 years of the Canadian flag, which was introduced under a Liberal PM.

It’s like the old saying goes: History is written by the victors. Or that other old saying: Multi-million-dollar, taxpayer-funded ad campaigns selectively commemorating that history for nakedly partisan purposes are written by high-priced communications consultants, or possibly a sentient algorithm of some kind.

But it must be asked: Is this criticism of the Conservative government fair? Is Stephen Harper really so petty as to blatantly favour the historical achievements of those with whom he shares ideological views or partisan leanings?

Yes. Yes to both questions. Double duh. And the Harper government may be just getting started. In fact, it’s not difficult to imagine the Conservative communications plan for future ad campaigns, should Harper win re-election this fall:

This multi-million-dollar, taxpayer-funded ad campaign will take us back to a simpler time: October. It will challenge the elitist notion that historical history is more important than super recent history. It will also include, like, three photos of Justin Trudeau looking sad. Tagline: “Canada—great since 2006! Pretty unremarkable before that.”

April 2016. Occasion: The fifth anniversary of the launch of Sun News Network.

Let’s launch a multi-million-dollar, taxpayer-funded ad campaign that honours the pluck of a titanic media corporation that overcame the odds and attracted tens of viewers to its 24/7 exercise in right-wing wish-fulfillment and clingy blouses. Great news: We’re told the ads can feature fresh “hot takes” from pundit Ezra Levant! (Little-known fact: Ezra continues to perform his show each evening because he believes news of his network’s demise is a left-wing conspiracy. His “camera operator” is a mop.)

May 2017. Occasion: The 50th anniversary of the Toronto Maple Leafs’s last Stanley Cup.

There’s local political advantage to be gained from a multi-million-dollar, taxpayer-funded ad campaign that pays nostalgic tribute to the team’s 1967 accomplishment. Meanwhile, outside of Toronto, let’s just run some bloopers from the past half-century set to the theme from The Benny Hill Show. It’s a win-win.

The whole Canada thing was totally the idea of Sir John A. Macdonald, who was a Conservative, which means that he and Stephen Harper are exactly the same. That = math.

September  2018. Occasion: The six-billionth anniversary of the colour blue.

We need a multi-million-dollar, taxpayer-funded ad campaign to remind people that without blue—which is the most trusted colour in uncertain times like these—the lakes on our maps would be orange or maybe even some shade of magenta. Just like the terrorists probably want them to be! Tagline: “Blue— just keep thinking about it until it affects your voting judgment subliminally.”

March 2019. Occasion: The 10th anniversary of the first TV commercial for the Economic Action Plan.

April 2020. Occasion: The 10th anniversary of the time Stephen Harper tried to change the national anthem to include the word “dost.”

Do Canadians remember when he did that? No? Good. This multi-million-dollar, taxpayer-funded ad campaign is designed to make them keep forgetting that ever happened.