How John Tory remade himself into a winner—and a mayor

John Tory could have been one of our greatest political mighta-beens. Now, he's tasked with healing a scarred Toronto. 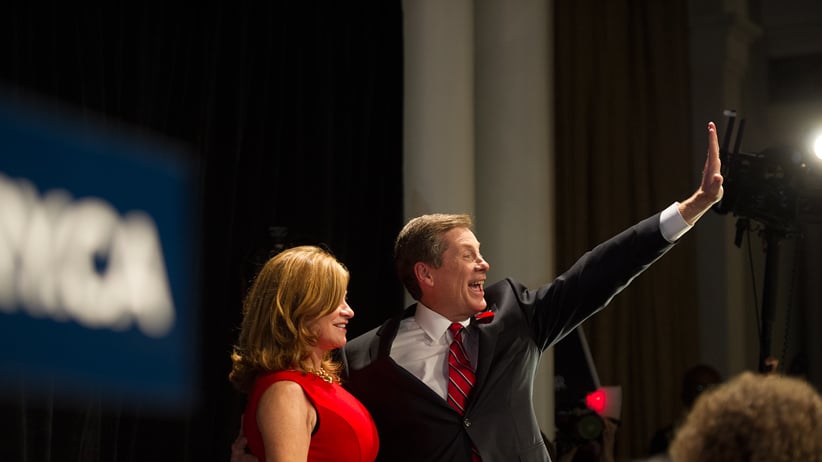 The resurrection began last December, when a throng of well-wishers crammed into a pub near the University of Toronto in hopes of convincing John Tory—much-respected, oft defeated—that he need not go down as a great political mighta-been. Tory and his wife, Barbara Hackett, had arrived to find the Duke of York, a faux British pub old enough to feel like a fixture, stuffed to its wainscoting with the sort of people who deliver election wins: strategists, bagmen, sitting politicians eager to offer up their personal endorsements.

For months, veteran operatives had courted the 60-year-old, beseeching him over quiet coffee breaks and drinks on cottage decks to fill the leadership chasm left by Rob Ford’s personal implosion. They invoked his sense of civic duty, worrying aloud that Canada’s largest city was tearing itself apart. More than ever, they said, Toronto needed a unifying figure to serve as its mayor.

Tory had qualms. “He wanted to know if what we were talking about was a viable proposition,” recalls campaign strategist Bob Richardson. But he also wanted to get back in the saddle, Richardson adds, and, on this night, the bar crowd seemed the embodiment of a winning coalition—liberal and conservative; urban and suburban; young and old. Brad Duguid, the minister of economic development in Ontario’s Liberal government, was there, despite having sparred with Tory seven years ago when the latter led the provincial Progressive Conservatives. So was Jaye Robinson, a city councillor who’d won her seat in 2010, even though Tory had endorsed her opponent.

So impressive was the array of support—and so obvious its impact on Tory—that Hackett announced she was starting a counter-party at the restaurant next door to convince her husband not to get sucked in. The wisecrack drew big laughs (Hackett is known for her zingers). But it also summoned the gnawing doubt that crept into any conversation about Tory’s political prospects. After three losses in four elections and by-elections, he might have been the best-liked, most privileged man ever to wear the mark of a political loser. On Monday, Tory finally washed that taint away: In winning the Toronto mayoralty, he slammed the door on the tumultuous Ford era, while garnering one of the highest vote tallies of any politician in Canadian history (recall that even federal and provincial leaders run at the riding level). But, in doing so, he became mayor of a vast, dysfunctional and divided city that simmers with political turmoil, even as it welcomes him. Governing it will make pulling down the Ford circus tent look easy by comparison.

Related:
Video: John Tory on a ‘new era’ at Toronto city hall
Rob Ford vows comeback after brother’s mayoral loss
Toronto election: The vote without a moral core
How the great Ford divide could come to a city near you

It is a job that Tory, for many years, seemed born to do. The scion of a family that launched an iconic Bay Street law firm, he personified the city as it imagined itself: smart, compassionate, clean-cut and, above all, powerful. His brief legal career led to a series of executive and board appointments at the top of the city’s corporate and non-profit worlds, which provided contacts Tory could use to boost his growing interest in politics.

Civility and equanimity became his brands. At Rogers Communications (which owns this magazine), where he held a series of executive roles from 1995 until 2003, former colleagues recall Tory’s ability to maintain poise while fulfilling the demands of the company’s hard-driving founder, Ted Rogers. At the time, he surprised some by privately admitting he dreamed of hosting his own radio show: “By then, he’d already run one of the biggest radio companies in the country [in Rogers Media],” said one former colleague, who asked that her name be withheld. “It seemed rather modest. But he talked about it all the time.”

Those qualities allowed Tory to ignore divisions of class and partisanship, and his grace under fire turned him into a go-to man for organizations in crisis. At Rogers, he helped navigate the public relations quagmire of negative-option billing. As volunteer chairman of the Canadian Football League, he helped steer wobbling franchises to financial stability, and oversaw the wind-down of the league’s doomed experiment with U.S. expansion.

A reputation as a fixer, however, does not always set one up for electoral success. In 2004—a year after he’d lost the Toronto mayoral race to David Miller—a desperate Ontario PC party sought out Tory as a stabilizing leader after the divisive years under Mike Harris had driven it from power. What followed stands as one of the great train wrecks in the province’s political history: Tory, having won a safe seat in a by-election, blew an opportunity in the 2007 general election to unseat Dalton McGuinty’s Liberals by proposing public funding for faith-based schools—anathema in a province where funding for separate Catholic boards still rankles.

Not only did he lead his party to defeat, he lost the riding-level contest in Don Valley West to Liberal Kathleen Wynne, who would go on to become premier. Then, in a by-election two years later, Tory lost again, prompting an ignominious resignation as leader. He retreated to what friends say was a fulfilling life on corporate and charity boards, as well as the radio-hosting role he’d once imagined for himself. When Richardson came knocking with a clutch of politicos—conservative insider John Capobianco, former deputy mayor Case Ootes and former council candidate Ken Chan among them—you could have forgiven Tory for refusing to answer the door.

But answer he did, setting in motion the courtship that culminated in Tory throwing his hat in Toronto’s mayoral ring on Feb. 24. Did he come back out of civic duty? Or out of a burning desire for redemption?

A bit of both, says Richardson. He recalls wooing Tory in the summer of 2013 at a cottage on Lake Simcoe. “This is a guy who has been committed to public service all his life, and that ended. You’re bruised after an experience like that, but John is the kind of guy to pick himself up and dust himself off.”

The political landscape he returned to, though, demanded a combination of aggression and self-control that Tory would have to learn quickly—or become a four-time electoral failure. The Ford brothers had successfully pitted working-class voters in the city’s inner suburbs against wealthy downtowners and—as with any form of identity politics—impressions mattered more than fact. They’d claim they’d “delivered” subways to suburban Scarborough when shovels had not yet pierced the ground. They’d claim they never raised taxes, when, in fact, Rob Ford voted in favour of a property tax hike in 2013.

Chris Eby, Tory’s communications director, refers to the new norm as “post-fact politics,” where candidates use narrow scripts to create “narratives” about themselves and their opponents. Tory didn’t exactly embrace it, but long-time friends were surprised by how comfortable he seemed within its strictures. “He’s a lot tougher and more disciplined than before,” says Adrian Montgomery, who was part of Tory’s campaign team for the 2003 mayoral race. “If you ask him a question about where he’s going to take his grandkids trick-or-treating, he’d work SmartTrack (Tory’s keystone mass-transit proposal) into the answer. The old John Tory would never have done that.”

To be sure, playing tough risked compromising Tory’s bona fides as a conciliator. Many who know him were stunned, for example, to see him on the attack the day Doug Ford replaced his cancer-stricken brother on the mayoral ticket, slamming Doug as “an insult machine” whose politics are “the same and maybe worse.”

But now that he’s won, experts think Tory’s harder shell will serve him well. More than a divided city, he faces a notoriously ineffectual council, and must pry money from the provincial and federal governments to fulfill promises to build transit, repair infrastructure and maintain social housing—all without resorting to new taxes. “He’s going need to muster all the toughness he can,” says Martin Horak, a political scientist at Western University in London, Ont. “The inertia on council is tremendous. Everyone’s become used to log-rolling, scratching each other’s backs and voting for their own parochial concerns.”

Jaye Robinson, the first councillor to publicly endorse Tory, agrees: “It’s trench warfare down there. It’s going to be an eye-opener.” But she holds out hope that Tory’s instinct for consensus-building will prevail, mending the rifts in a disparate city shaken by Ford’s polarizing politics. As he stood before the cameras on election night, Tory at least showed the will to deliver on that hope. “It’s time to unite as one city, one Toronto,” he declared to a cheering crowd in a west-end event hall. “A Toronto that is once more known as a beacon of respect for everybody. A Toronto that is true to our shared values.”

With that, the resurrection ended. Now, the hard work of healing a badly scarred city begins.

CORRECTION: A previous version of this story incorrectly stated that John Tory had garnered more votes than any politician in Canadian history. It also identified Ken Chan as a former city councillor when in fact Chan ran for Toronto council in 2010 but lost.