How Justin Trudeau is changing the rules of politics 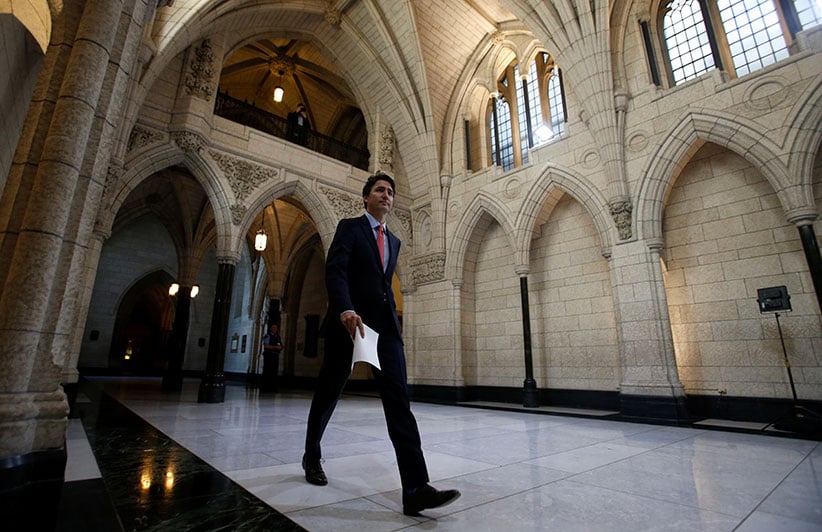 When Justin Trudeau admitted that his government was screwing up the electoral reform file, my first thought was of Steph Curry, the once underrated player on the Golden State Warriors who has transformed the game of basketball. Like Curry, who deploys the high-risk three-point shot the way other players rely on the conservative layup, Trudeau is changing how the political game is played and putting massive poll numbers up on the board.

“We were perhaps behaving in a way that was resembling more the previous government,” Trudeau told stunned reporters as he explained that he would cede to opposition requests to more fairly distribute seats on his electoral reform committee—a sudden and surprising climbdown. Did Trudeau just compare himself to Stephen Harper? Yes, he did. This was after he’d already reversed course on the assisted-dying bill’s Motion 6, which would have limited opposition debate. And after he’d apologized—numerous times—for the infamous elbow incident. Trudeau was just doing what he has done since the campaign: breaking the five cardinal rules of political communication.

1. The flip-flop rule: Reversing decisions makes you look indecisive. Stick to your promises or people will stop trusting you.

2. The loser rule: Never repeat your negatives because you end up validating them. It goes without saying that you don’t compare yourself to the man you just defeated.

5. The wimp rule: Never give in to the opposition’s criticisms. Their job is to oppose. Your job is to lead.

Stephen Harper codified these into a form of political brutalism. “The standard Tory-machine approach to public messaging involved defining a simple storyline, driving that storyline in all places and on all occasions, never wavering from the message and the mass disciplined dissemination of that narrative through numerous channels,” Tim Powers, the vice-chairman of Summa Strategies told me. Sometimes it worked. When Harper first came to power, he had a “promise made, promise kept” mantra. But that didn’t last. “As the credibility of the Conservatives was wearing thin, the automaton sales pitch was also losing its gloss,” Powers says. “Trudeau gambled that a little bit of vulnerability and appearance of humanity was a better potion—he was proven right.”

It was more than just a bit of vulnerability. During the campaign, the Liberals released an ad where Trudeau broke the loser rule and repeated the negative about his inexperience: “Stephen Harper says I’m not ready.” The Conservatives were thrilled. But instead of backfiring, it was a hit.

Look at the debate swirling around Canada’s CF-18 jets. Trudeau’s government is openly flouting the flip-flop rule. The Liberals promised to have an open and transparent competition to find a new jet, but now the government is preparing to sole-source the Super Hornet, exactly what Liberals criticized the Conservatives for doing with the F-35. I suspect they will back down in some fashion—after all, that’s the pattern. Will the deficit be $10 billion this year as promised? No. Way bigger. Did the government get 25,000 Syrian refugees in by Christmas? No. Will the Liberals settle the lawsuit with wounded veterans over the government’s alleged obligation to them, as they promised? Nope. This week, the six veterans are back in court. Why isn’t any of this hurting the party?

The answer is the authenticity gap. Trudeau’s great political insight is that people prefer an authentic response over a scripted one, even if it breaks a promise. “Younger voters want a more authentic and real connection to the people they are voting for,” says Ian Capstick, the founder of Mediastyle. “When everybody has the same ability to ‘control the message’ through social media, the ability to lose control of the message becomes the professional’s move.” In other words, less control is more.

Politics is not so different to sports. In 2010, the Golden State Warriors, a loser franchise, was bought by a group of Silicon Valley data junkies. As the Wall Street Journal pointed out in a fascinating article, the new owners saw an underused part of the game: the three-point shooting line. Established in 1979, the line was meant to reward high-risk shots with one extra point. Until recently, only 22 per cent of shots taken in a game were from behind the three-point line. But the Warriors owners found the difference in success rates between shooting a bit inside the line and a bit outside the line was minuscule. The results, however, were game-changing. As Ben Cohen writes: “By moving back just a few inches before shooting, a basketball player could improve his rate of return by 43 per cent.”

That changed everything. This year, Curry sunk 402 three-point shots. The former record was 286—which he also held. His team broke the record for most wins in the regular season in NBA history.

Is the authenticity gap the political equivalent of the three-point shot? Maybe. Every time Trudeau fades back and launches another of his high-risk moon shots—legalizing pot, pricing carbon, buying navy ships, changing the way elections are won—you think he’s going to fail.

There are misses, for sure, lots of them, as Trudeau is the first to admit. But when he scores, he scores big. The age of political incrementalism, the policy layup shot, is over. Trudeau is breaking the rules and hitting all net. See you in the second quarter.